The last remaining construction task on the RV-12 was cutting a hole in the inspection cover under the fuel tank for the CAV-110 fuel drain valve. This will complete a modification to the fuel system that added a sump and fuel drain point under the RV-12’s fuel tank. With the exception of the wheel pants (which will be installed after the RV-12 is painted) drilling the hole for the CAV-110 fuel drain will complete the fuel system modification and marks the completion of construction on the Dog Aviation RV-12 for the time being.


Because the CAV-110 fuel drain valve extends below the belly of the aircraft, it is necessary to cut a hole into the F-1276B cover plate for the valve to protrude through. That created an issue with trying to find the location for the center of the hole that need to be drilled for the fuel valve. I’ve had many months to think about that task and came up with an easy solution. A little liquid Boelube was rubbed onto the flange on the CAV-110 valve, next four 1 ½" #8-32 screws were inserted through the holes in the F-1276B cover plate and started in the nutplates to keep the cover plate aligned with the opening as the cover plate was slid up the screws until it touched the CAV-110 valve which ultimately left a perfect circle of Boelube on the cover plate. The hole was center punched and drilled. 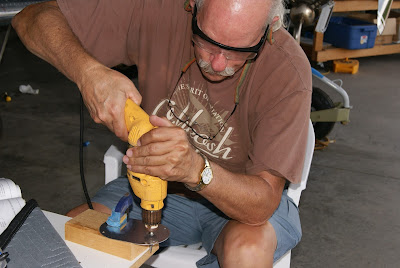 Using a step drill to drill the hole in the F-1276B cover plate for the fuel valve. This is the first of two step drills used to create the 7/8" hole necessary for the grommet. 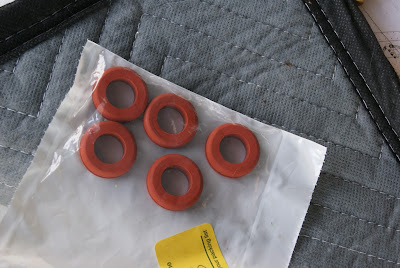 The grommet chosen requires a 7/8" hole be drilled in the cover plate and has a center hole diameter of 9/16". Unfortunately, McMaster-Carr only sells the grommets in bags of 5 ... good thing they are inexpensive.


The silicone grommets chosen are outdoor rated and have a center hole of 9/16" and required a 7/8" hole drilled in the F-1276B cover plate with a large step drill. 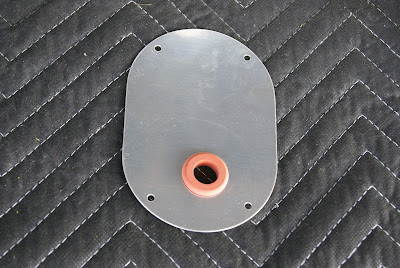 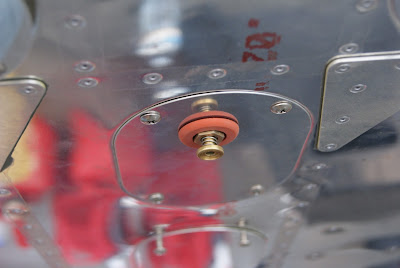 The completed instillation of the CAV-110 fuel valve modification. The outdoor rated silicone grommet installed in the F-1276B cover plate gives the instillation a finished look. Plus, the grommet is a reddish orange and is easy to spot.