A Bump In The Road To First Flight

Yesterday, while fine tuning the audio system to my satisfaction,  I decided to also update the Dynon SkyView’s mapping database. While in the setup menu, I took a closer look at the settings for the ADS-B receiver. Ever since the instillation of the ADS-B 470 receiver, there has been a notification in the warning box saying “ADS-B IN OFFLINE”. Because of the insurance donut hole (mentioned a few posts prior) I have been powering the SkyView up inside the hangar and figured I was just not receiving the ADS-B signal … and that may be true, but the result in the status menu will be “No Signal” not “Offline”. Having never gone through the process of installing an ADS-B receiver before, I had not really picked up on the fact that there was an issue with the ADS-B 470 box.


What really got me to the conclusion that something was drastically wrong with the ADS-B 470 box was when I dug into the menus and had a look at the ADS-B status menu ... where it said “Not Found”!!! That’s not good. I had noticed when looking at the serial port setup menu that the receive counter for serial Port 2 was always 0 and not incrementing, but figured that was because I was inside a hangar and not receiving data …. wrong! I have since come to understand even though there is no ADS-B signal being received, that counter should be clicking away continually because the ADS-B box is always being polled by the SkyView. 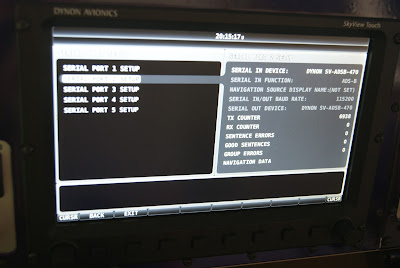 The RX counter should not be zero … it should be steadily incrementing.

I placed a call to Dynon's tech support and left a message, a short time later I received a call from Mike at Dynon support and proceeded to explain to him what I was seeing. Mike said the issue appeared to stem from no received data from the ADS-B 470 box. Mike wanted me trace the continuity of the wires between the ADS-B box and the SkyView (Mike said it is a common mistake to flip-flop the wires) … then give him a call back with the results. For those RV-12 builders that need to go through this process, I can save you some time. The Van's configuration file and wiring harnesses for the RV-12 is wired and configured to place the ADS-B 470 on SkyView's serial Port 2. As such, the DB-9 connector that plugs into the back of the ADS-B 470 box is wired for the RV-12 as follows:


(As a side note for builders that have not configured the Dynon ADS-B 470 on serial Port 2 … table 47 on page 14-5 of the SkyView System Instillation Guide Version 11 shows where to wire  the ADS-B 470’s transmit and receive wires to the SkyView's DB-37 connector depending on which serial port is desired).


In my case,  much to my relief, the wiring buzzed out OK. So there were no wiring errors to contend with. This leaves only two possibilities … a bad serial Port 2 in the SkyView or a bad ADS-B 470 receiver. I called Mike at Dynon and informed him the wiring was indeed correct. At this point, we discussed a plan to verify Port 2 in the SkyView was working. That plan involved configuring for a loop back test.


For the loopback test, the ADS-B 470's DB-9 connector is left removed from the ADS-B 470 box and Pin 2 of the DB-9 connector is connected to Pin 3 using a jumper. The DB-37 connector is reconnected to the back of the SkyView and the SkyView is powered up. For the loopback test, serial Port 2 is temporally reconfigured by changing the device name from SV-ADSB-470 to NMEA basic device and making sure both serial in and out ports are configured as NMEA basic. What this does is transmit a known data string pattern on the transmit wire from Port 2 and the loopback at the DB-9 connector sends the data string back to the Skyview’s Port 2 on the receive wire.


The above is achieved by changing the settings for serial Port2  at the location listed below:

After making the above change for the loopback test, I could see both transmit and receive counters incrementing steadily with no errors …. Meaning, serial Port 2 in the SkyView was in good shape and capable of sending and receiving data … so the failure was definitely inside the ADS-B 470 receiver box. 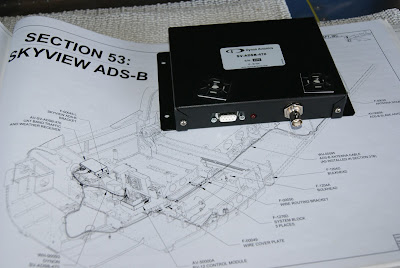 A fine example of infant mortality in the world of electronics. This ADS-B unit was broken the day it was installed, I was just not savvy enough to pick up on it. Failures are most likely to occur early on … if an electronic device lasts 30 days or so, it will likely give many years of trouble free service.


I packaged the ADS-B receiver up and sent it out to Dynon for a quick exchange, so hope to have the unit back by the end of the week. I think at this point I’m inclined to hold off on the first flight until I get the ADS-B unit back so I do not have to deal with installing, removing and installing the upper fuselage skin. Because as fellow RV-12 owners know, this can be a chore when the canopy is installed.