Finished up installing the RV-12’s interior and discovered two minor issues. The piece of carpeting that covers the center tunnel in the area under the instrument panel has a recess cut into the forward edge of the carpet for the wiring bundle … unfortunately, that recess is not big enough because of the much thicker brake lines, the additional tube for the static line going to the backup instruments and the ADS-B coax cable. As such, the carpet can’t be placed as forward as necessary so the edges that should be close and parallel to the firewall are not. Because of the alignment issue I did not attach the Velcro strips for that piece yet. Will need to take the carpet piece to a tailor at some point in the near future and have the recess made both a little wider and deeper.


The other issue involves the interior trim piece that covers the air vents. This piece has a cutout for the air vent but it is completely covered with a fine mesh material. Installing the trim piece will require cutting a slit in the mesh for the lever that controls the position of the vent. This, in and of itself, is not a big deal but the mesh is fine so I feel it will really significantly cut down the airflow. So at this point, I left the piece off until I make a decision … leaning towards removing the mesh all together. Guess I could fly the plane without the piece in place and see just how much air the vent produces then install the panel and compare the airflow with the mesh in place and go from there. 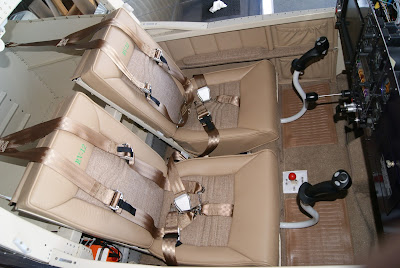 Seats and interior carpet in place in the cockpit area. 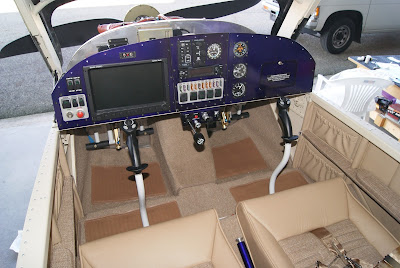 Photo of the interior carpet under the instrument panel. These pieces are just loosely set in place because the center tunnel piece needs to be tweaked as mentioned above. I didn’t realize it at the time, but the issue with the wiring bundle can’t be seen in this photo. One of the previously mentioned air vent can be seen to the right of the right control stick.


One of the few remaining tasks that needed to be accomplished was adjusting the takeoff trim position that is displayed on the EMS. I was searching for the words “trim” calibration or some such thing and couldn’t find it listed on the EMS calibration page. That sent me on a tangent referring to the SkyView documentation with no joy   … well it IS there …. it is listed as “elevator” and not trim. The calibration wizard can be accessed by going to SETUP MENU > HARDWARE CALIBRATION > EMS CALIBRATION> ELEVATOR. Calibration is easy …. the SkyView has the user run the trim motor full down and full up then has the user place the trim in the takeoff position to complete the calibration. Based on what other builders have suggested, I set the trim takeoff position to 1 7/8". This is done by moving the control stick full aft and measuring the distance from the aft edge of the anti-servo tab to the aft edge of the stabilator. This should be a safe initial starting point and can always be readjusted later if desired. 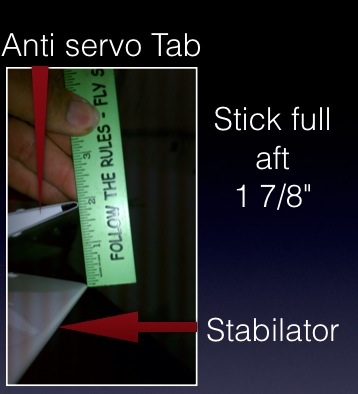 Photo posted on the VAF forums by John a builder in Texas that shows a good starting point for setting the position of the trim tab for takeoff.


While the SkyView was still powered up, decided to pre-set some frequencies into the Garmin GTR200 radio following the Garmin User manual. Also decided to adjust the blaring stall warning sound down from a mind-numbing screech to a level louder than any of the other audio signals, but not blaring. The Garmin radio has two audio inputs … AUX 1 is for the stall warning tone and AUX 2 is for annunciations coming from the Dynon SkyView.


To reduce the stall warning sound level, the adjustment was made at the Garmin radio using the volume adjustments for the AUX 1 input. There is also an adjustment potentiometer on the AV-50000 module as well, but I did not play with it.


I discovered a little background noise in the headsets coming from the Skyview …feel it is originating from the SkyView because the sound is in sync with the clock seconds. It was getting late evening so decided to leave this for the next work session … will try turning down the EFIS potentiometers on the AV-50000A module a bit to see if it helps since the radio has tons of gain available for the audio input. This may be a sound that is being transferred from wires running adjacent to the music inputs. I still have the music inputs muted so will need to do a little experimenting to find out what the deal is.
Posted by John at 8:22 AM