Frequent readers may have been wondering when the first flight of the DOG Aviation RV-12 will occur ….. soon, very soon.


As mentioned in the previous post, it was necessary to remove the wings to install the F-1228 cover. Two Sundays ago after the MAPS museum’s pancake breakfast, Bernie and Mike K. gave me a hand removing the wings so the F-1228 seat floor cover could be installed down over the flap handle. Now that we have done it a couple of times, the process was a snap … it took far longer to get all the screws in the cover plate than it did to remove and replace the wings.


While I had the flap handle disassembled, I used the opportunity to remove ½" from the VA-114 spring inside the flap handle. This makes the button far easier to push and reduces the likelihood of pinching fingers or thumb on the button. This was done in accordance with Van’s Notification 15-10-01.


Then the monsoons hit …. it rained every day last week, so I didn’t get much done. I figured there was no urgency, so why spend time in a cold damp hangar listening to the defining sound of rain hitting the metal roof if it is not necessary? However, the time was not entirely wasted in that custom made checklists were printed out and laminated.


This week during the last few work sessions all the covers for the center tunnel and baggage bulkhead have been installed along with most of the interior pieces. I did run into a small issue installing the F-1230 tunnel cover. This is the cover that readers may recall needed to have the slot for the wiring harness cut out a little larger (this was done months ago during a trial fitting). Then installing the cover I had troubles getting it to seat correctly … it would not slide down low enough around the bundle of wires and brake lines. One of the brake lines was interfering with the cover. Further investigation revealed the stiffness of Bowden cable for the parking brake was the root of the problem … in that, it was preventing the brake line from moving downward. The cable for the parking brake had been routed behind the brake lines going to the parking brake and prevented the brake lines from moving. The solution was to reroute the Bowden cable on top of the brake lines in the valley between the two lines. This solved the issue and actually made for a better instillation but sucked up most of an afternoon in the process. Unfortunately, I did not take any photos. 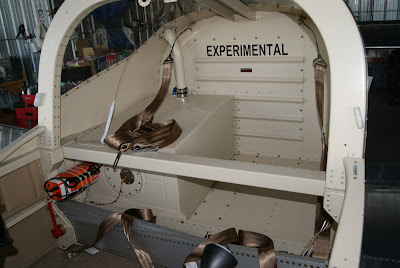 Installing the F-1227 seat ramp cover, and the remaining baggage floor covers and the modified F-1207F baggage bulkhead went smoothly, but took a toll on my knees and legs because of the position necessary to lean over the cross brace to gain access to the screws in the baggage area.


At this point, I was planning on balancing the audio, but got sidetracked and decided to install most of the interior carpet and side panel kits. Mainly because I did not want my shoes to scrape up the paint when pushing on the rudder pedals. At first I was only going to install the one piece of carpet but decided to just go for it and install them all in the cockpit area. All went smooth for the most part, but it took much longer to install the Velcro strips than I thought it would. But the end results look nice. 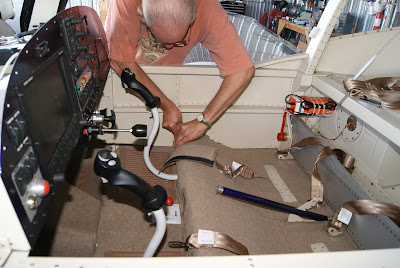 Working on installing the carpet over the seat pans.


I discovered there is a long piece of Velcro that needs to be installed underneath the spars. Not going to happen now … so I just have it laying there stuck to the carpet for the time being because I am not removing the wings just to install a strip of Velcro. Will make a note of it so the next time the wings come off, I can install the Velcro.


Note to fellow builders that have purchased the carpet kit. While you have the wings off to install the cover plate that goes over the flap handle do yourself a favor and install the carpet for the seat pans at this time.


The side panels are installed by placing a bunch of Velcro strips on the inside of the fuselage skin and setting the panels in place. The panels are a very snug fit and shaped perfectly … nice job Abby! 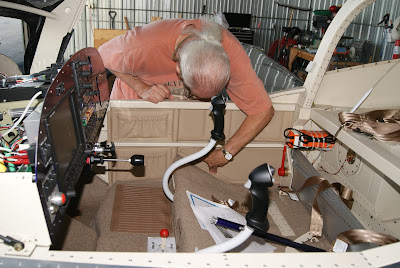 Installing one of the side panels on the right side of the DOG Aviation RV-12.


Did not have enough time to finish installing the arm rests, so will finish that up first thing during the next work session. I have a carpet kit for the baggage area as well but will hold off on installing that until my knees recuperate a bit.
Posted by John at 7:18 AM