Taking advantage of a one day heat wave, got into the shop and drilled out all the rib grommet holes to 7/16” using a step drill and a 7/16” drill bit for the inboard ribs where the spacing prevents drill access (even with the 90 degree drill). While at it, also drilled out all the rib grommet holes for the right wing as well. The innermost three ribs on the left wing will require “creative access” more on that in a later post. 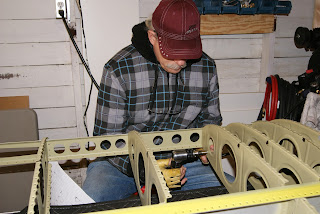 Drilling the grommet hole in one of the W-1208 nose ribs.

The additional landing light for the left wing, which will allow wig wag operation, arrived yesterday. In addition to the landing light there is a lens, mounting ribs, doubler plates, backing strips for the lens and a few pins for the electrical connector. Also decided it prudent to order the one page of the plans that has the hole cut out and rivet template. 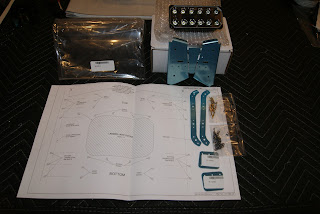 Parts to install the additional landing light for the left wing.

The left wing’s electrical connector will accommodate the light addition, but will be maxed out. The ground, stall warning, and nav/strobe wiring consumes 5 of the 8 contacts leaving three available…and that is what is need for the landing light power, wig wag power, and the master to slave (think wig wag sync) wire.

For wig wag operation all that needs to be done is wire from the right light’s master out (green wire) to the left light’s slave input (blue wire) and have power applied to both light's wig wag power (yellow wires). Note: For wig wag operation, power is NOT needed on the steady on (red) wire and if power is applied to the wig wag (yellow) wires it overrides the steady on power (if present) and places the light in a pulse or wig wag mode depending on a one or two light instillation .
Posted by John at 9:17 PM