Wow! This was a close one … while on the VAF RV-12 forum yesterday, I spotted a fresh post stating a fellow builder discovered his lighting kit template on page 40-17 did not match the holes in his parts. Unfortunately, the builder discovered this AFTER cutting out the leading edge of the wing and drilling the lens holes per the template for the lens backing plate holes and light bracket ribs.

While checking the original lighting kit parts and the newly received parts to the original template, sadly, I had the same issue as the other builder … all the holes on the template for my backing strips were WAY OFF.

Next, the new template received with the second light kit recently delivered was checked with both the old and new parts and that template was OK … not spot on, but close enough not to create any issues. Both drawings are the same date 7/12/11 and Rev 1. Apparently, the bad template was not scaled correctly when it was printed. I’m guessing for some reason the printer used to reproduce the template page must have scaled the drawing to fit page, creating a batch of missed sized drawing templates.

Below is a photo of a lens backing plate placed on top of the drill hole template … the scaling error is easily seen. 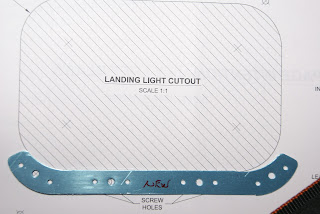 Fortunately, I have one good template sheet and a replacement on the way. The call to Van’s this morning will bring about a change in their instructions to remind the builder to verify the scale of the template pages. In Van’s defense, at the very beginning of the plans in Section 3 (Tools and Workspace), Page 4 has a reference for the template page size used throughout the plans calling for a size of 16” x 10 5/16” measured at the margins.  Incidentally, my “bad” page measured around 15 1/2” x 10 1/4".
Return from the Future: Section 3-4 of the plans tells the builder to verify that templates in the plans measure 16” x 10 5/16” at the borders.  I have had several calls to Van’s regarding that scale and the fact that the replacement templates didn’t measure up correctly nor did the PDF file Van’s sent of the template (which was printed out at a blueprint shop) or even the subsequent replacement templates received from Van’s. The mailed replacements and the output from the PDF file were all 16” x 10 9/16”.

I had a long discussion with Joe at Van’s about the mismatch just prior to Sun and Fun … so waited until yesterday (4-23-2013) to make the follow up call. Joe told me after checking with the drafting department, it was concluded the scale given in section 3-4 was incorrect. The template pages should measure 16” x 10 9/16” … NOT the 16” x 10 5/16” as stated in section 3-4.  Joe told me Van’s has a correction in the works for that typo error in section 3-4. So RV-12 builders take note of that correction and check your templates accordingly.