Today all of the A-1205 ribs were riveted onto the right flaperon’s spar along with the remaining three nose ribs. As with the left flaperon, all the ribs were riveted with solid rivets with the exception the two locations where a nose rib and aft A-1205 rib share the same rivet holes … in that case, just the center rivet was solid and the two outer rivets were LP4-3 pop rivets. 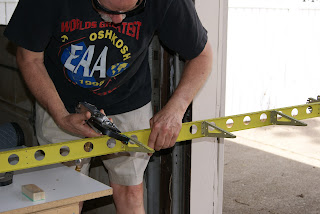 Using the pneumatic squeezer to attach the A-1205 aft rib onto the right flaperon spar using AN470AD4-4 rivets. 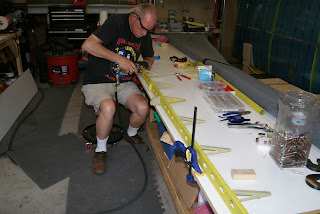 Just a few more A-1205 aft ribs left to rivet onto the right flaperon's spar. 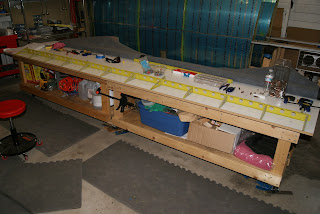 Completed right flaperon skeleton ready for the A-1202 skins.
As with the left flaperon, a deviation is being made from the plans in that the two A-1202 aft skins will be riveted onto the A-1205 ribs before the counterbalance gets riveted in place on the outboard nose ribs.
Posted by John at 8:37 PM