What’s all the fuss about installing a multi-wire control grip onto the RV-12’s goose neck W-1212 control stick? Just slide the wires through the top of the tubing, pull them out the bottom and move on … right? WRONG!! For starters, the Tosten CS-8 soft touch grips purchased by the DOG Aviation procurement department have a total of ten 22 gauge wires that need to be routed through the control stick. Ultimately, this is akin to stuffing 10 pounds of crap in a 9 pound bag because the RV-12 control stick is not a hollow tube for its entire length … it is segmented twice and has a 90 degree bend at one of the segments. Pictured below is a close-up of the RV-12’s W-1212 control stick. On the left, the viewer can see where the lower portion of the goose neck makes a 90 degree bend … at this location the viewer can also see the outer edges of a metal gusset plate that dissects the control stick, creating two inner chambers. To the right, the 90 degree transition is immediately followed by a tubular weldment which also dissects the W-1212 control stick creating two more chambers (small ones) … this tubular weldment becomes the mounting and pivot point for the control stick. It is at this location where the inside clearances are at a minimum … there is just barely enough room for five 22 gauge wires to slip by on either side of the tubular weldment. 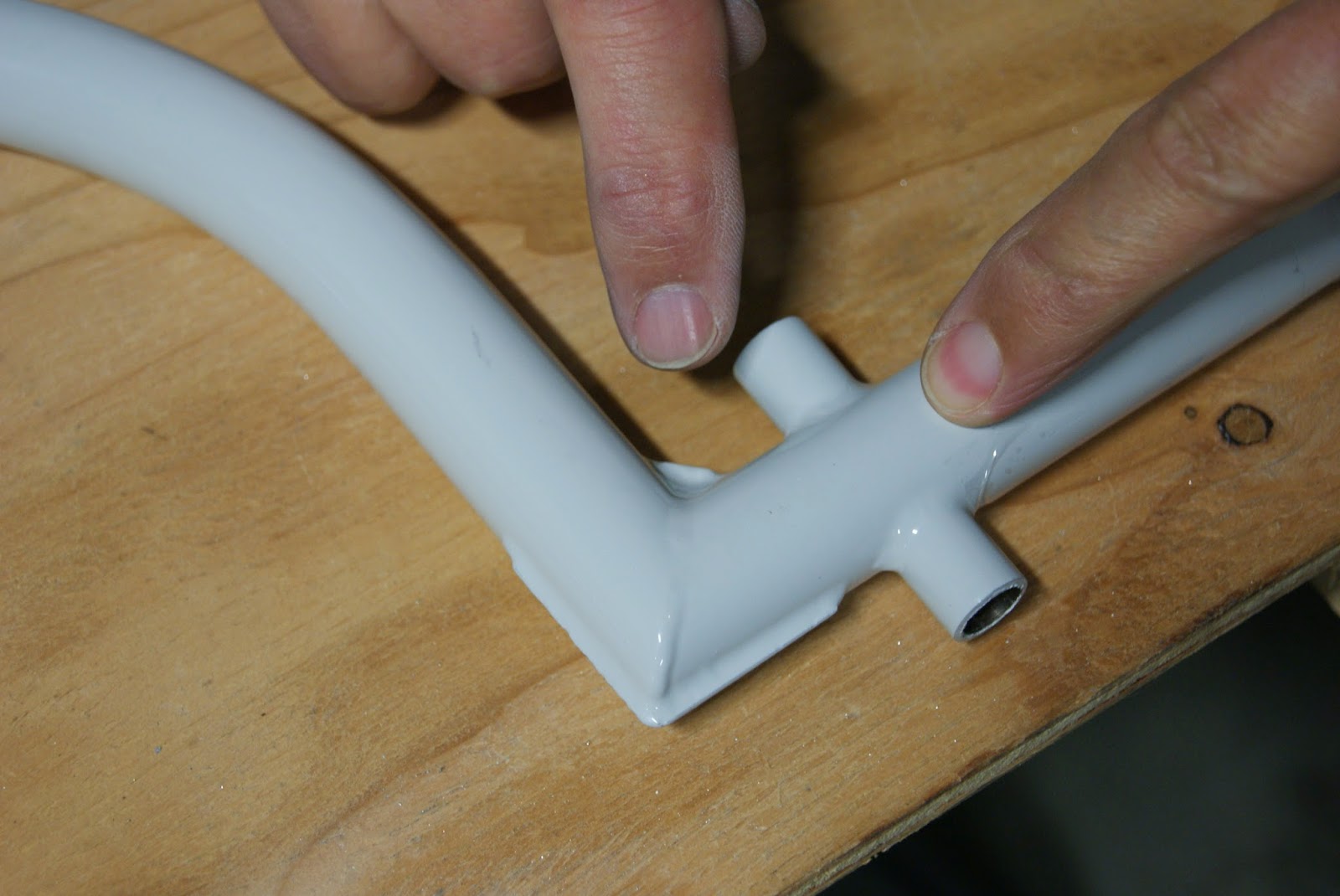 Close-up of the RV-12’s W-1212 control stick … both the weldments being pointed to dissect the tubing … thus creating two chambers inside the control stick at each weldment location which the Tosten CS-8 grip wires must be routed through.

The chambers created inside the RV-12 control stick by the internal gusset and tubular pivot point weldment, coupled with the 90 degree bend, creates quite a challenge for installing wires. As mentioned in a previous post, planning ahead, the DOG Aviation procurement department asked Kevin at Tosten to create two custom CS-8 soft touch grips for the DOG Aviation RV-12. Both grips are provisioned with much longer wires … 3 1/2 foot long (and frankly feel that is still six inches too short but will work nonetheless) and Kevin grouped the wires into two bundles of 5 wires each. One bundle contains the four way hat switch wires, the other is for the remaining switches on the grip. A special request was made of Kevin to also include a 6' + piece of wire sleeve … which Kevin kindly provided as well.

First, having access to Mike’s fiber optic camera, thought it prudent to have a look inside the control stick for weld goobers and sharp burrs. The camera showed no evidence of anything that would impede pulling wires through the stick other than the total lack of room at the tubular weldment. Thanks Mike.

The multi-step process began by feeding in a thin waxed cord from the bottom of the W-1212 control stick to the 90 degree bend … (making quite sure it did not cross chambers). Then a vacuum cleaner was used to suck the cord the rest of the way through the control stick. The waxed cord (purchased from an arts and crafts shop) is a smaller diameter version of the old style cable lashing waxed cord used before wire ties. The waxed cord was tied off taut with electrical tape to reduce the likelihood of the second cord becoming entangled with it. The process was repeated for passing another waxed cord through the remaining chambers on the opposite side of the control stick.

My apologies for the poor quality of most of the following photos ... forgot to bring the good camera home from the hangar. 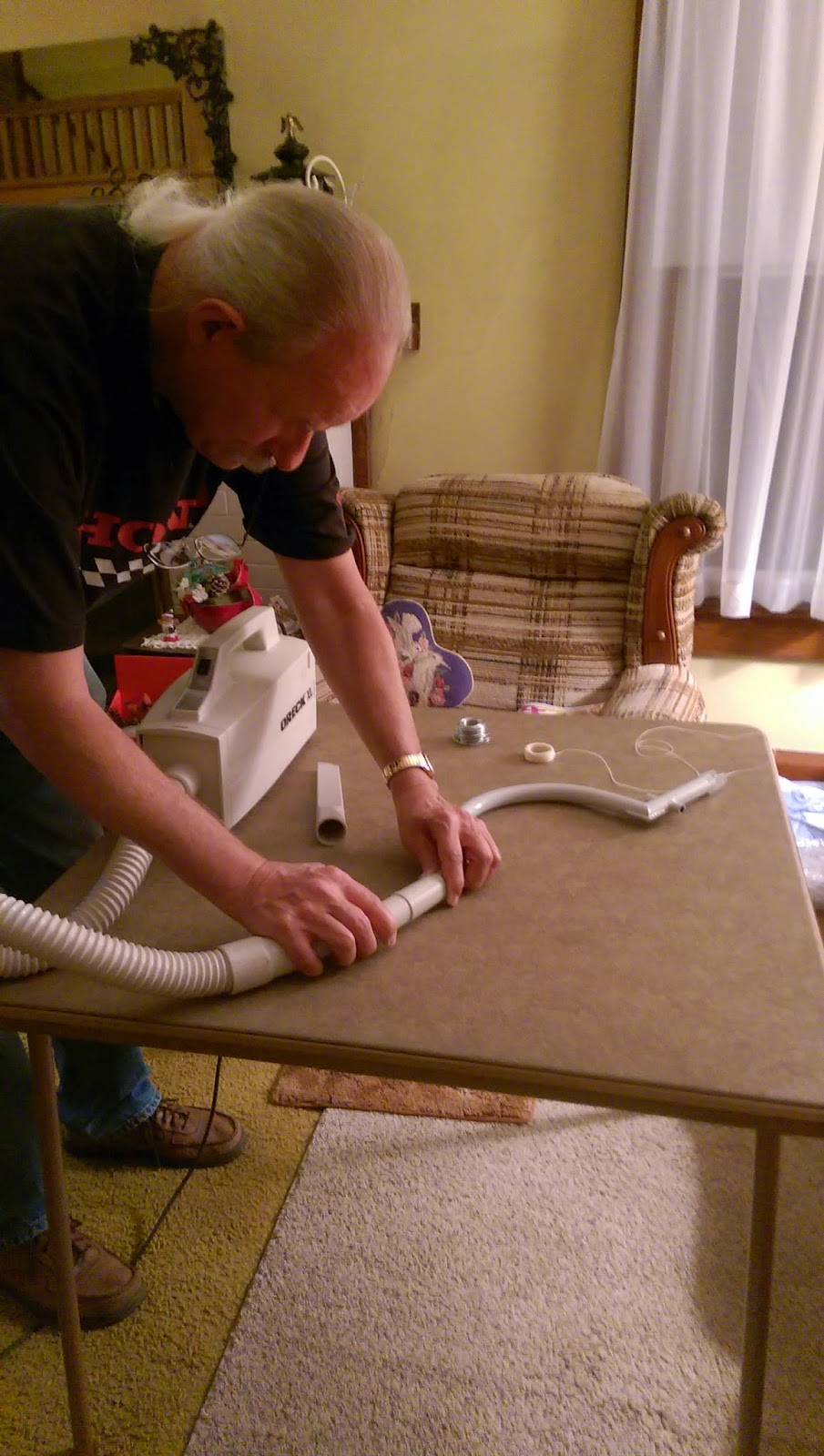 Using a portable vacuum cleaner to suck the waxed cord through the W-1212 control stick. 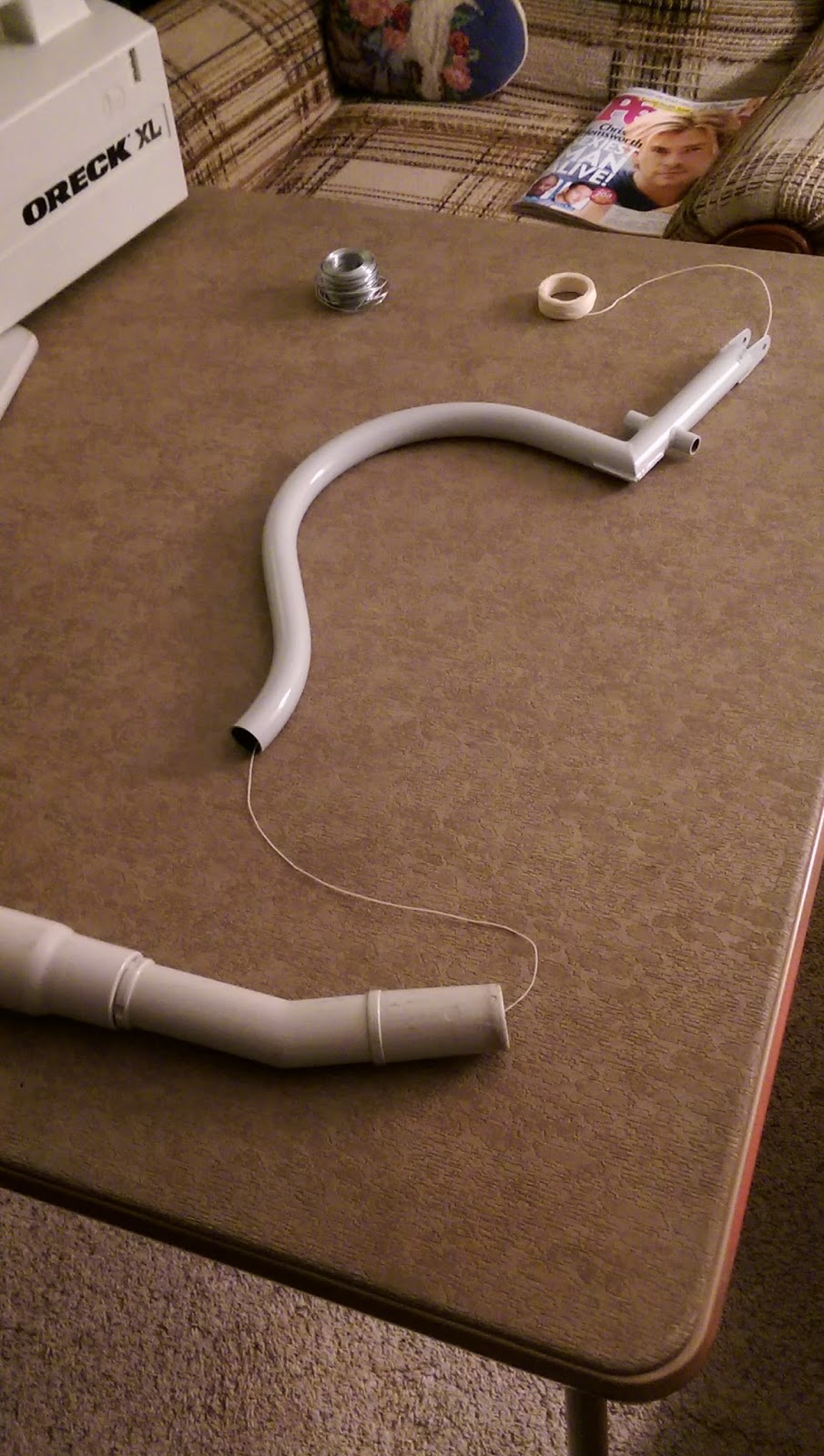 Waxed cord after being pulled through chambers inside the W-1212 control stick .. one down one to go.

Next the waxed cords were tied onto the ends of the extra wire sleeve I requested Kevin at Tosten send me. The ends of the wire sleeves were pulled into the W-1212 control stick from the bottom forming a U. (Felt it was easier to leave the sleeve as one long 6 foot + piece rather than cutting it up). 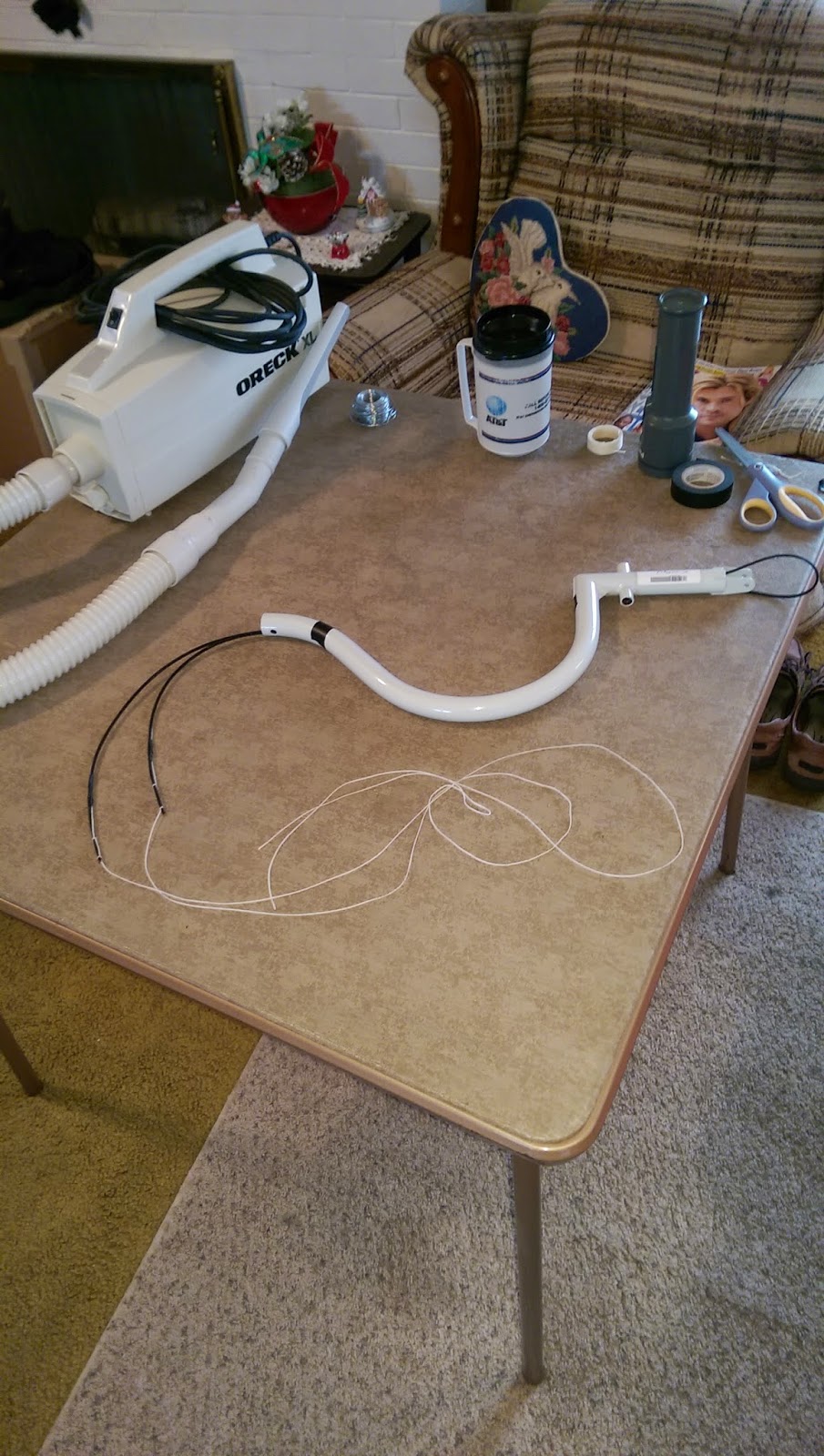 The ends of the long wire sleeve successfully pulled up through the W-1212 control stick using the waxed cords.

Unfortunately, the heat shrink that Kevin placed over the end of each bundle of five wires to dress out the wire sleeve seemingly make the bundle too thick to pass through the close quarters created by the tubular thru weldment … so the heat shrink was removed and replaced with a VERY TIGHT single wrap of electrical tape … you need to keep it as thin as possible here. This also aids the bundle of five wires with the wire sleve covering to easily slide inside the extra wire sleeve being used as a sort of combination “Chinese finger”/pull rope without fraying or bunching up while being inserted into the second wire sleeve. The wire bundles were inserted about 5 or 6 inches into the “Chinese finger”/pull rope. Of note: After removing the heat shrink on the end of each wire bundle the wires were worked as flat as possible with my fingers and then the existing wire sleeve covering the wire bundle was pulled down as tight as possible over the wires then secured with a very tight wrap of electrical tape. 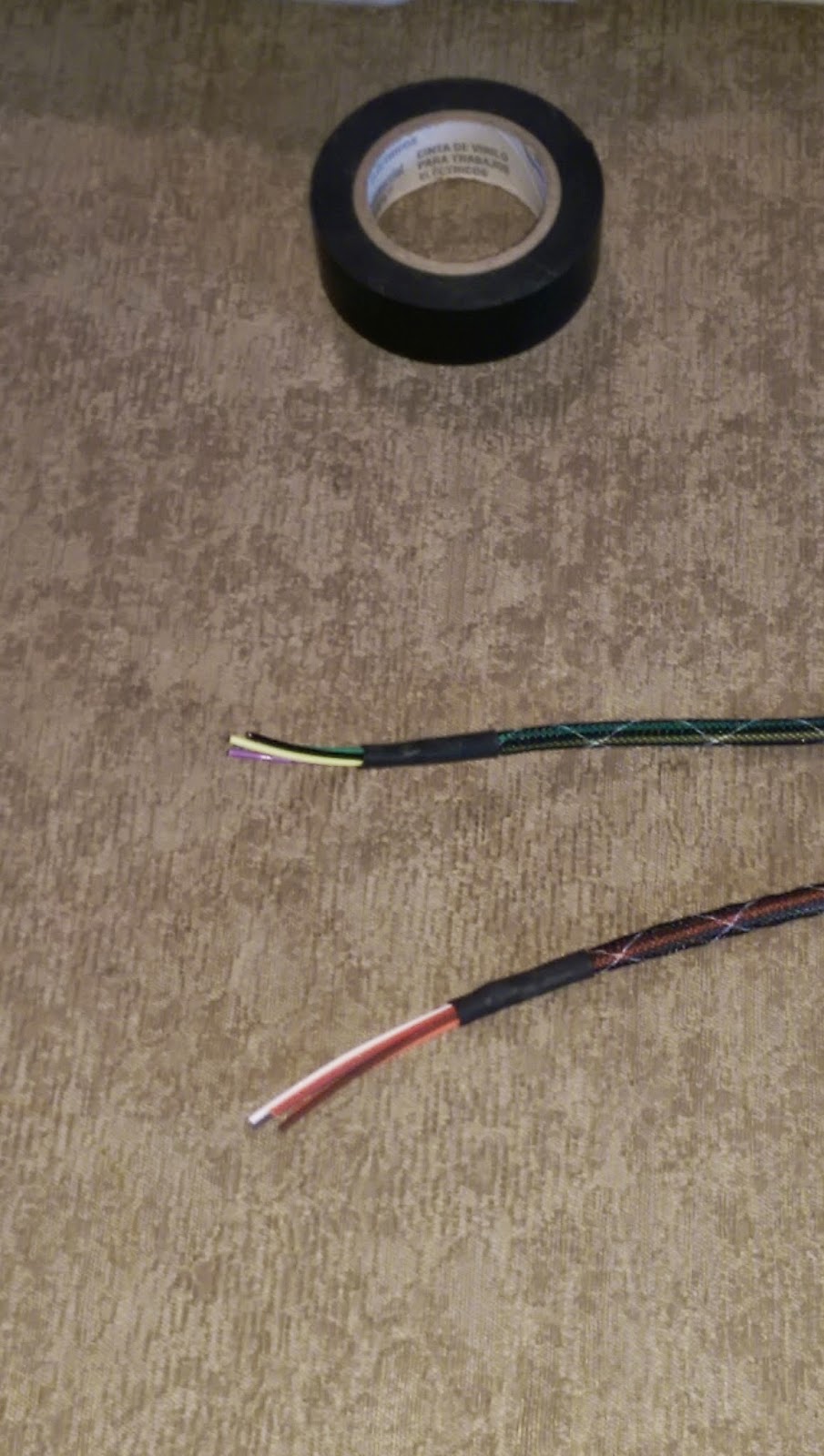 The heat shrink seen here on the ends of the two wire bundles needs to be removed and temporarily replaced with a very tight wrap of electrical tape after the length of the wire bundles are worked as tight and flat as possible with the fingers and the wire sleeve pulled down as tight as possible.

To aid in pushing the wires into the control stick later, the Tosten provided bushing was slid up the wires and onto the shaft coming out of the CS-8 grip and the distance from the stick bushing to the gusset at the 90 degree bend was measured. The wires were then wrapped with electrical tape from the grip to just about an inch or so shy of where the internal gusset is welded inside the stick (this is where the wire bundles need to split into separate chambers then immediately make the 90 degree bend). 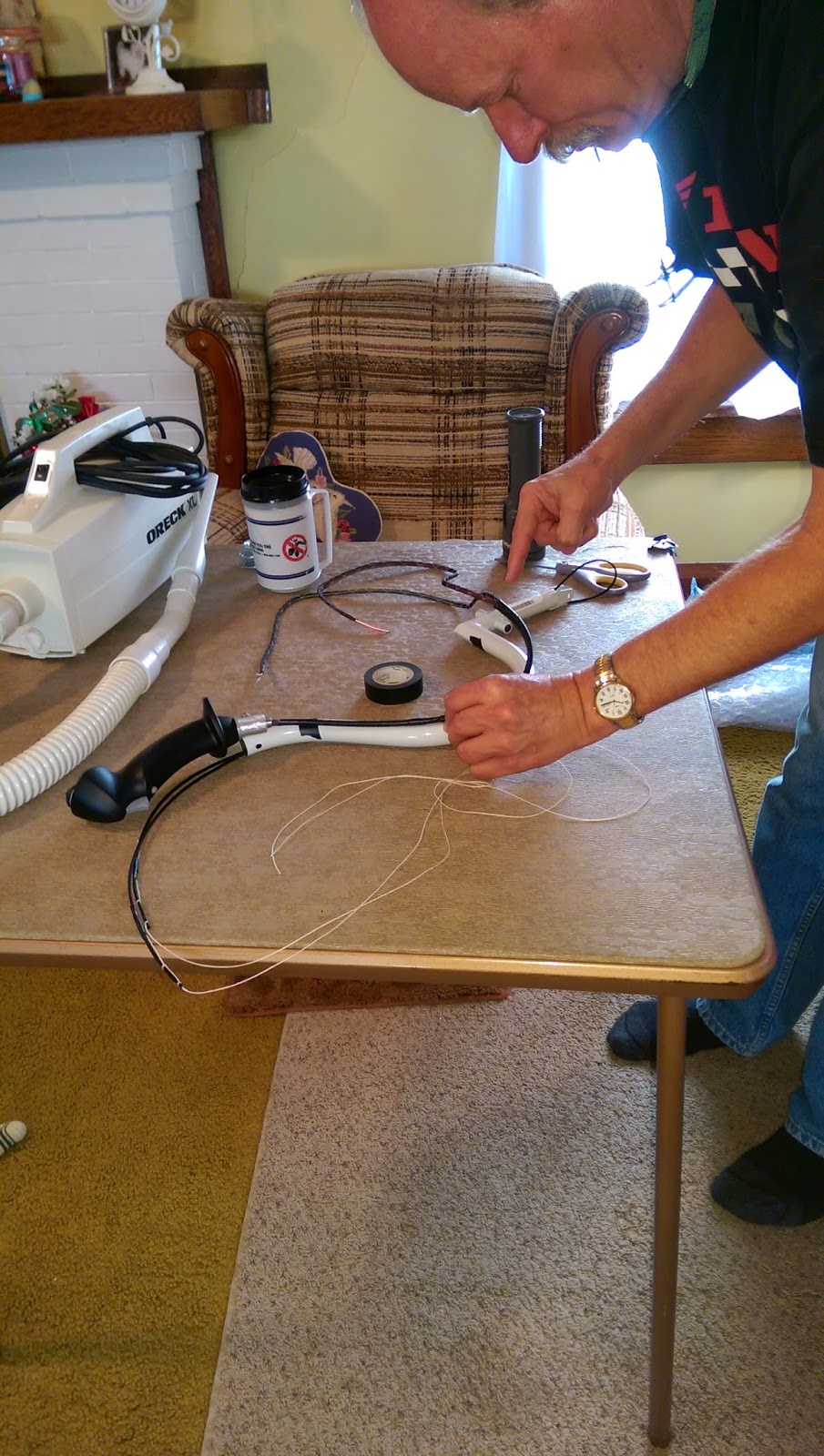 The Tosten provided bushing was slid up the wires onto the shaft of the CS-8 grip and the assembly was placed over the W-1212 control stick so measurements could be made from the point the wires come out of the grip to the internal gusset my finger is pointing to. The wires between these two points were wrapped in electrical tape to stiffen the wires a little so they can be pushed into the tubing easier. 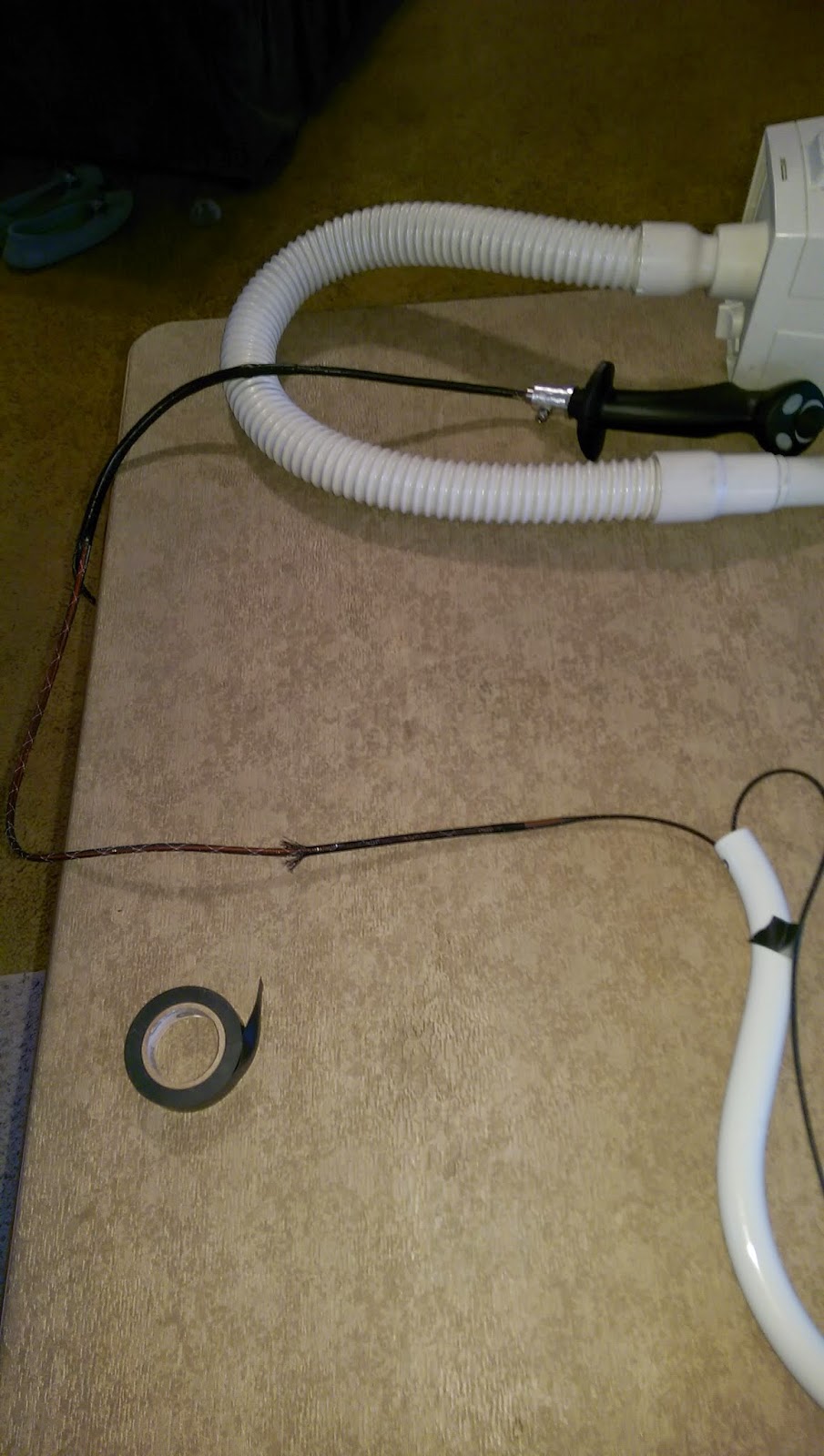 The “Chinese finger”/pull rope sleeve slid over the bundle of five wires for about 5 inches or so and now ready to have the end wrapped with a VERY TIGHT thin wrap of electrical tape.

Next, while feeding the bundle of five wires into the top of the W-1212 control stick, the additional wire sleeve Kevin at Tosten provided was used as a sort of “Chinese finger”/pull rope to guide the wires through the inner chambers of the W-1212 control stick and out through the bottom. I stopped pulling as first bundle of wires were even with the bottom of the control stick. This should occur prior to the outer piece of electrical tape reaching the tight spot. 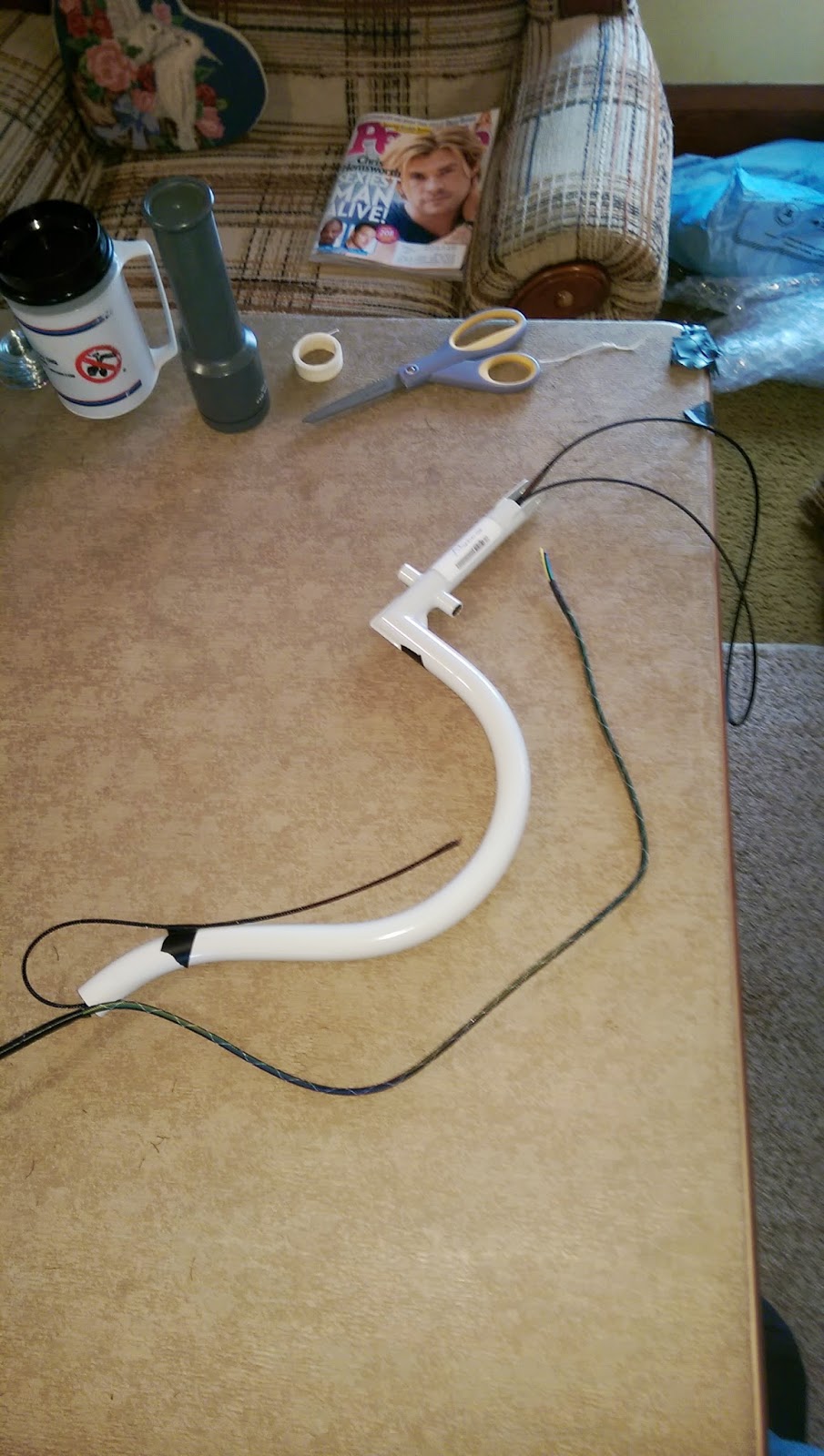 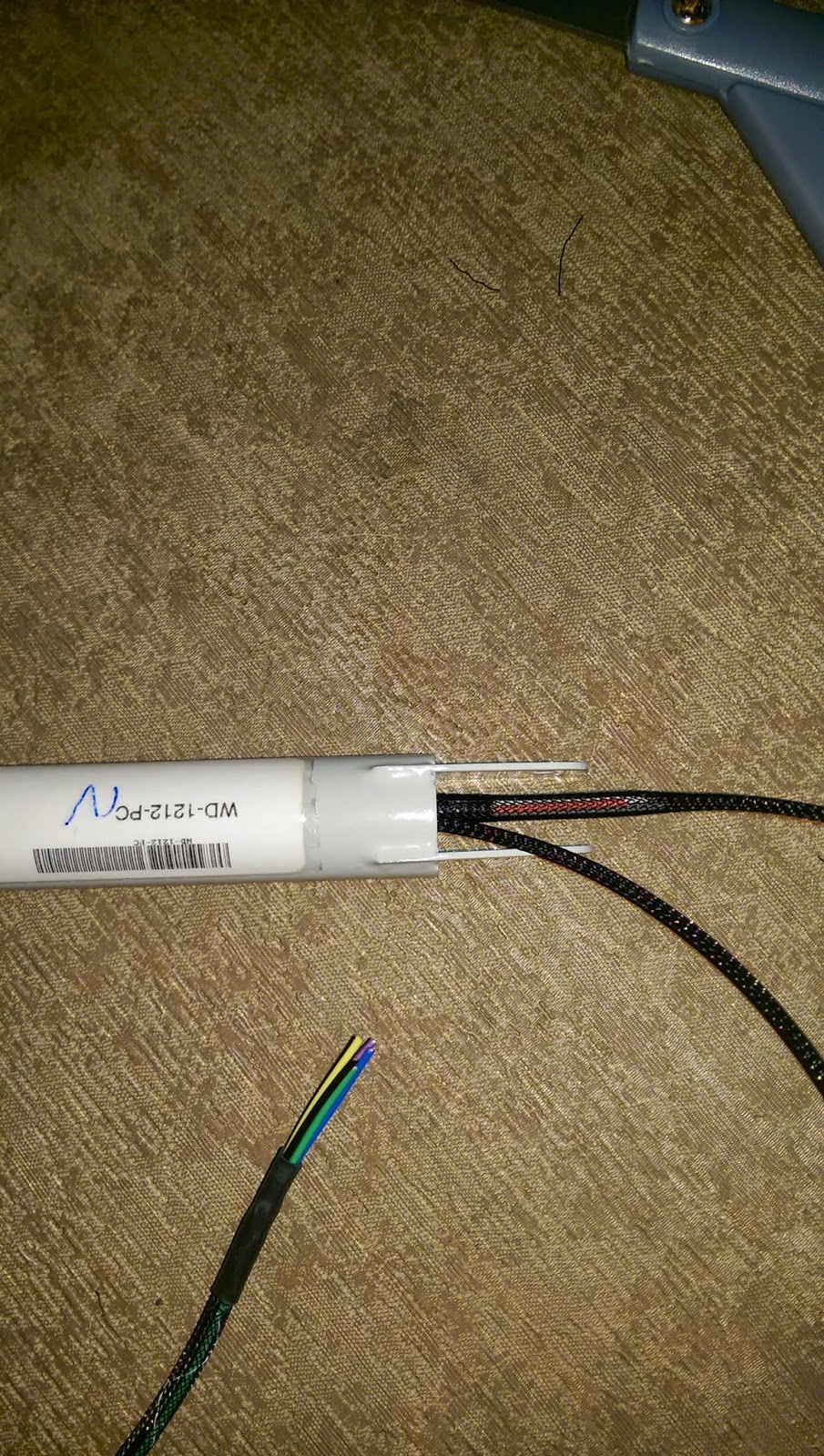 Close-up of where the wires were initially pulled to before moving on to the second bundle of wires. 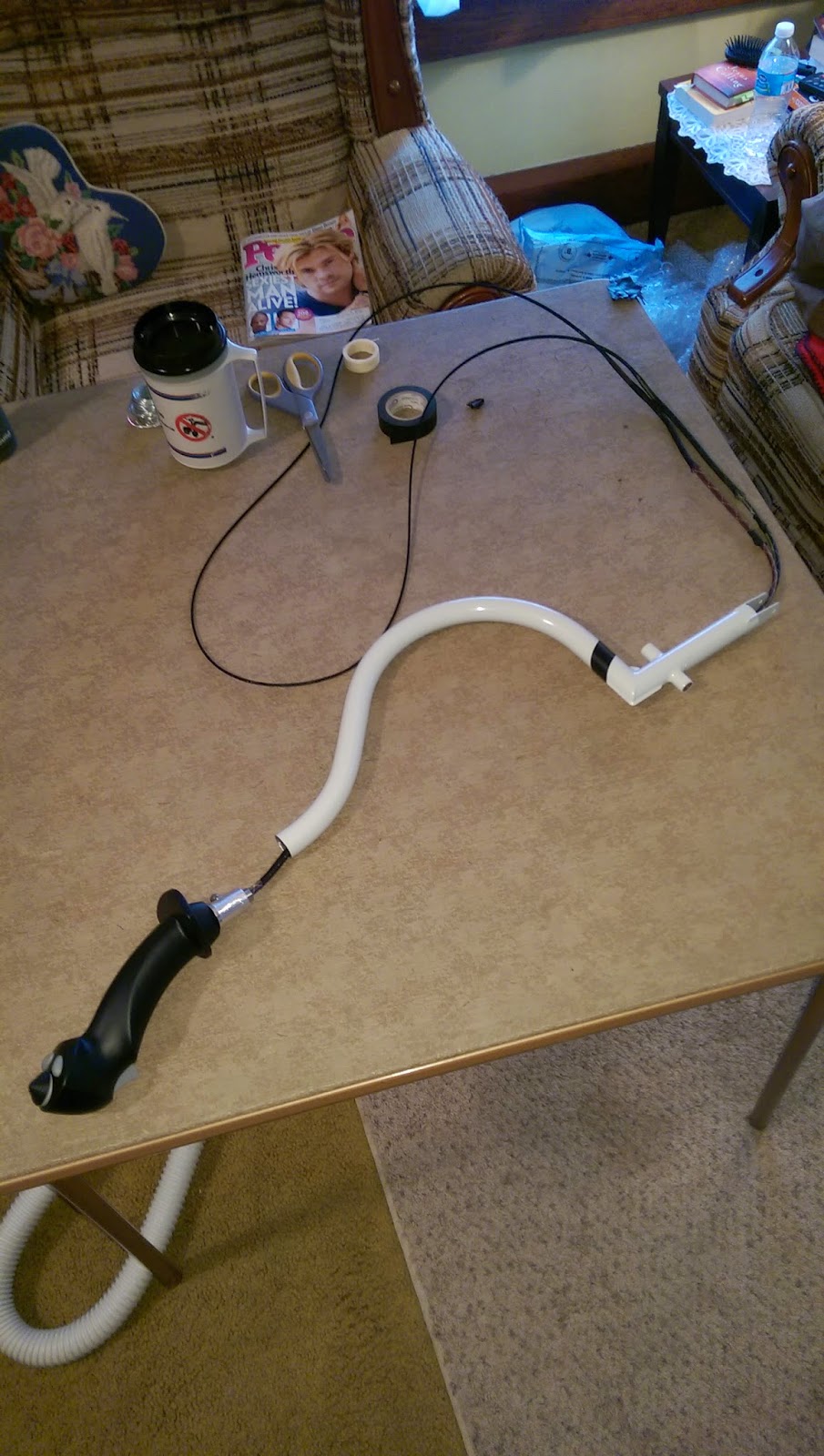 The wires for the Tosten CS-8 grips almost completely pulled into place through the W-1212 control stick. 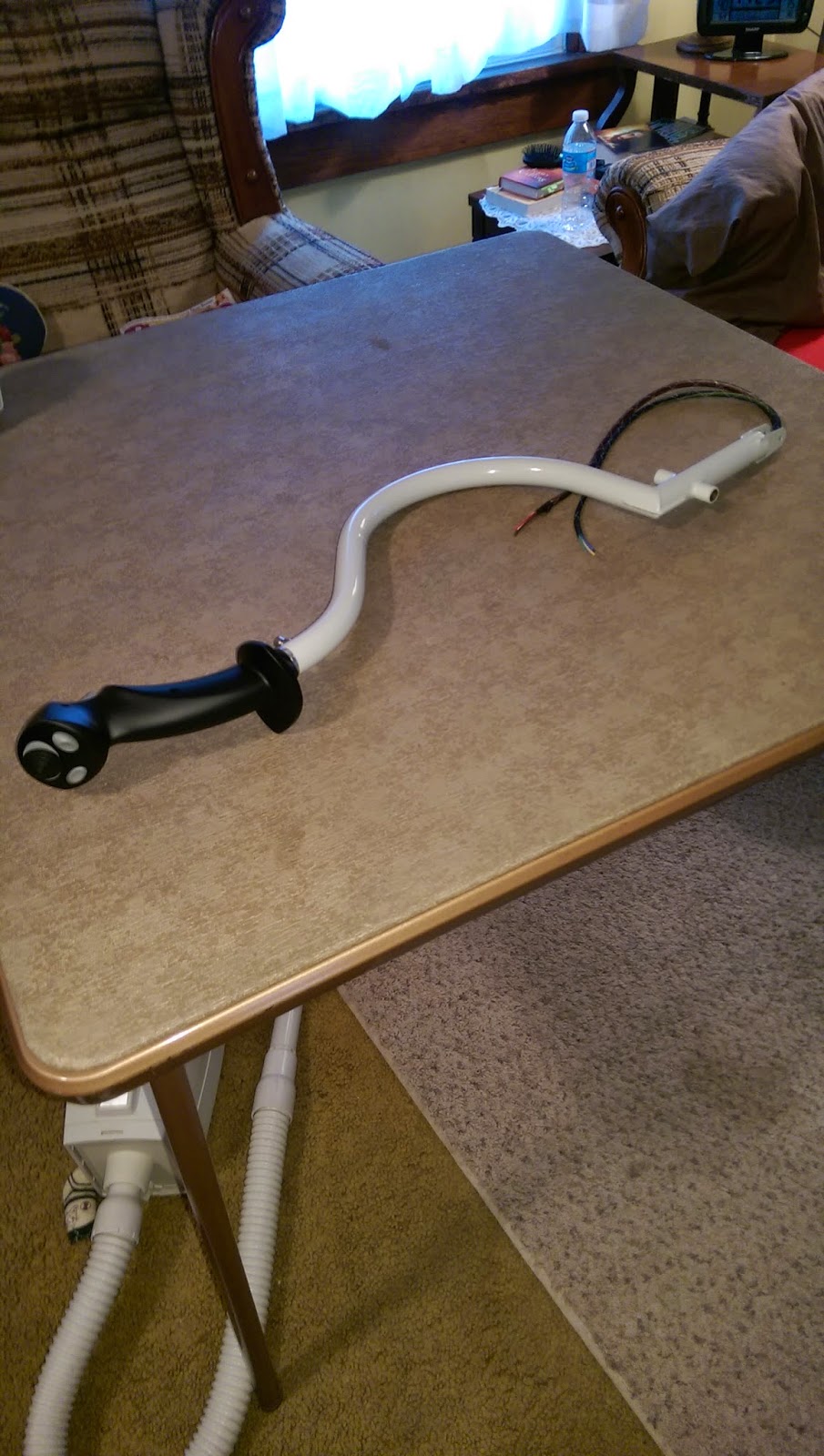 Gee, this was just so much fun … let’s do it all over again for the second W-1212 control stick! 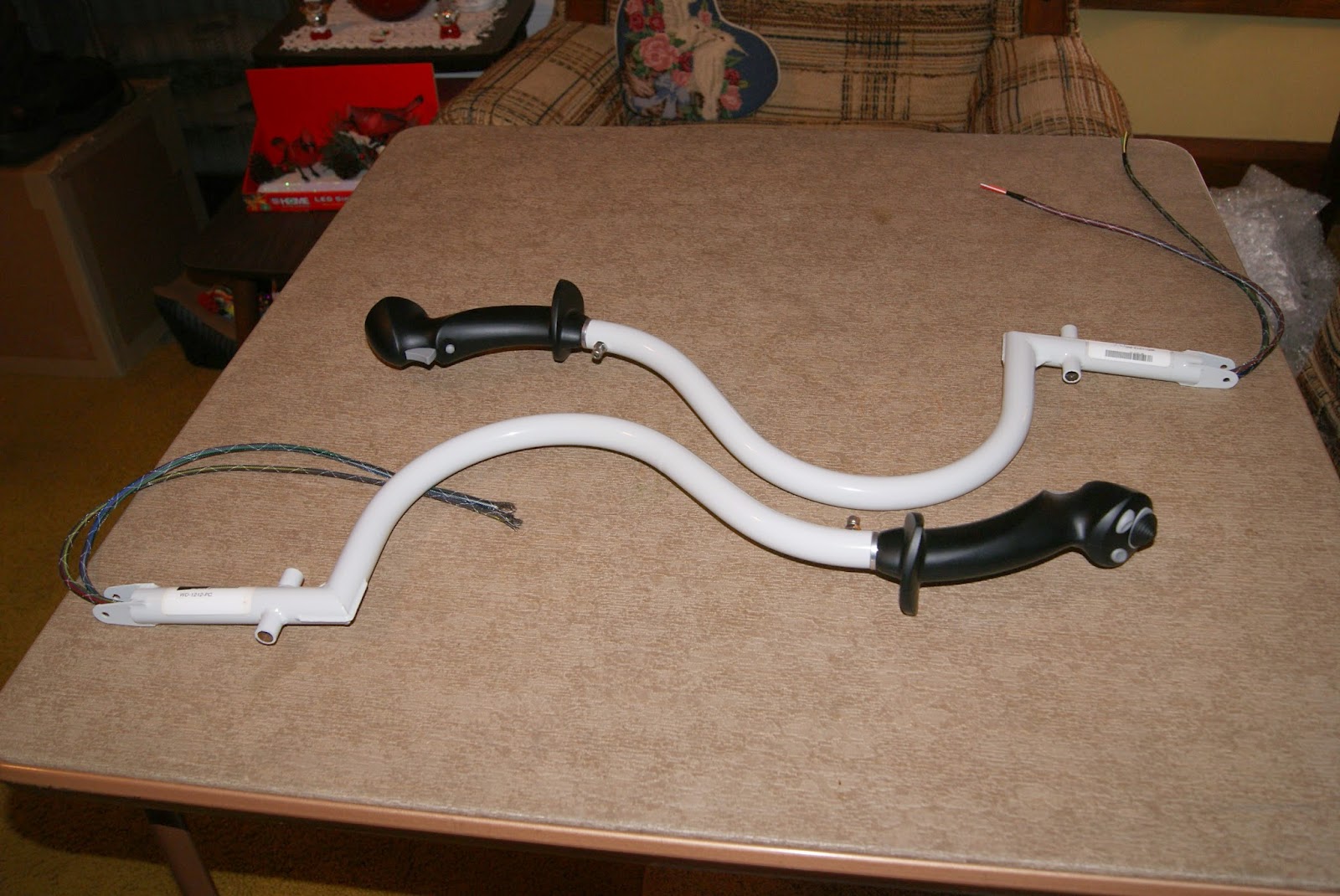 Completed instillation of Tosten CS-8 soft touch grips on both of the RV-12’s W-1212 control sticks.

The Tosten CS-8 soft grips are coated with the same soft coating used on some cell phones and other hand held electronic devices. The coating provides a nice feel to an already very hand friendly and truly comfortable grip.

Thanks again to Kevin at Tosten for the willingness to modify his CS-8 soft touch grips for the DOG Aviation RV-12 and also for providing the extra wire sleeve which proved to be instrumental getting all 10 wires routed through the RV-12’s control stick. I’ll say it again Kevin provides wonderful customer service!