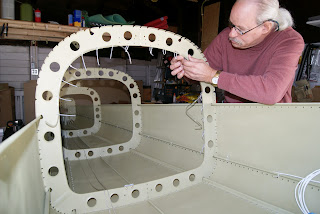 Routing the left side static air line through the wire ties on the F-1208 frame. 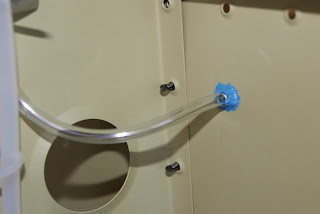 The “T” which is centered on the top of the F-1208 frame gets a little strange to put together in that a 15” tube, which will eventually be connected to supply static air to the ADAHRS, is a larger diameter than the T’s connecting tubes. The plans call for cutting a small piece of 1/8” tubing to first slide over the T’s center fitting then the 1/4" tubing is heated with a heat gun to soften it enough to allow it to slip over the 1/8” tube. It appears to be a tight connection but if it leaks, rest assured, it will be slathered with silicone sealant.

The last bit of pluming is comprised of a 1/4" tube which will be the air line from the pitot tube and will terminate at the ADAHRS unit. 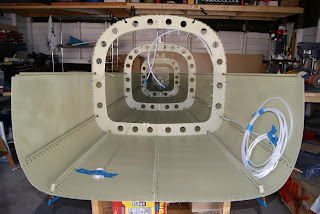 All tail cone wiring and pluming in place.

Note: The wire ties on the left side of the F-1208 fuselage frame and forward are not to be cinched down at this time because when the ADAHRS unit is installed later in the build, a wire will be routed through the wire ties and up to the ADAHRS unit.

Once all the pluming was in place, the left and right upper side skins are added to the tail cone assembly. 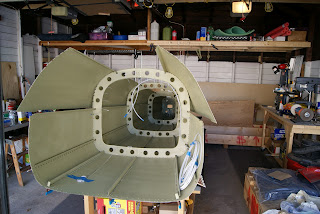 Upper side skins locked into fuselage frames and ready for Clecos.

After the upper side skins were clecoed in place, there are a couple of snap bushing brackets which get installed just forward of the aft bulkhead. Each bracket will hold a grommet that control cables will be routed through. The bushing  brackets need to be match drilled to the J stiffeners of the upper side skins and then riveted onto the J stiffeners. 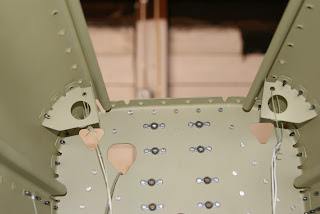 Snap bushing brackets in place and ready for match drilling. 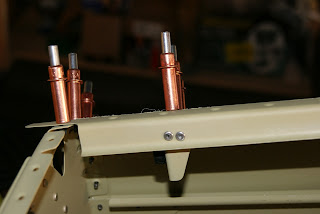 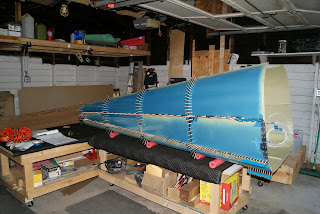 Tail cone skins minus the top skin all ready for riveting.