Riveting continued this sunny morning on the F-1278 top skin’s left side. An hour and a half of riveting later, the RV-12’s tail cone assembly was completed. The completion of the tail cone assembly is a monumental occasion at DOG Aviation in that it marks the completion of the empennage kit. There are a few miscellaneous parts such as the trim servo motor and bracket assembly that need to be attached, but those items are actually part of the final assembly process of all the completed empennage components … which will be done much later because of space constraints at the DOG Aviation assembly facility. 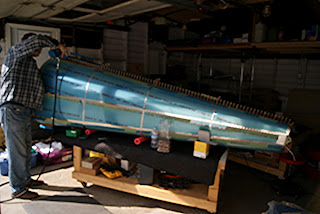 Beginning the riveting of the top F-1278 skin’s left side onto the tail cone assembly. 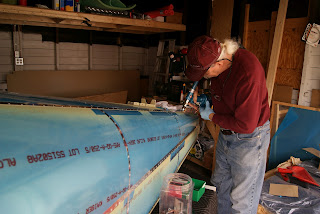 The end is near … just a few more rivets to set before the tail cone is completed.

For those RV-12 builders that are inclined to use flush rivets as I have will want to take note: … wait until the last moment to dimple your top skin. Way back in the tail cone assembly, one of the very first items in the instructions is to break the edges on the skins. There is mention of breaking the edge of the top skin even more between the F-1210 far aft fuselage frame and the aft bulkhead. I gave that area some extra break as suggested in the plans, however, it was still a little shy of what would have been ideal for the ultimate tight fit. Mine pulled in fairly tight during riveting and looks good. However, I can slide a piece of notebook paper under the very outside edge of the skin which I can not do anywhere else. So hindsight being 20/20 I would have test the break fit first and once happy with the fit, proceed to dimple the top skin. Because in that part of the tail cone, the top skin takes on more of a dome shape that narrows the further aft you get …  which explains why more edge break is necessary in that section. Unfortunately, once the skins are dimpled, the Cleaveland edge tool can no longer be run down the edge of the skin to add more break to the skin. 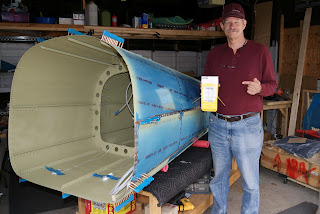 The finishing of the tail cone assembly was also highlighted by the second empty box of 1,000 rivets … the RV-12’s rivet count is now approximately 2,000 flush rivets and counting.
Posted by John at 6:07 PM