I had been worrying about drilling these holes for days but everything lines up fairly well amazingly … However, it is not perfect ... the lower skin pulls in slightly. My bigger fear was it would bulge, so that is good news.  Doubt anybody would notice because the skin distortion is very slight but of course I know … so I may just rivet the top rivets first and if I’m in the mood for making a thin shim for the bottom, I’ll have that option. I’m making it sound bad and it really is just fine the way it is now … it just could be a little better fit. 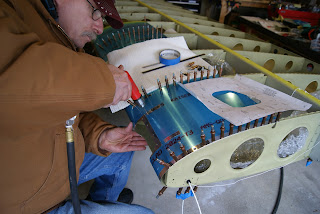 Using a small pilot drill on the six landing light rib rivet holes
needed to be drilled into the top of the W-1203-L wing skin. 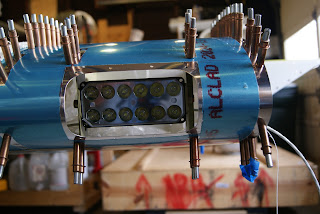 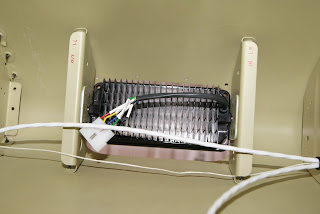 Once the fit of the landing light assembly was verified, decided this would be a good time to finish the landing light electrical connector. The landing light’s shielded cable, which was previously routed through the wing, was stripped back about 3 or 4 inches keeping the shielding intact. The same process was used here as at the wing root electrical connector where by the conductors were pulled out through the braided shield at the point where the outer insulation was removed. The shield was then pulled back and covered with heat shrink tubing and a printed heat shrink label was used to cover the transition point at the end of the cable. One important step is not to forget to run the cable (or wires as the case may be) through the grommet on the inboard landing light rib BEFORE the Molex connector is assembled. I almost got ahead of myself here so that is why I’m mentioning it. 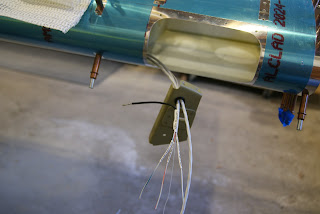 The Tool Aid crimping tool with the smaller dies purchased for .062 Molex pins did a great job. The connector was assembled in a snap. Female Molex pins are attached to the wires coming from the electrical connector at the wing root and then the pins were slipped into the Molex connector. The Molex connector for the additional left wing landing light was wired the following way:
Pin 1 Ground
Pin 2 not used (master output)
Pin 3 Slave input (signal from right light’s master output for wig wag sync)
Pin 4 Wig wag power
Pin 5 Landing light power 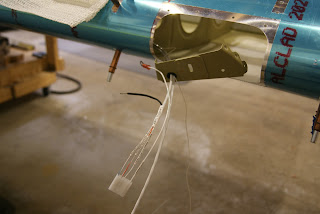 The finished left wing landing light Molex electrical connector.
Tomorrow the plan is to use an ohm meter to verify continuity of all the wiring. Feel it is better to test now, rather than after the wing is closed just incase there is an issue with one of the connections. As for the landing light lens, unfortunately may have to drill that now instead of waiting until summer. The lens supplied for the light fits the RV-12 and also the RV-10. The lens is way longer than necessary (assuming to accommodate the RV-10) so it needs to be trimmed quite a bit. It looks like that process will be much easier if it takes place prior to riveting the landing light’s ribs in place. Sunday is forecasted to be close to 60 degrees, so will use the heaters to get things up to 70 in the shop so the Plexiglass lens can hopefully be drilled without cracking using the special Plexiglass drill bits.
Posted by John at 8:28 PM