The warmer temperatures I was awaiting for to allow painting some of the firewall components were also accompanied by very gusty winds … making painting parts from a rattle can a foolhardy endeavor. The warmth was only for one day so did not ProSeal the upper firewall either. Nicer 50 - 60 degree weather is promised for early next week … so meanwhile decided to move forward and perhaps run some wires throughout the fuselage.

The F-1204Y wire run conduit was checked for length (correct out of the package) and at a midway point in the conduit a 7/16” hole is cut into the plastic tube. Two pull strings are then placed into the conduit from the newly cut center hole to each end and another string is installed that passes through the conduit from end to end. The conduit is then attached onto the center section using four cushion clamps and some hardware. 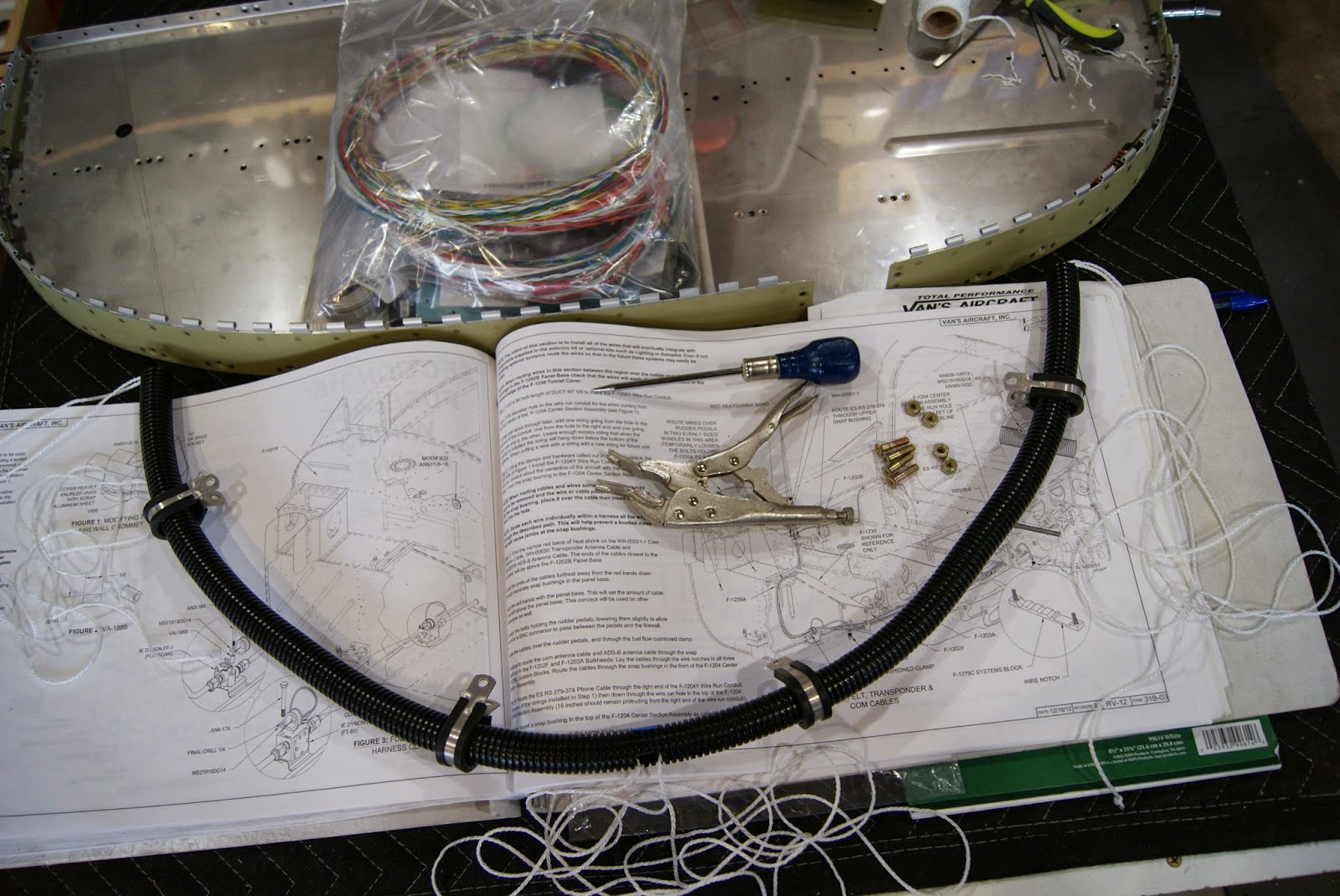 F-1204Y wire conduit with pull strings ready for assembly onto the center channel by way of four cushion clamps.

One of the tools the DOG Aviation procurement department purchased early on, knowing it would come in handy for the finish kit and engine mounting phases of the RV-12 project, is a cushion clamp pliers and awl set. Basically, the pliers (pictured in the accompanying photos) are small vice grips that have long slotted bills welded onto them. The pliers squeeze the cushion clamp tight and an awl is used to center the holes for easy bolt or screw insertion. Once a nut is threaded onto the mounting screw, the pliers are slipped off. They worked quite nicely and no sore fingers with deep dents. 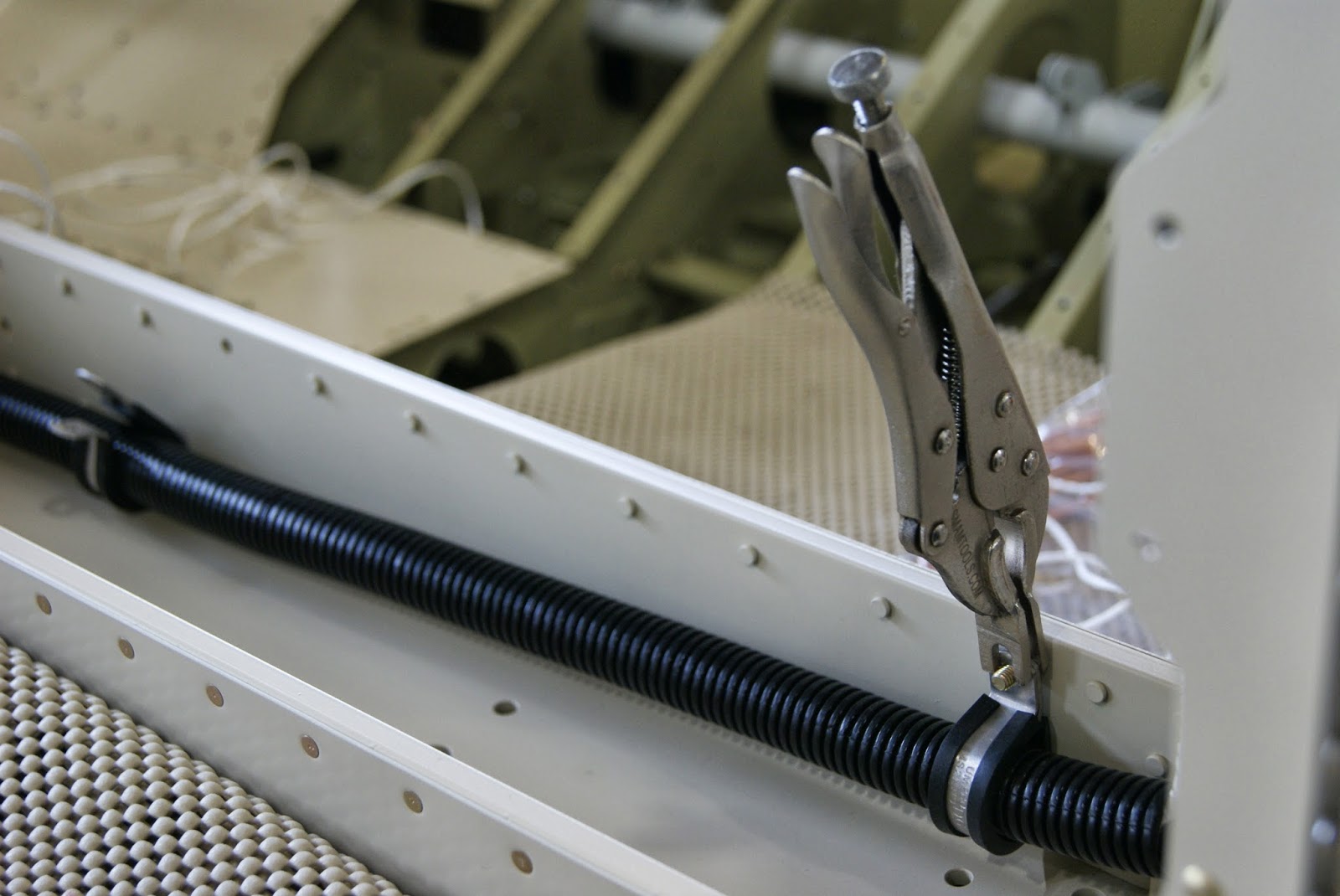 Cushion clamp pliers holding the cushion clamp tightly together so a mounting screw can be easily inserted and a lock nut started without destroying your fingers. 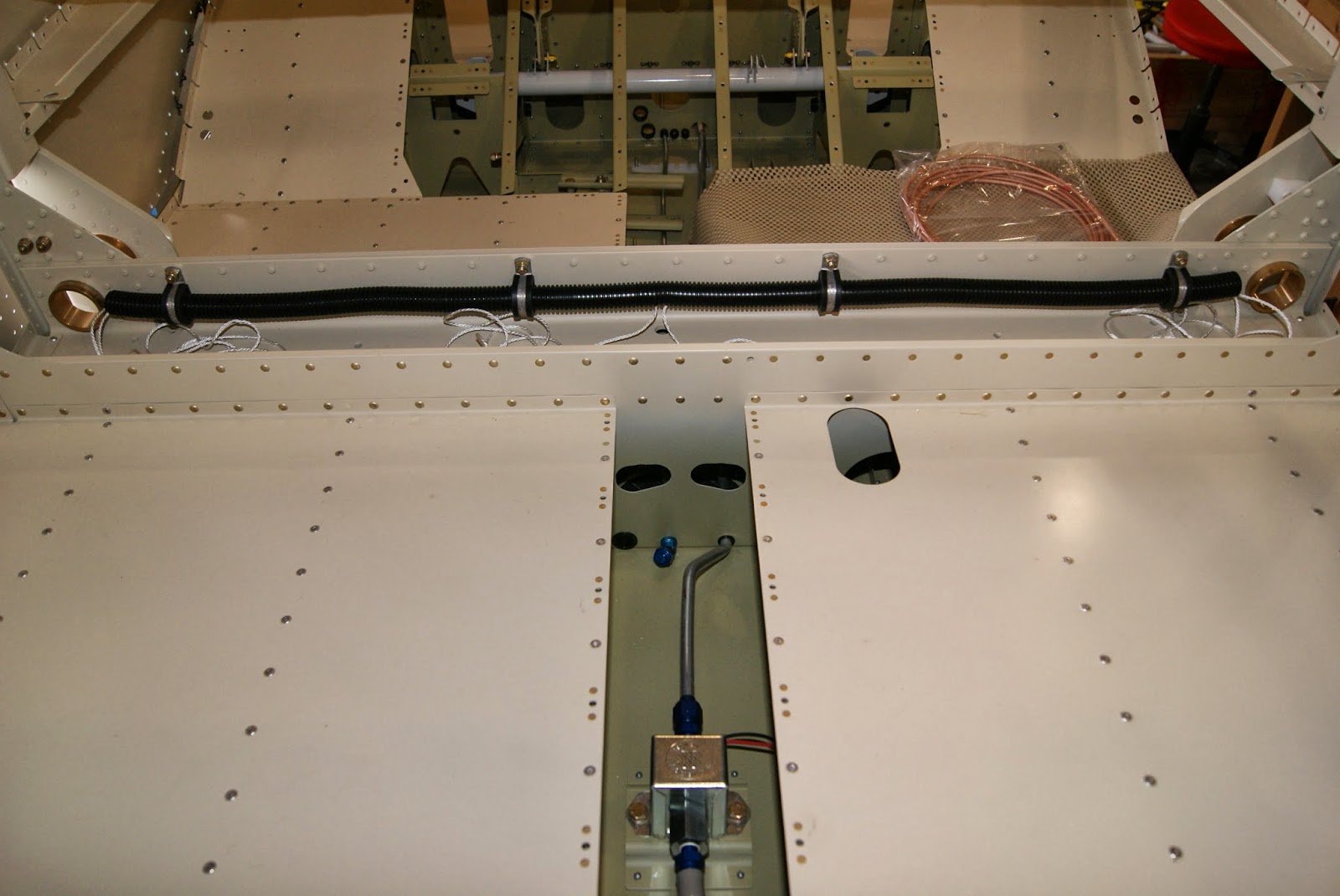 F-1204Y wire run conduit installed on the center channel with the three pull strings in place.

Because the upper firewall is not in place yet, decided to just clamp the F-1202B panel shelf in position onto the longerons and begin running wires to their approximate locations throughout the fuselage. The first task called for is to run the three coax cables for the Radio, Transponder and ADS-B antennas. Sounds easy enough right? … no sooner did I get the cables unpackaged and labeled to begin instillation when it became very apparent there was a problem.  The instructions said to run each coax cable through separate holes with grommets on the F-1202B panel shelf … “Huston we have a problem”.  The F-1202B panel shelf only has two wire run holes … but the drawings clearly show three holes. Photo of F-1202B panel base … the missing ADS-B antenna wire hole should be in the vicinity of the silver connector to the left of the two existing wiring holes shown without grommets.

Quickly figured what the issue was … which definitely is not a fault of Van’s. The problem is the ADS-B option was officially announced by Van’s after my fuselage kit was crated. Apparently, on the newer fuselage kits, a third hole is in the F-1202B panel base because the ADS-B antenna wiring is now supplied with the finish kit … regardless of whether or not the ADS-B option is ordered. The antenna wire is to be run in place so it is there for future use making an upgrade to ADS-B much easier later.

An Email was sent to Van’s requesting the correct measurements for adding the additional hole in the F-1202B panel base. I received the entire ADS-B section 53 instillation PDF file which was promptly taken to a local office supply store and printed onto 17 x 11 sheets to add to the RV-12’s construction manual binder.  Section 53 covers the instillation of ADS-B and on page 2 there are drilling dimensions given for the placement of the third hole in the F-1202B panel base. Basically, the third hole is located inline with the aft most 3/4" wire hole and 1 1/2" from the existing hole’s centerline towards the right side of the aircraft. 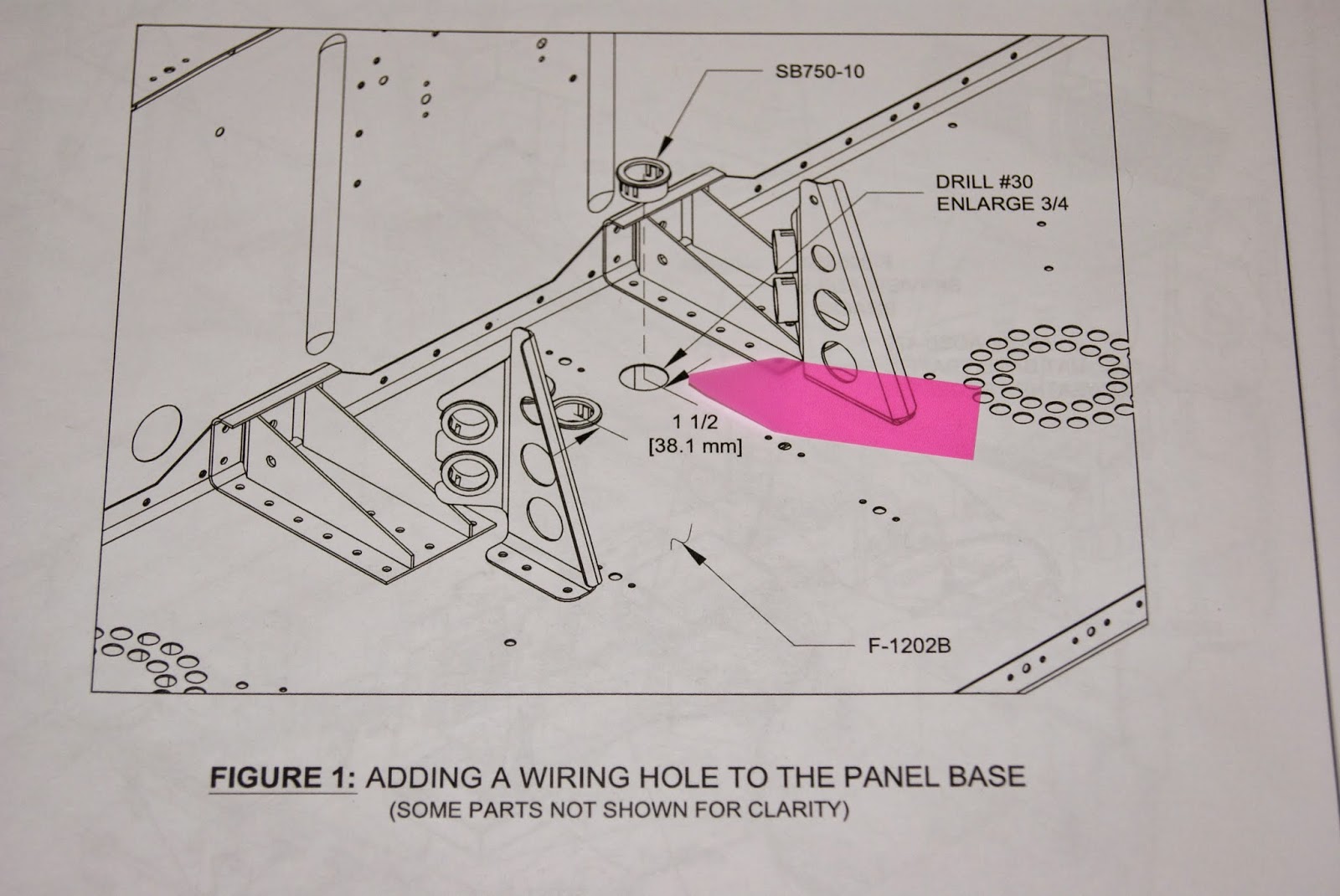 Some builders with older fuselage kits may need to drill the 3/4" ADS-B antenna wire hole at this location as I do. If so, suggest doing it before installing the F-1202B panel base.

Two step drills were used in the drill press to enlarge the hole to the required 3/4" … first a small step drill that enlarged the #30 hole initially drilled into the F-1202B panel base then a larger step drill that went to the final size of 3/4". 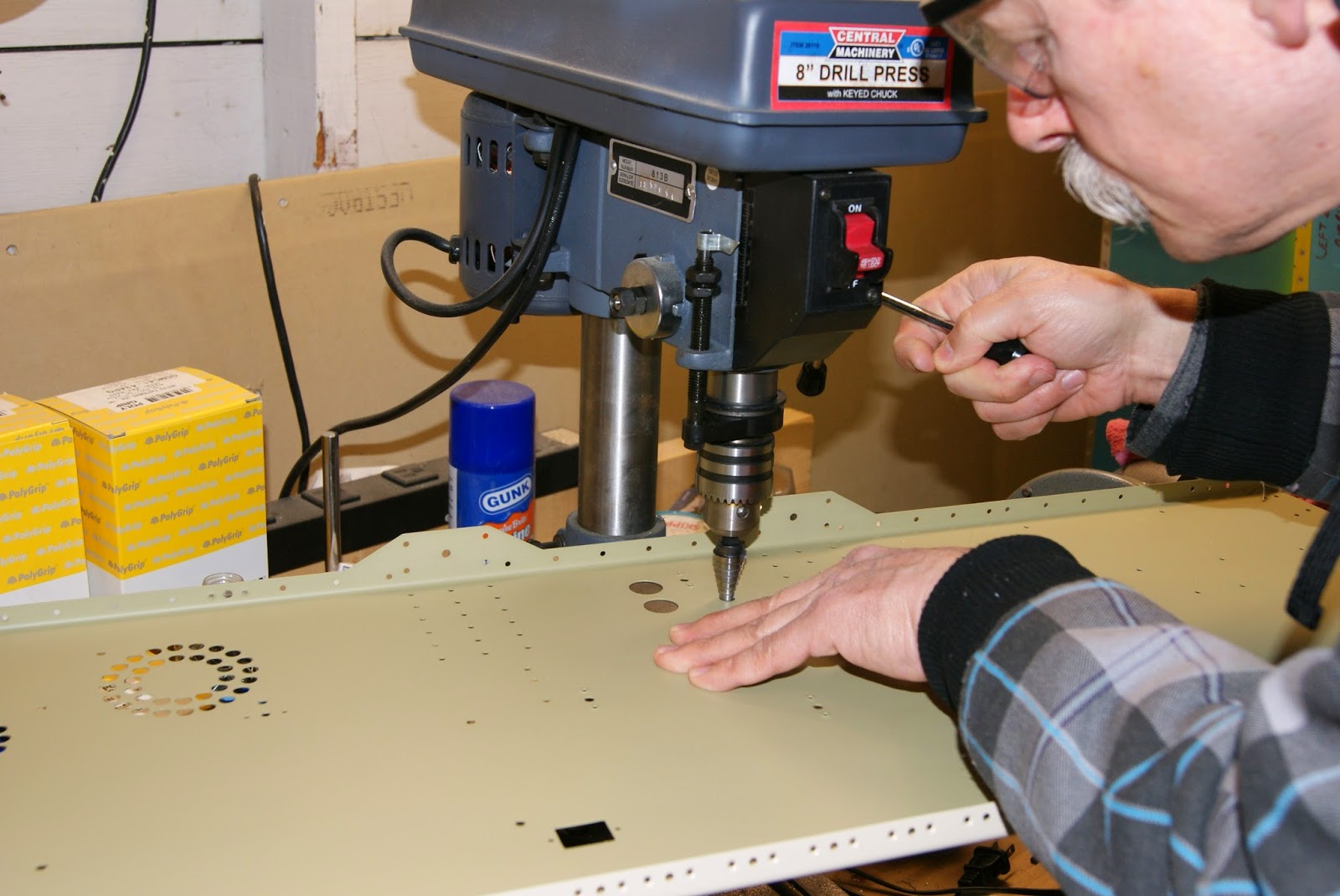 Checking the alignment of the second larger step drill before turning on the drill press and drilling the new hole in the F-1202B panel base to a final size of 3/4". 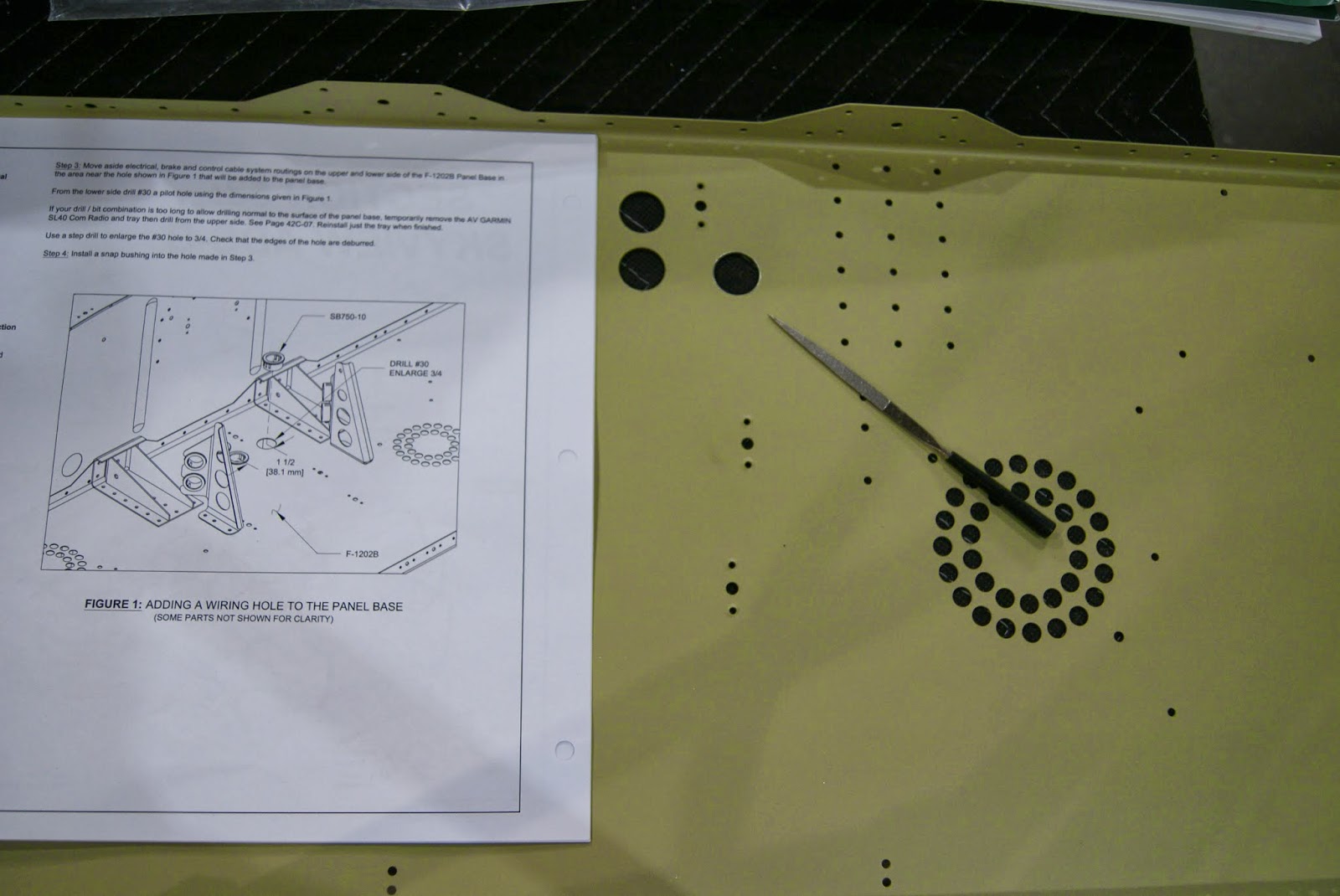 New third hole drilled into the F-1202B panel base deburred and ready for a grommet and the ADS-B antenna a wire.

Initially, while looking at the drawings, thought the F-1204D center channel aft bulkhead would also require an additional hole. But as it turns out, it may or may not … it totally depends on when the ADS-B wiring is installed. If the large BNC connector is the first wire being run through the wire grommet in the F-1204D bulkhead (as in my case) no problems … the rest of the wires can be pulled through that grommet after the ADS-B antenna cable is in place. HOWEVER, if you are adding ADS-B onto a flying aircraft, there is not enough room for the large BNC connector to fit through the grommet which is full of wires so an additional hole will need to be drilled into the bulkhead to accommodate the ADS-B antenna wire. For those of you in that predicament, below is the drawing you will need depicting the additional hole placement in the F-1204D bulkhead for the ADS-B antenna wire. 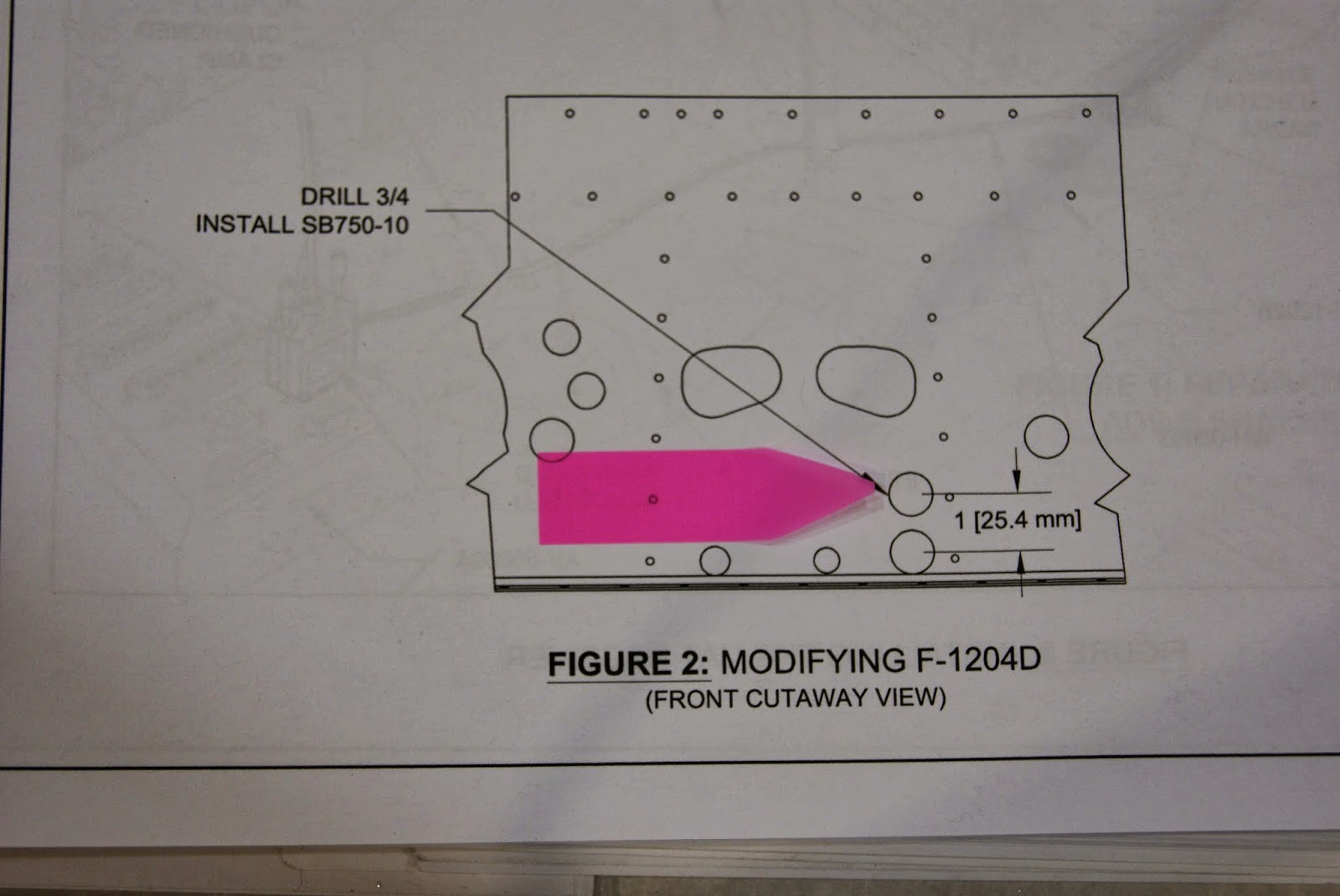 Additional wiring hole placement in the F-1204D bulkhead for those adding the ADS-B antenna wire to a flying aircraft.

Hopefully later today I can get some of the wires run throughout the fuselage without any more bumps in the road.
Posted by John at 9:24 AM