The long overdue opening and unpacking of the RV-12 finishing kit for inventory and parts inspection has begun … only had a little time to work on it yesterday and today so not quite finished. The inventory is mostly completed except for a large bag that contains quite an assortment of small parts and lots of hardware. In general, the parts look to have made the trip across the country in good shape ... although there was one small gouge on the crate but fortunately it was at a location where there was nothing touching the crate at that location. 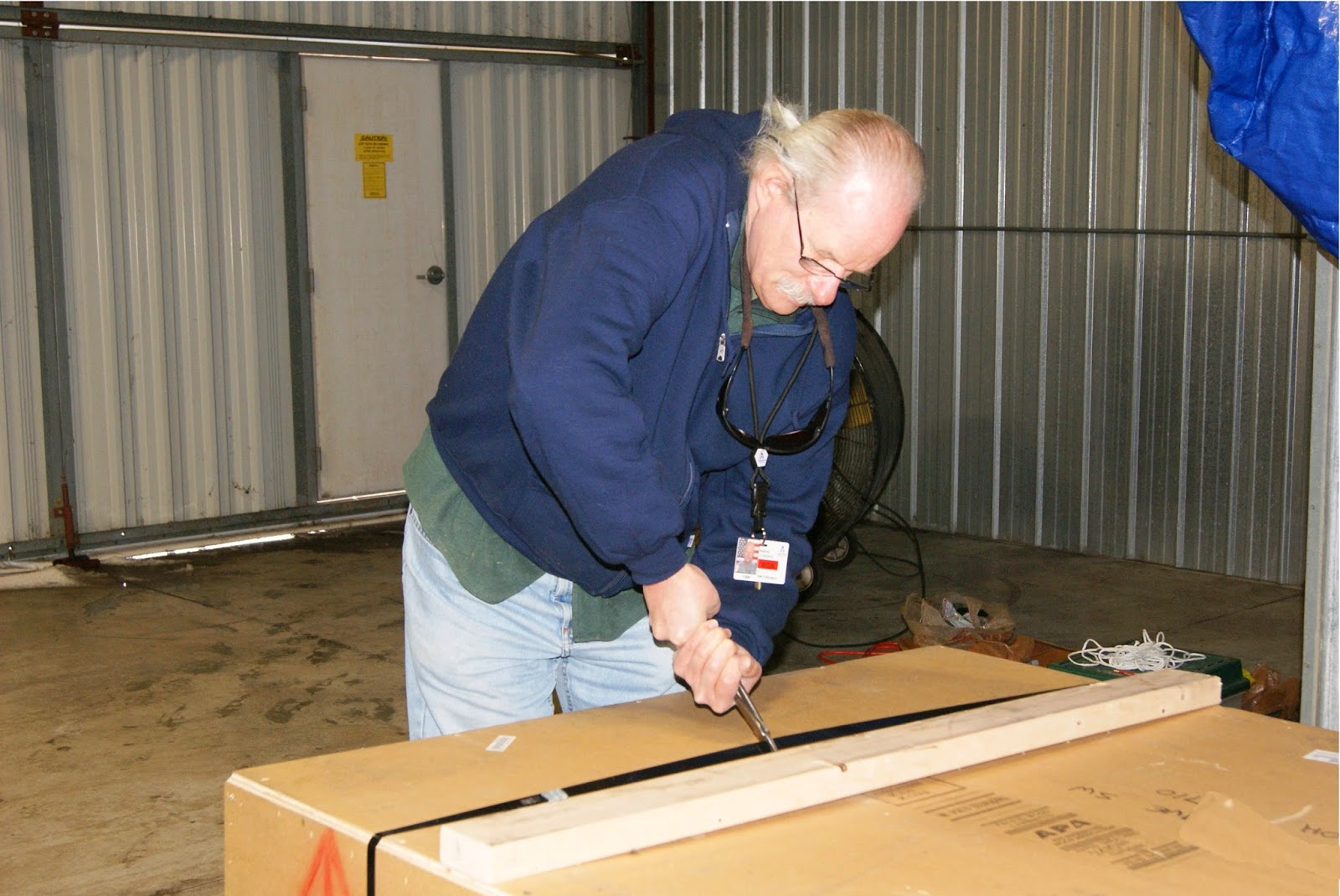 After removing the screws from the finishing kit crate, the banding material was removed from the crate. 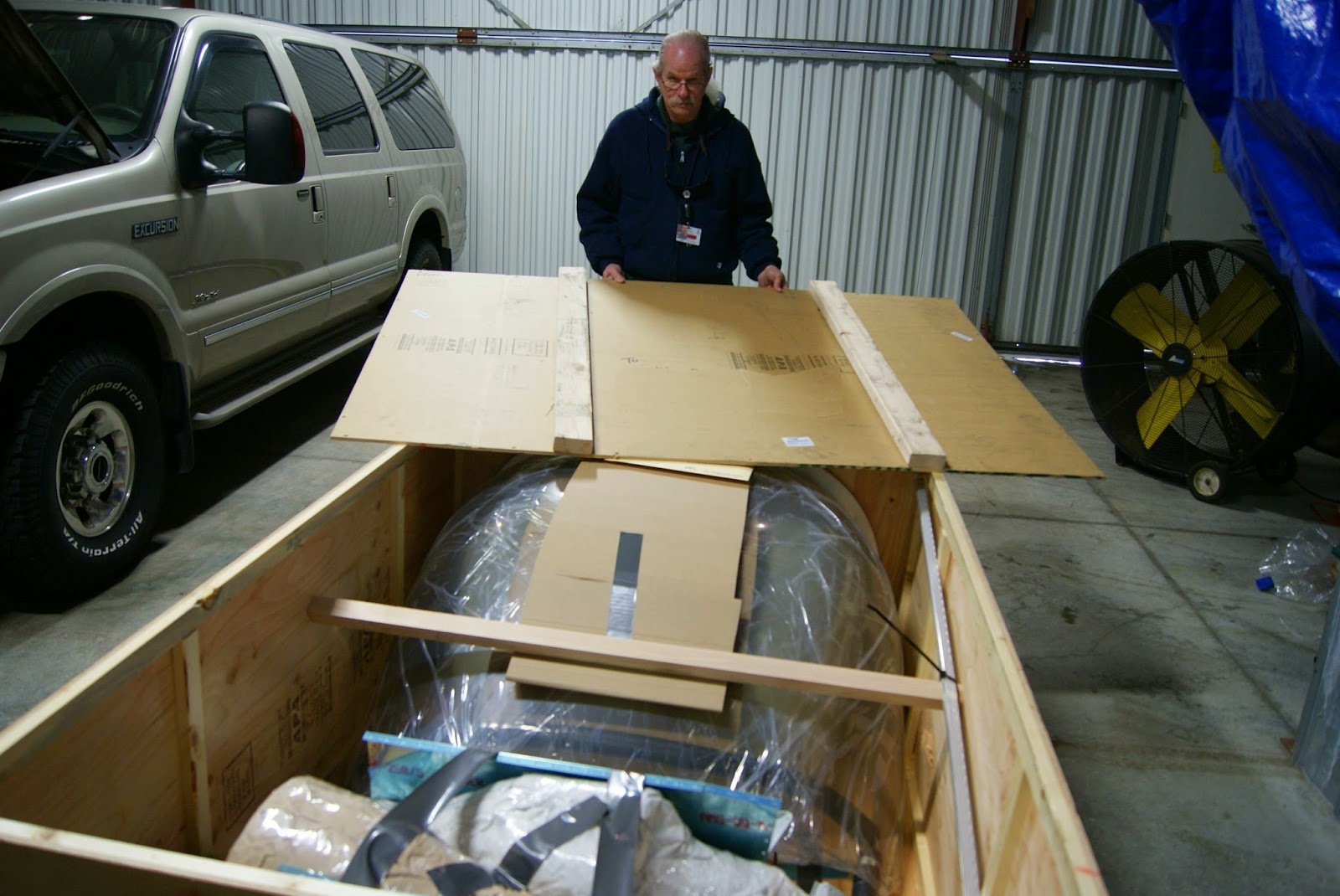 The opening reveled yet another quality packing job done by the minions at Van’s … the crate contained quite a few internal braces and strapping to keep parts in position during transit thus keeping the all important canopy unscathed. 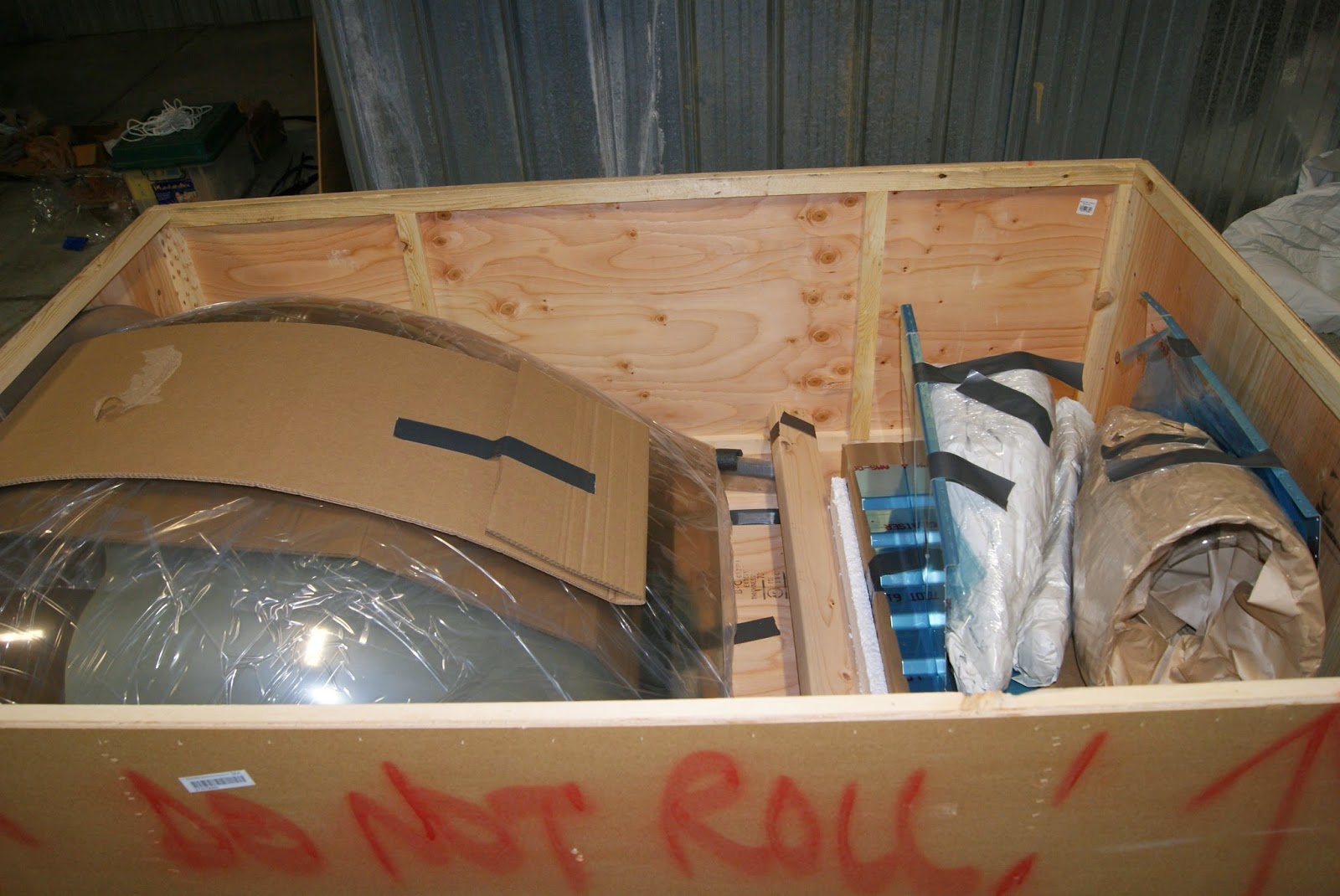 Beginning of the unpacking of the finishing kit crate.

The left half of the crate in the above photo contained the canopy & canopy frame, upper and lower engine cowls, landing gear legs and three tires.  The right half of the crate contained the drawings, wheels & brakes, nose gear components, landing gear fairings & associated hardware, motor mounts, fuel tank components, and a large cardboard box that containing electrical wiring and associated components, control system components, a large bag with various small parts and numerous plastic bags of hardware ... plus plenty of miscellaneous stuff. With the bubble canopy and engine cowlings (seen in background) removed, the landing gear legs, tires and canopy frame can now be seen. 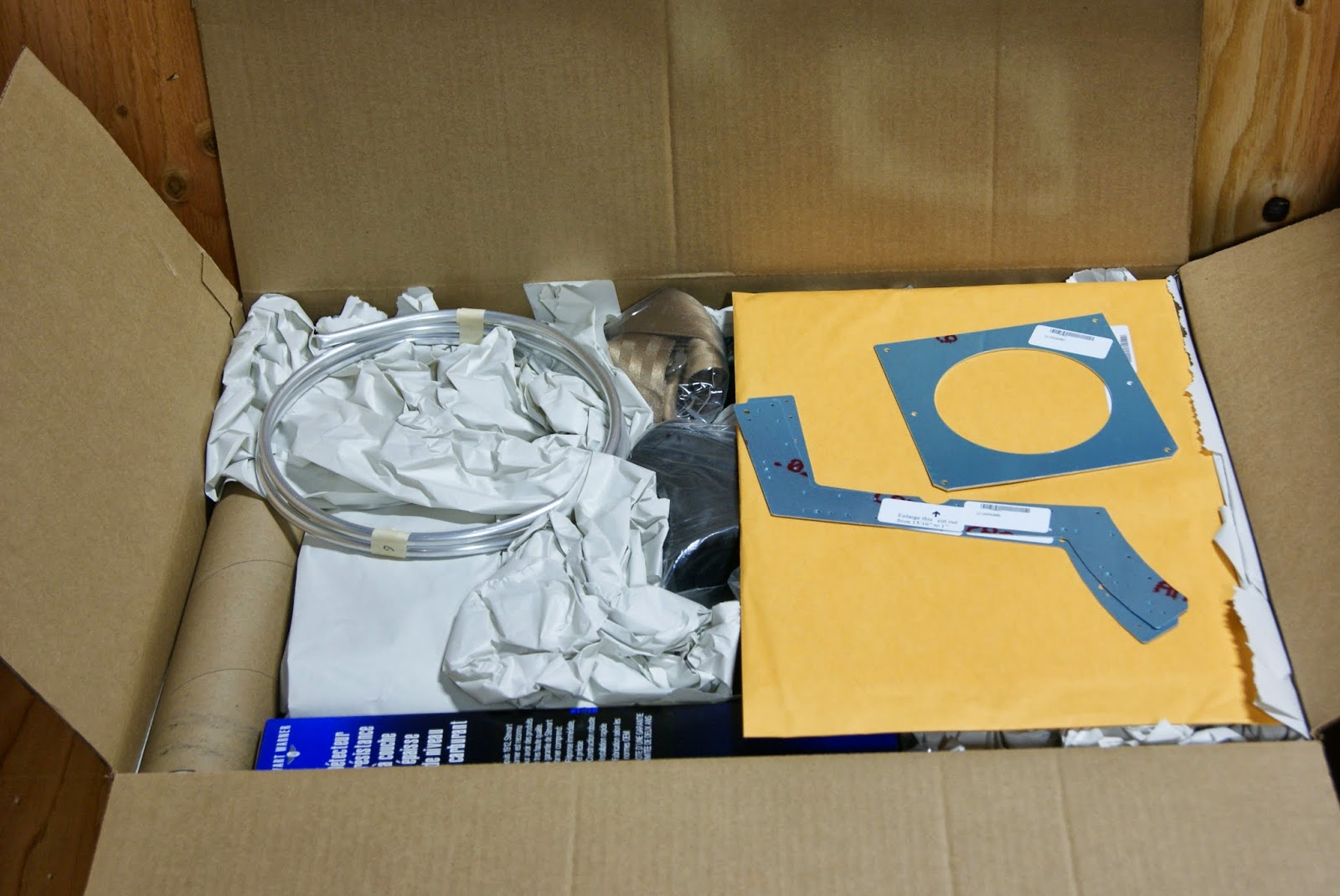 Starting the unpacking of the totally stuffed cardboard box. 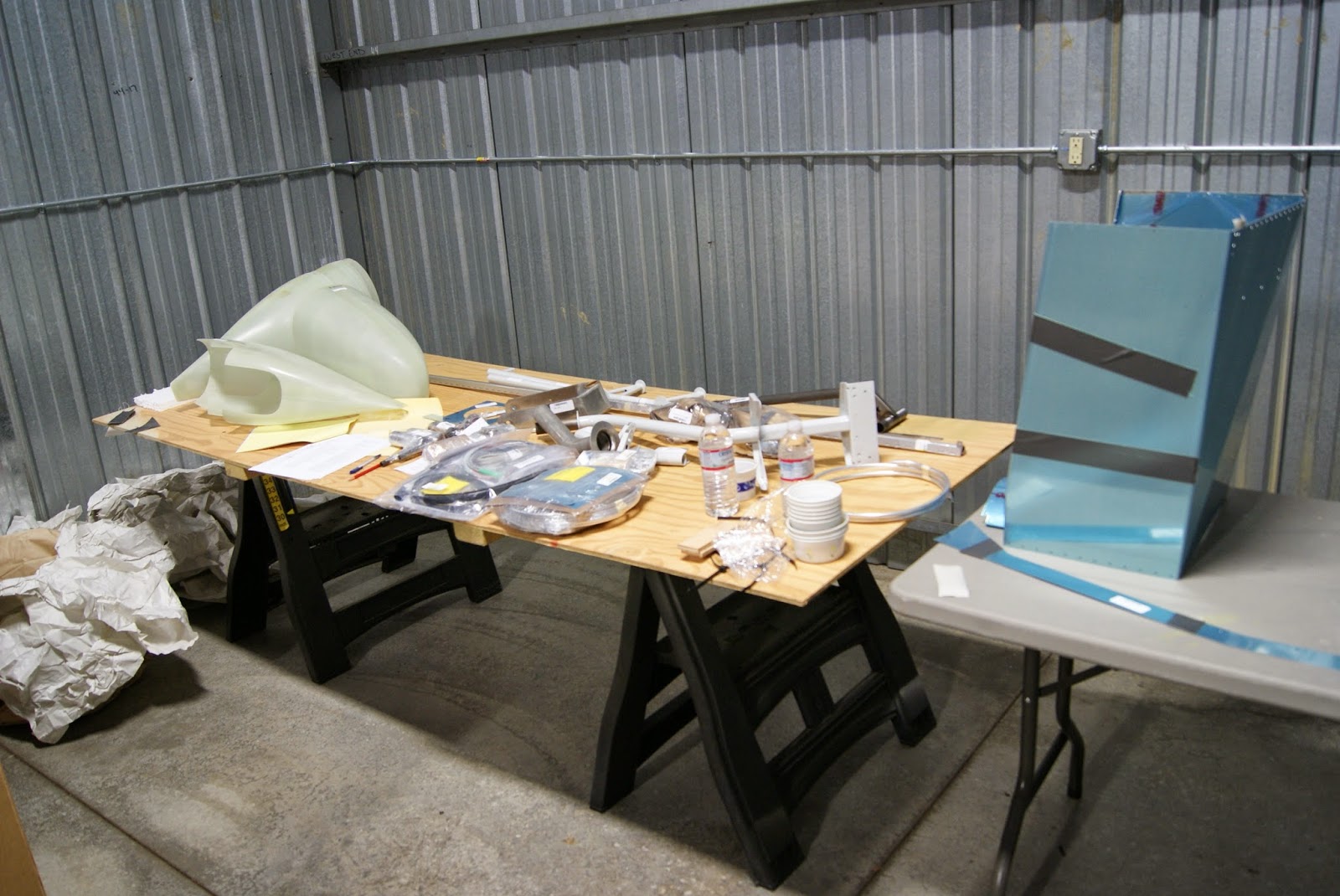 Inventoried parts-o-plenty on the table ready to be stored on the yet to be assembled shelving units … yet another project for tomorrow.

Ran out of time this afternoon to finish the inventory all that is left is a large plastic bag filled with miscellaneous small parts and hardware. Thus far, nothing is unaccounted for and all the weldments look good. I may have an issue with one piece that appears as though it may have warped during welding … however it may be that way by design so need to check with Van’s about it on Monday.
Posted by John at 7:49 PM