Today connecting the wires to the connectors began along with the instillation of two cooling fans on the instrument panel base. Work began with attaching two cooling fans onto the F-1202B instrument panel. The instructions instruct the builder to attach the fan’s ground wire onto a mounting screw that secures the fans onto the instrument panel base. This instruction is accompanied by a caution warning not to break the tabs on the plastic fan from over tightening. I submit ...  if the fan needs to get its power ground through the mounting hardware … the hardware NEEDS to be tight. 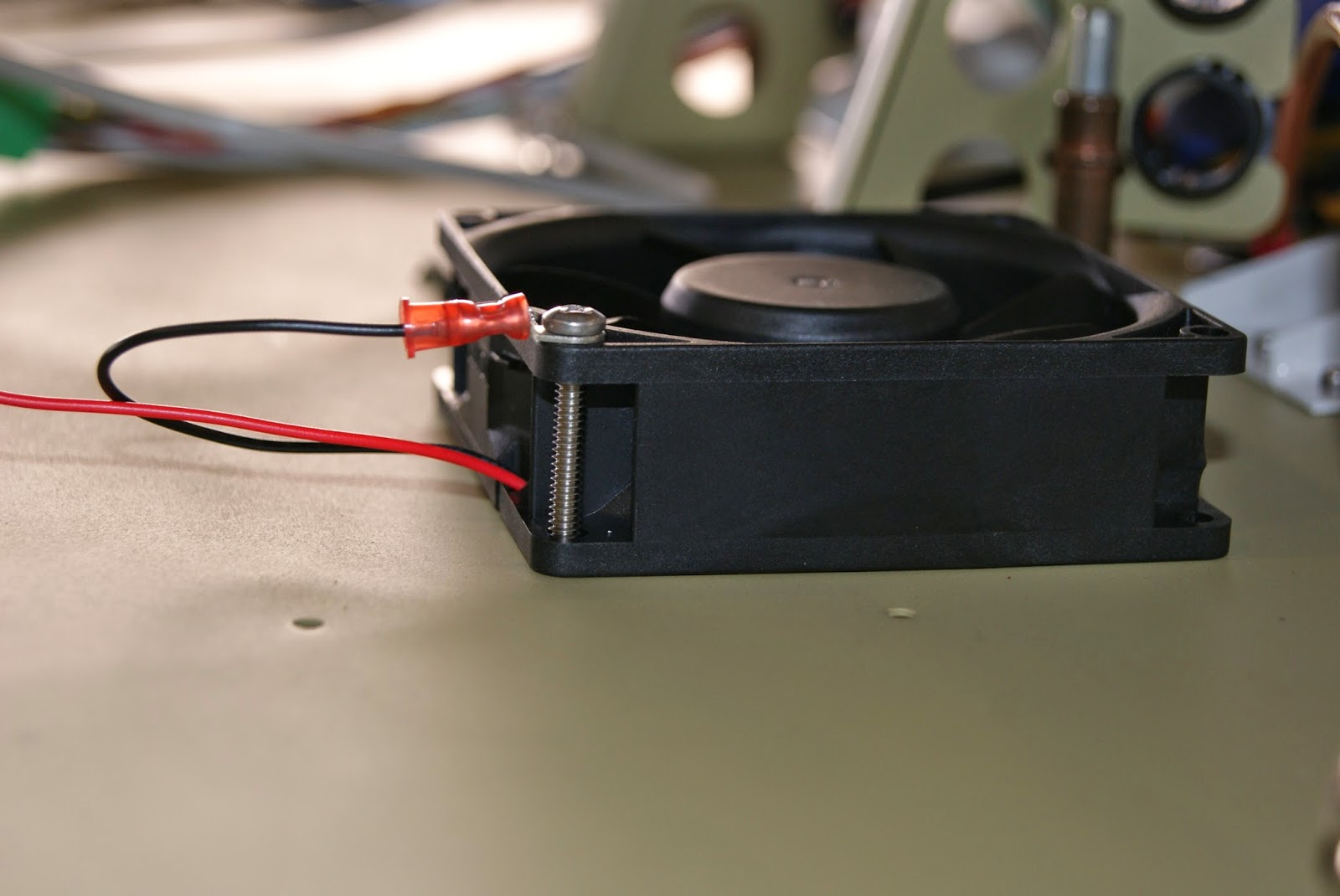 One can see how the mounting hardware could potentially break the unsupported eyelet on the plastic fan while tightening the mounting screw to obtain good grounding for the fan motor.

Builders may want to consider the DOG Aviation solution of using the lower  eyelets on the fans as mounting points for the hardware. 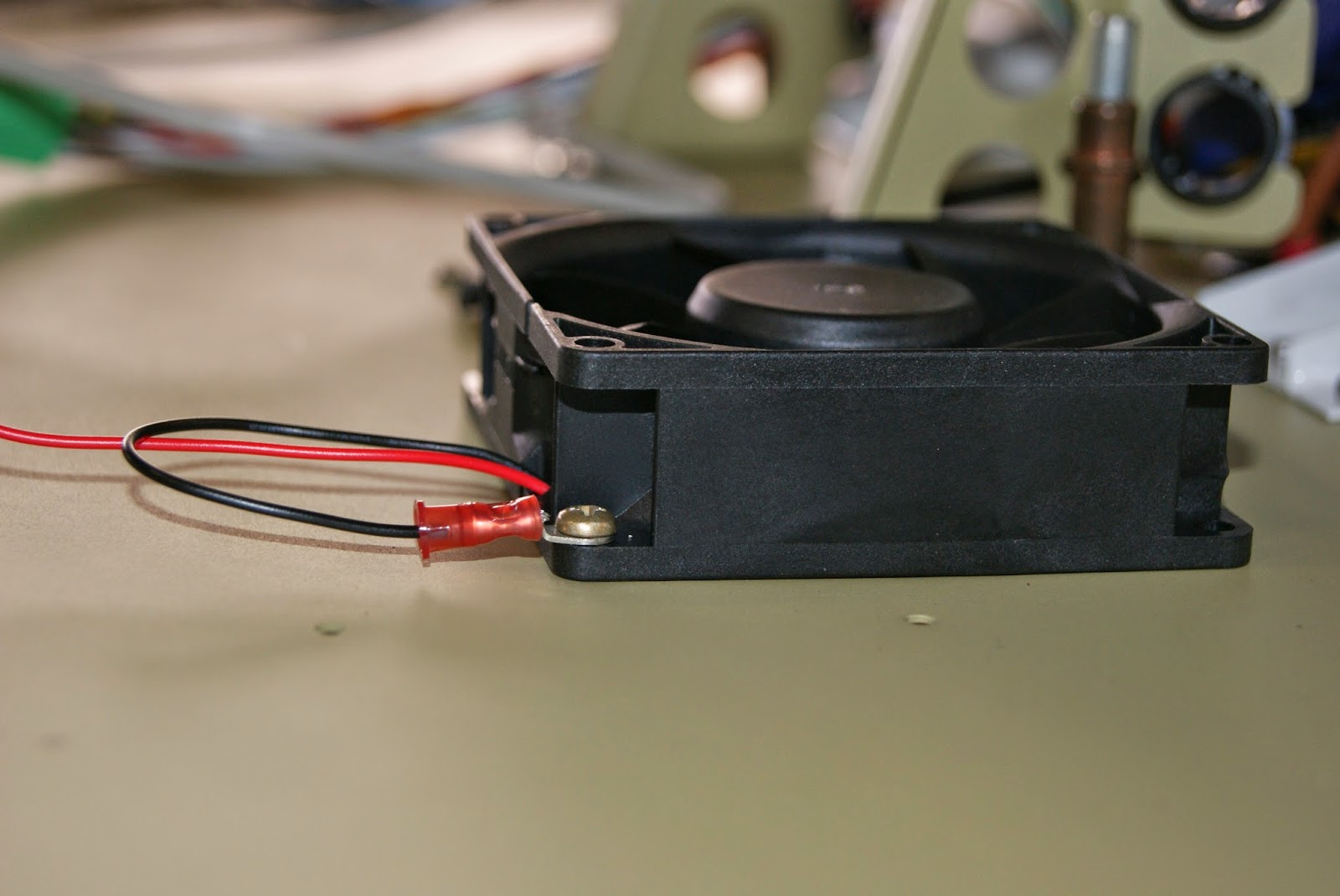 Shorter screws were used to mount both fans utilizing the lower mounting eyelets. Now the grounding screw can be made quite tight without fear of breaking an unsupported eyelet on the fan.

The very long MS51957-36 screws (way longer than they need to be) were substituted with much shorter MS-35206-230 screws which were on hand and placed in the lower mounting eyelets. Now there is not a possibility of breaking off an eyelet while tightening the hardware to develop good ground connections for the fans.

Having been distracted with the screws for mounting of the fans, the two fans were screwed onto the F-1202B instrument panel base using the same positioning as shown in the drawing below. Ultimately that proved to be wrong. 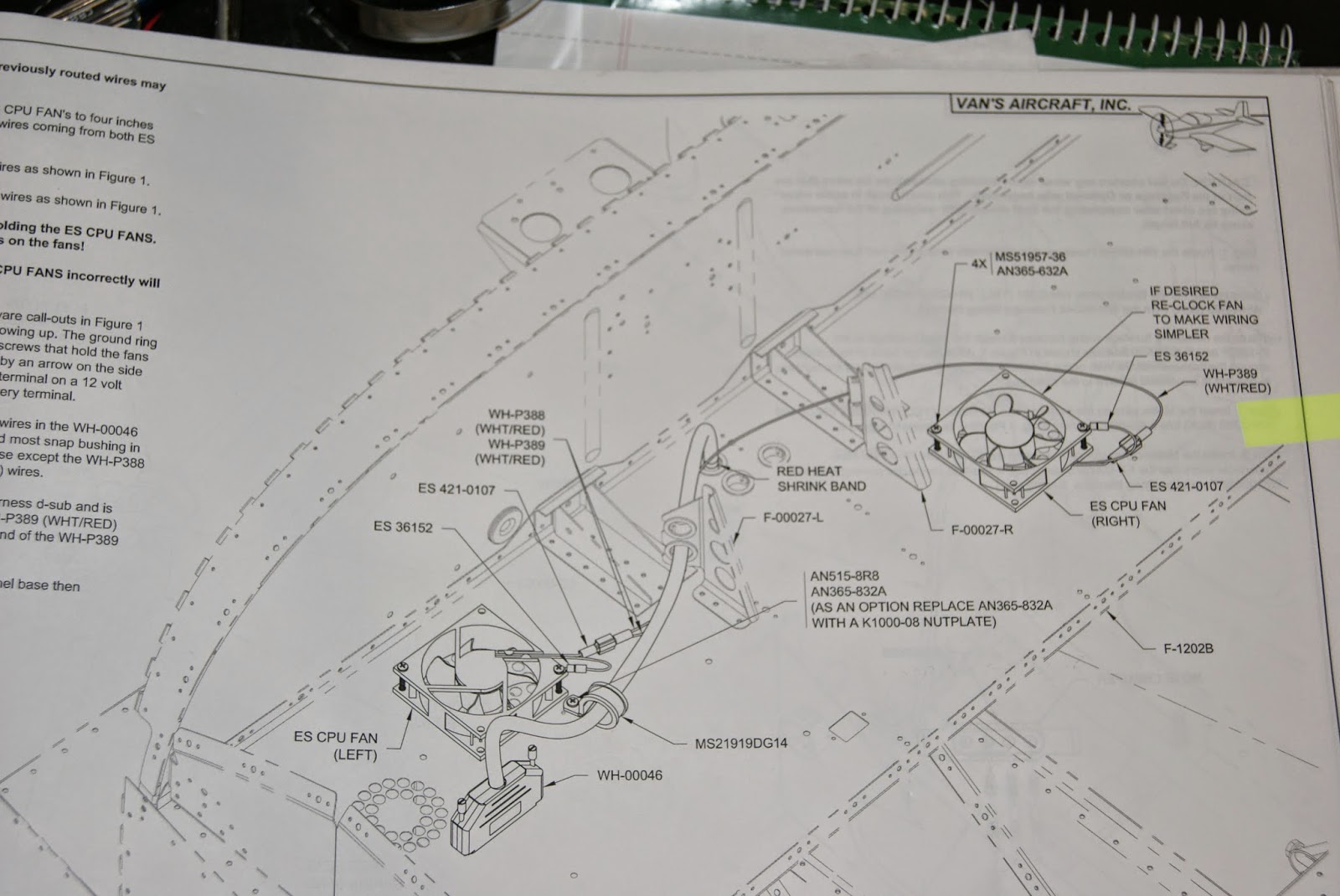 Discovered this drawing in the plans shows an incorrect fan mounting ... the fans need to be flip flopped for the airflow to be per the plans.

Redo ... nothing like creating work for yourself and needing to redo because of not reading an entire paragraph. After mounting the two fans as shown in the above drawing, the next sentence in the instructions says to make sure the arrow on the fan points down on the left fan and up on the right fan. To make the airflow as  per the plans, had to uninstall both fans and flip them over. Lesson learned …. the final result may not always look like the drawing.   Being curious, had a look at older drawings on the Van's site and apparently at some point the fan’s airflow direction was changed … from left fan blows up and right fan blows down (which matches the drawing) … to the new way which now has the left fan blowing down and the right fan blowing up.  Apparently the positioning of the fans in the drawing has not been redrawn to reflect this change. Guessing because the Dynon Skyview sits directly in front of the left fan, it is thought better cooling will be acheived by puling the warm air away from the Skyview.

Continuing on the wiring the three wires for the fuel flow sensor were inserted into a Molex connector then plugged into the fuel flow's connector. This was followed by completing the wiring for the auxiliary audio connector. When wiring the Molex connectors the F-398 left audio wire was placed on pin 1 (tip) and the F-397 right audio was placed on pin 2 (ring) as covered in the previous post. 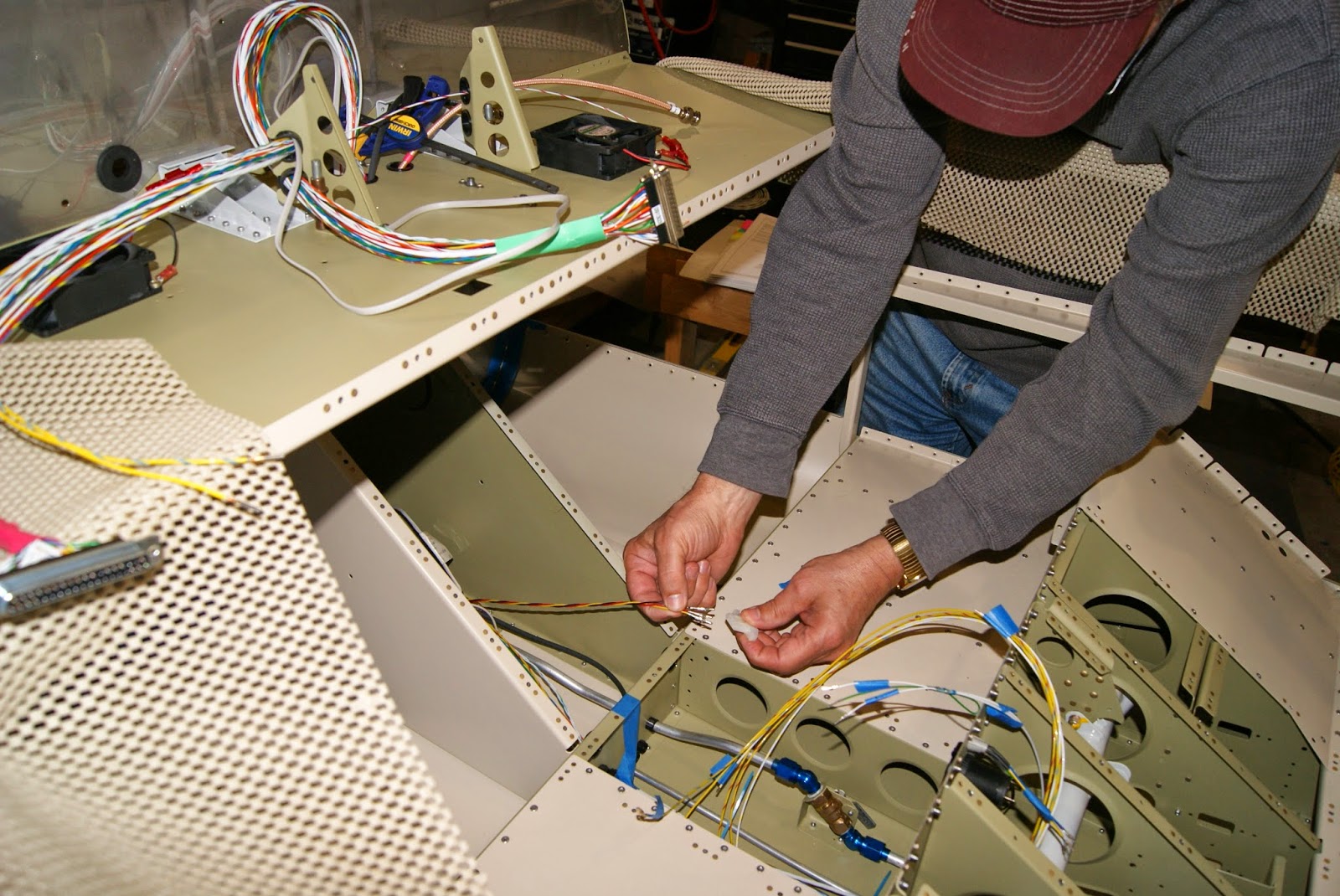 About to insert the three twisted wires for the fuel flow sensor into a Molex connector. 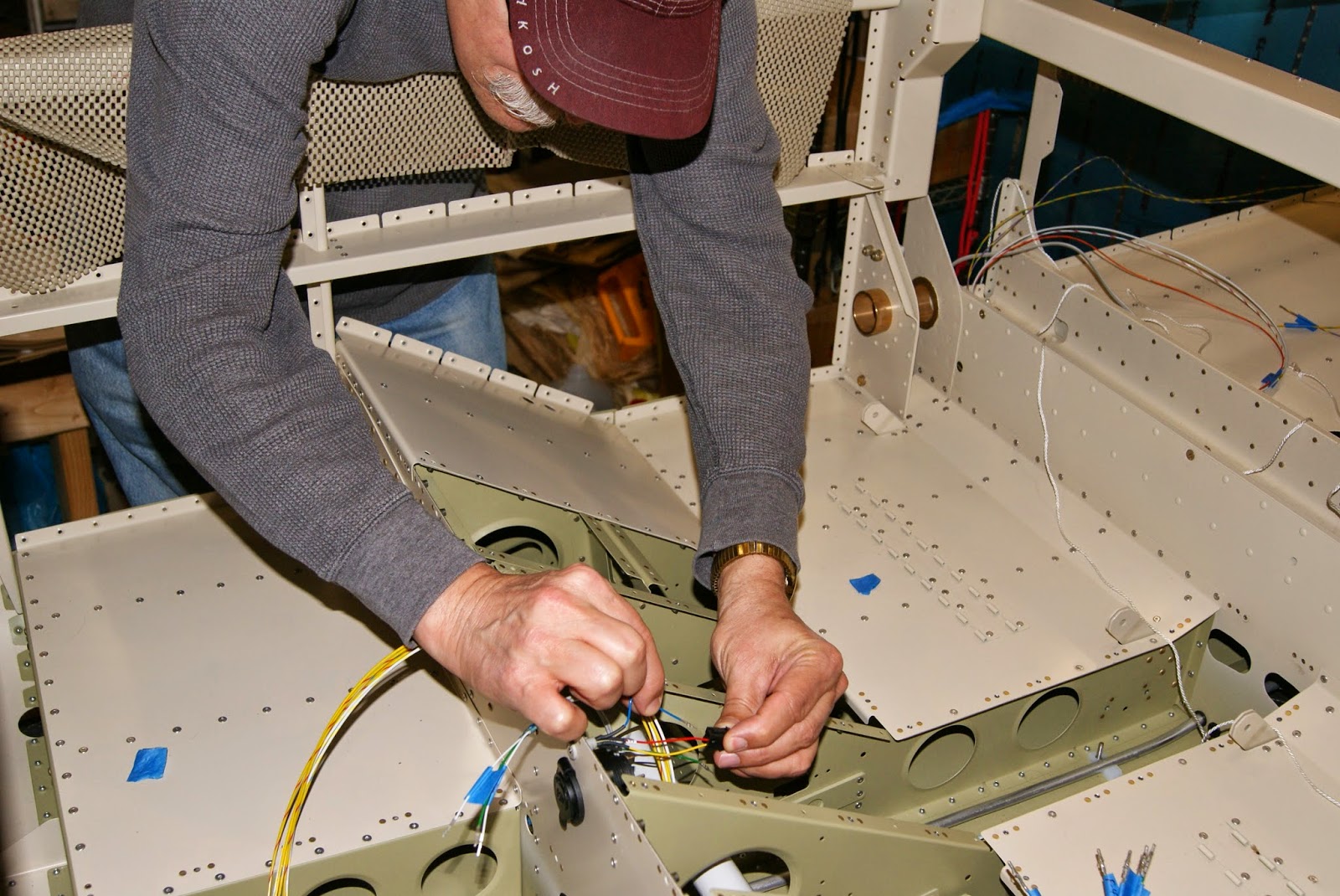 Connecting the auxiliary audio jack wires to a micro Molex connector.
Posted by John at 10:12 PM