Yesterday, was able to begin preparing the Rotax 912 ULS engine for instillation in the DOG Aviation RV-12. The process involves changing out a couple pieces of hardware, along with the disconcerting tasks of grinding off a lug on the starter and dismantling the upper portion of the Rotax engine so an air shroud can be custom fit. To fit the air shroud on the engine, basically everything that is attached above the cylinders and heads requires being temporarily removed.

Time to put away all the SAE wrenches, sockets, Allen drivers, etc. and bust out the metric hand tools … we are about to enter “The Metric Zone”. This would also be a good time to bust out your copy of the Illustrated Parts Catalog to page through it and become familiar with its contents … in addition to the parts drawings, the Illustrated Parts Catalog also contains important information regarding the torque values for the parts, lubricants, sealants, etc. There is a chart in the beginning of the catalog that defines the default torque values based on the various sizes of the hardware … in addition, if a part requires a nonstandard torque value, it is stated along with the part description for the part. Another key component of the Illustrated Parts Catalog is the parts drawings also identify special lubricants or sealants that may be required for the part at that location. 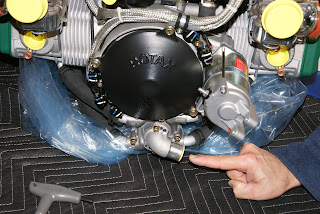 The water inlet is now rotated to the position Van’s desires for the RV-12 Rotax 912 instillation.

Began reading ahead to see what else is involved to prepare the engine for instillation and based on the work activity, decided it would be best to change the order of work. I was aghast when I read that after removing the carburetors and intake manifolds and water ports, there was a step that requires cutting off a lug on the starter. The potential for getting metal filings into the engine is greatly increased if this were to be done after removing the top of the engine. Also there is a step to remove the spark plugs so the engine can be turned over to check the gap on an ignition trigger coil and then leave the spark plugs loosely in the hole for a subsequent engine rotation … this is followed by steps to remove the starter lug and file the fiberglass air shroud until it fits the engine. My plan is to cut the starter lug off first thing with the engine covered with a trash bag. Next I’ll skip past the step to remove the spark plugs until the air shroud is filed to shape. Once all the cutting is completed, the engine will be cleaned off with a vacuum cleaner and compressed air to remove any fiberglass or residual metal dust and then the trigger coil timing will be performed prior to installing the engine mount. 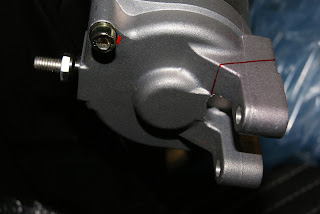 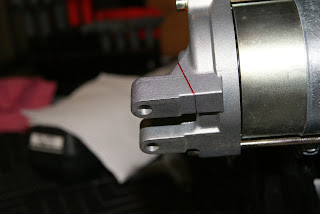 The 1/4" line is to be made forward of and parallel with the joggle as can be seen here.

The plans call for using a hack saw, but I opted to use a Dremel outfitted with a cutoff wheel to make the cut. Prior to firing up the Dremel tool, the engine was covered with a plastic trash bag to keep aluminum dust off the engine. The initial cut was made using a used cutoff wheel … discovered the cutoff wheel was worn down enough that it would not cut all the way through the lug. Replaced the cutoff wheel with a fresh 1 1/2" wheel and finished the cut. Turned out great. 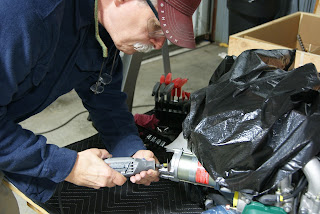 Carefully making the cut to remove the upper lug from the starter using a Dremel tool outfitted with a 1 1/2" cutoff wheel. 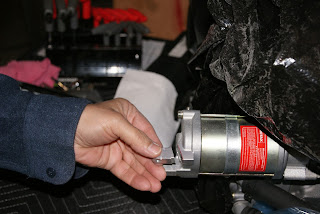 Removed lug from the Rotax starter before dressing with a file.

The cutoff wheel made a nice smooth cut, so there was not too much filing required to get things totally smooth. I did discover a couple of tiny air pockets in the casting which can be seen as spots on the sanded surface. 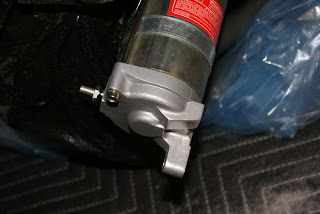 Finished starter with the upper lug removed and the cut dressed smooth.

Moving on, the aft A1 & B1 wiring connectors for the ignition modules require labeling and removal from the mounting bracket. The rear screw on the ignition module securing a ground wire and a wiring harness clamp needs to be removed. 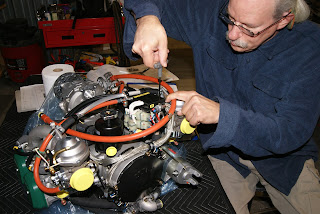 Removing the rear screw on the ignition module that secures the wire clamp.

The A1 and B1 ignition connectors need to be seperated ... this requites GENTLY inserting a small screwdriver under the housing to release the lock so the connectors can be separated. 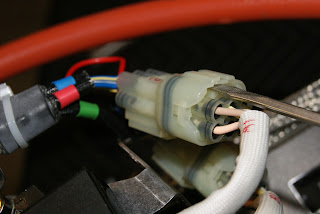 A small screwdriver is GENTLY inserted into the connector as shown to release the lock so the A1 & B1 connector can be easily separated. 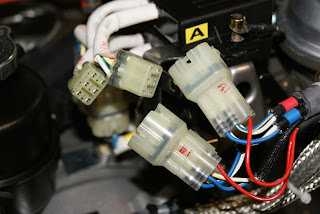 Separated A1 & B1 connectors.
The plans call for removing the trigger coil’s left mounting screw, spacer and small wire clamp shown on the left in the photo below. 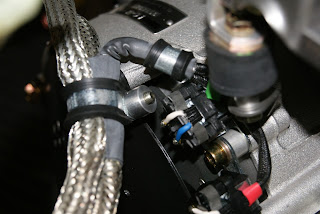 The left mounting screw for the trigger coil is removed. Looking closely, one can see the spacer and small wire clamp that will be removed. 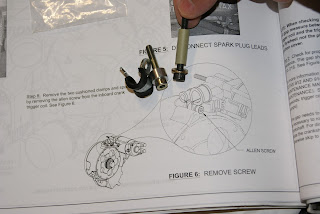 The screw and spacer on the left are both replaced by the longer spacer and mounting screw in my fingers … the small clamp is discarded altogether.

I found it odd the small clamp is discarded and wondered why? Paging forward in the plans, it appears the reason for the longer spacer and screw is so the big wiring harness can be moved out further so there is clearance for the engine mount. It appears to me it may be a close fit in this area and the small clamp would likely interfere with the engine mount. I’ll know more when I get to that point, but that is how it appears to me at the moment after perusing the drawings. The following photo shows the new longer spacer and longer mounting screw. I did not realize the focus was off as much as it is but the longer primed spacer can be seen under the black wire and the Adel clamp holding the braded wiring harness is now mounted further away from the engine casing than it was originally. 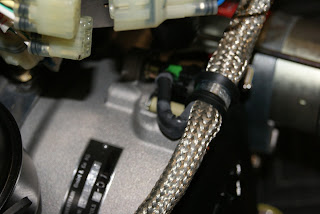 Silver braided wiring harness mounted with the longer screw and longer primed spacer … sorry about the blurry mess (where is JPW when you need him?). 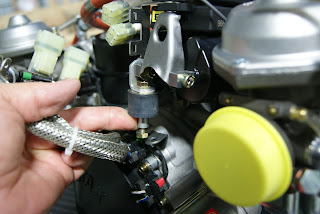 The nut securing the aft mounting bracket for the ignition module is removed … the L bracket where the assembly came from can be seen in the background below my finger. 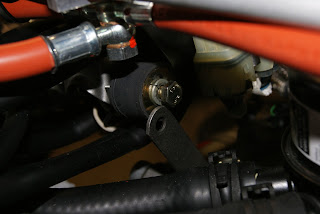 Left mounting bolt for the ignition module removed from the mounting bracket.

Will try to get more engine prep work done later today but with the warmer nighttime temperatures we are having, the plan is to mix up a batch of fuel tank sealant and finish off installing the fuel gauge and fuel sending unit on the fuel tank, then seal the instrument panel area with the leftovers. Of course, the tank will cure nicely in the hot box regardless of the tempatures but the selant on the instrument panel will be subject to overnight low tempratures in the unheated hangar.