Today, the DOG Aviation procurement department was able to find a sale on a torque wrench which will fill in the gap between the two torque wrenches already in the shop. The new torque wrench has a range between 10 to 75 foot pounds in half pound increments, which nicely fills the range of 12 to 20 foot pounds the other two wrenches can’t cover. 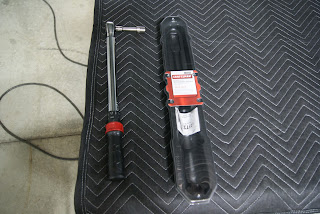 Due to seemingly week long obligations, only had enough time to take the new torque wrench to the hangar and retorque the engine mounting bolts and begin another minor project discussed later in this post. The castle nuts for the engine mount are to be tightened to a torque range of 160 to 190 inch pounds (13.3 to 15.8 foot pounds) … however, they should to be torqued to the lower limit of 160 inch pounds and if the cotter key fits onto the hole in the bolt great … if not, the castle nut is to be tightened further until the castle nut is clear of the hole in the bolt so the cotter key can be inserted through the mounting bolt to lock the assembly. To accomplish this, the new torque wrench was set to 13.5 foot pounds and the castle nuts for the two lower engine mounts were tightened … of course, the holes in the bolts were covered by the castle nuts so they required further tightening before the cotter pin could be inserted.

To torque the upper two engine mounting bolts, the sheer size of the head on the torque wrench will not allow it to fit into the “V” of the WD-1221 engine mount standoff so a crows foot wrench attachment was required. As covered in a post on January 8, 2014 when using a crows foot wrench attachment on a torque wrench, it changes the overall length of the wrench which affects the applied torque. There is a formula and instructions on how to calculate the offset here:

Using the formula and measuring technique that can be found in the above link, my 9/16" crows foot wrench attachment adds .9 inches from the center of the bolt to the center of the 3/8" drive on the torque wrench, so the required the torque wrench setting needs to be adjusted down to 151 inch pounds or 12.59 foot pounds to achieve the desired applied force of 160 inch pounds (13.3 foot pounds) at the bolt. 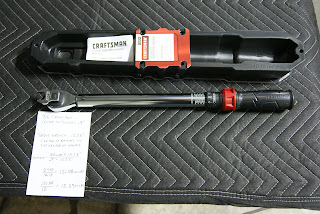 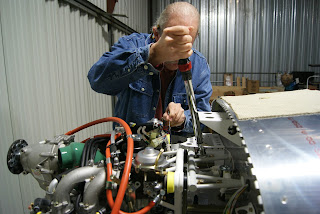 After the desired torque was achieved, the castle nuts were tightened further until a cotter pin could be placed through the hole in the bolt.

Onto the battery grounding modification: One of the items ordered a few weeks ago was a grounding block manufactured by B&C Specialty Products. The rational behind this is to move the electrical system grounding to the RV-12’s firewall as opposed to keeping it on the powder coated battery box components as suggested in the plans.  Frankly, I feel grounding the electrical system to the firewall just makes good electrical sense. Was actually searching for a small grounding block assembly but could not find anything suitable, so decided to order the 24 pin unit in the photo below ... which is total overkill in that nowhere near that many grounds will actually be used. The grounding stud is the main item of interest but the additional spade connectors will allow making solid ground connections for sensors and other electrical items on both sides of the firewall. 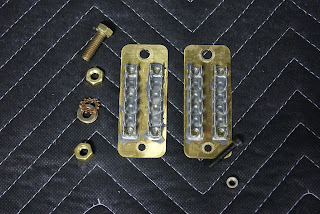 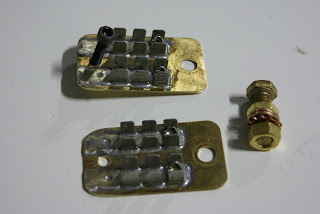 Both grounding blocks after being cut down a little. 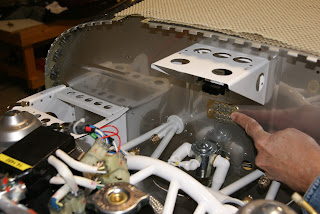 Approximate position of the modified B&C grounding block ... this will be the firewall grounding point for the battery.
I would have liked to have been able to drill the mounting holes for the grounding blocks prior to mounting the engine while access was straight on … but the engine hoist needed to be returned, so will now need to use an angle drill to make the necessary holes. Fortunately, access is still quite good so this should not pose any problems.﻿
Posted by John at 9:23 PM