Although not much assembly progress has taken place in recent days, the DOG Aviation R &D and Procurement departments have been hard at it researching and amassing goodies for the finalization of the RV-12. Most everything ordered has come in with the exception of one item ordered from .  Three items will be covered in today’s post and the others will be covered in depth in future posts.

A change has been made to the instrument panel regarding the backup instruments being installed on the DOG Aviation RV-12’s instrument panel. Fortunately, no holes were drilled in the right instrument panel yet … so the change only required a lot of measuring and rearrangement of the Sharpie lines. Originally, the plan was to only install a backup airspeed indicator and altimeter. Now they will be accompanied by two additional instruments … a vertical card compass and vertical speed indicator.  Admittedly, I’m not sure how well the compass will work mounted in the panel but decided to go ahead and give it a try … if it does work out, great!  If not, it will likely be replaced with a digital compass. 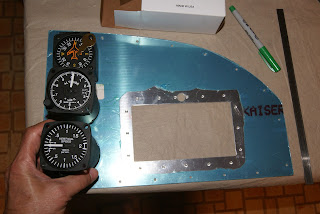 The new finalized arrangement for the backup instruments being installed into the right instrument panel. From top to bottom … a PAI-700 vertical card compass, UMA altimeter and UMA vertical speed indicator.

Admittedly, there is not an abundance of leftover space, but all three instruments will fit in the panel. Once the finalized positioning was established and marked onto the panel, #30 holes were drilled at the center point for each of the three instruments for positioning a 2 1/4" panel punch tool. Fortunately, I discovered one of the repair facilities at the airport has a hole punch, so the two panel pieces will be punched this week allowing the panel parts to be sent off for powder coating in the near future.

In addition to the instruments, one of the items recently ordered is the pull cable for the parking brake being installed in the DOG Aviation RV-12. Up until now its positioning had not been finalized. Was thinking of installing it either on the left side of the instrument panel or in the throttle quadrant.  To verify spacing, I laid out the throttle, brake and choke cables using the spacing on Van’s center panel piece and decided not to center the brake cable between the throttle and choke controls. As can be seen in the photo below, yes, the brake cable assembly physically fits nicely between the throttle and choke levers … however, that positioning leaves little room for a pilots fingers to adjust the throttle’s friction adjuster without interfering with the brake cable’s knob. 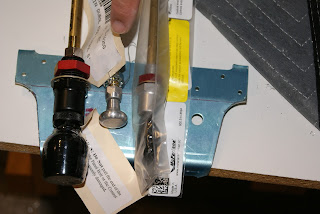 One can see there is little room to get a finger onto the  knurled throttle friction adjustment without interfering with the knob for the parking brake cable. 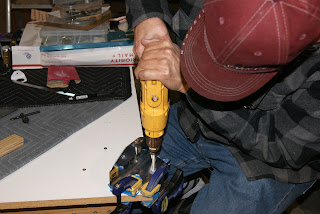 Using a step drill to enlarge the throttle control mounting hole to 3/4". 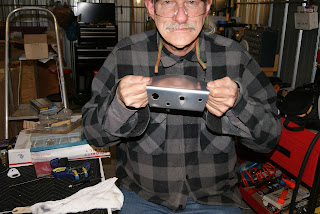 Completed mounting panel for the throttle, parking brake, choke and cabin heat controls viewed from left to right.
Posted by John at 5:01 PM

Email ThisBlogThis!Share to TwitterShare to FacebookShare to Pinterest
Labels: Modifications