Yesterday was another monumental occasion at DOG Aviation marking another major milestone … the Rotax 912 ULS engine was successfully mounted onto the firewall of the DOG Aviation RV-12.

With the assistance of Bernie and later joined by Mike, we were able to mount the Rotax engine onto the RV-12 with relative ease once some preparations were out of the way. The tail cone was propped up a little to place a downward force on the front landing gear and the weights that were hung over the nose gear so the RV-12 could be rolled outside during canopy fiberglass work were removed to make way for the engine.

Tom, (a fellow local builder nearing completion on his Van’s RV-10), loaned me his engine hoist a few weeks ago ... so we had a hoist available to lift the engine in position. The hoist worked great!!! Thanks Tom! … your hoist sure made things much easier. 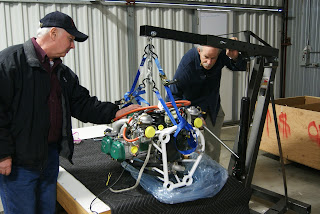 Bernie stabilizing the engine while I slowly lift it off the workbench with the engine hoist … at this point the engine is a couple of inches off the table.

Once we got the engine stable and off the workbench, it was wheeled over to the front of the airplane. The engine is mounted onto the firewall at four mounting points. Each mounting point has a large rubber isolator with steel sleeves and aluminum bushings that are slid into the sleeves. With the engine on the hoist, the mounting isolators and bushings were test fitted along with the mounting bolts and it was discovered the bolts would not go through the powder coated washers until the powder coating was removed from inside the hole in the washers. 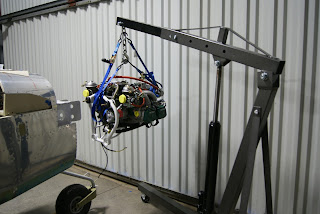 Test fitting of the isolators to make sure all the parts fit correctly prior to attempting to install the engine onto the firewall.

There were also a couple of engine mounting bushings that did not want to slide into the male isolators, so they needed to have some tiny burrs removed … then a very thin film of slippery Corrosion X was also used to help slide stubborn bushings into the sleeves on the isolators. After a little tweaking, all the parts began playing nicely together and it was time to actually mount the Rotax 912 ULS engine onto the RV-12’s firewall. The engine was lifted to an approximate position by eyeball and moved sideways into position. We elected to install the engine from the side as opposed to installing the engine from the front. Basically, it was cold outside and we did not want to open the hangar doors … plus it would have required moving the whole airplane aft in the hangar because there is a large ridge by the door that would have hung up the wheels on the hoist. Sliding the engine in position from the side was the easiest option … nothing had to be moved and the access was good. 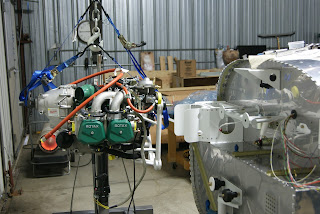 The engine was raised to an approximate eyeball position and ready to be slid sideways across the front of the firewall to get into position to be slid aft to the mounting points.

As luck would have it, the height of the engine was almost perfect it only needed to be raised about a 1/4" to achieve a perfect alignment. The lower mounts were installed first as suggested in the plans, followed by the upper mounts. The upper mount took a few moments to bring into alignment. Basically, after the castle nuts on the lower mounts had a couple of threads captured, the engine/mount was slid forward so a small gap could be created at the WD-1221 upper mount so it was possible to look in and see which way the assembly needed to shift to allow the upper mounting bolts to slide into the holes on the WS-1221 upper mounting point. All and all, the end result was almost anticlimactic in that the engine mounting did not put up much of a fight and all things considered, the engine mounted onto the firewall quite easily. 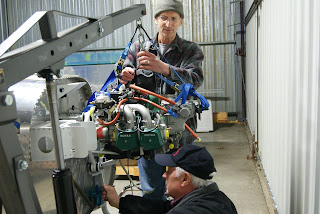 The engine is now mounted onto the firewall. Bernie was rotating the mounting bolt a little to get the hole for the cotter pin vertical while Mike began removing the tie down straps.

The bolts were torqued and the cotter pins were placed into the holes but not bent. The DOG Aviation procurement department needs to locate a different torque wrench. Lately there have been required torques that are too high for my 150 inch pound wrench and too low for the foot pound torque wrench which starts at 20 foot pounds. As an example, the engine mounts are to be torqued between 160 to 190 inch pounds which equates to 13.3 to 15.8 foot pounds and the M8 bolts used on the engine required 18 foot pounds so I need to find a torque wrench that fills that gap. Of course, in a pinch, a one foot long ratchet wrench or breaker bar can be used and pulled from the end with a fish scale until the scale reads the desired torque say 18 pounds (which is what I did for the M8 cap screw that needed tightening to 18 foot pounds). It would be nice to have the proper tool for the job. 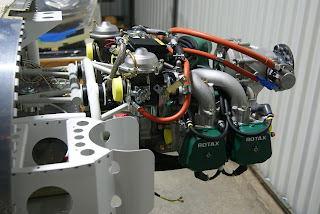 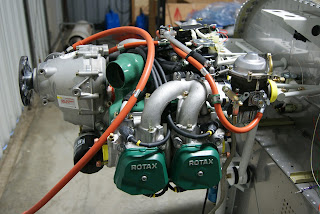 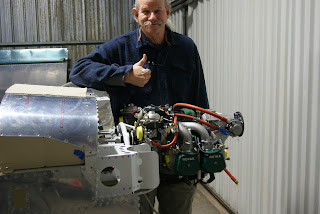 A major milestone at DOG Aviation, the Rotax 912 engine is installed on the RV-12’s firewall and nobody got hurt and nothing was broken. A job well done!

Thanks to Bernie and Mike for all the assistance and to Tom for allowing me to use his engine hoist.
Posted by John at 7:07 AM