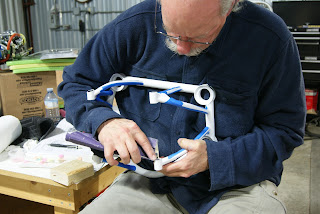 Sanding the powder coating away from the inside of the WD-1220 engine mount. 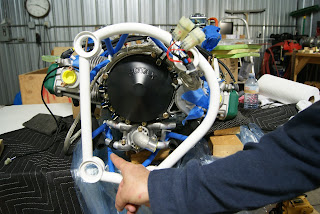 Finally!!! … the engine mount went past the water port my finger is pointing towards.

The engine bolt dilemma: Some history -- 5 years ago a builder identified an issue with the RV-12’s engine mounting cap screws coming lose. As word spread on the forums, more of the fleet was checked and it was discovered this was NOT an isolated issue … quite a few builders discovered lose bolts and, in a few cases, even missing bolts! Van’s was slow coming up with a fix … most likely due to the fact Rotax needed to get involved because the cap screw torque values were set by Rotax. Before an “official fix” came about, builders tried two different methods to keep the bolts in place one being blue Loctite and the other installing Nord-Lock washers (same washers that are used to bolt down the propeller). Both methods appear to work fine but each has a down side. Once applied, using Loctite prevents the cap screws from being torqued during inspections because torquing after the Loctite sets will brake it free thus negating its effectiveness. Nord-Lock washers are slightly larger in diameter than the head of the cap screw and need to be trimmed down a little prior to installing them so they will fit inside the engine mount ... a real pain. However, after the Nord-Lock washers are made a little smaller (a hassle), the up side of using them is the torque on the cap screws can be checked during inspections without negating the lock washer's ability to hold the cap screws in place. Thus far, builders who have employed either method have reported no subsequent lose bolts.

In the mean time, Van’s and Rotax decided the 26 foot pounds of torque on the cap screws was too low, so the torque has now been upped to 30 foot pounds and although not positive, I believe this is also when the recommendation came out to remove the powder coating from the mating surface on the engine mount as well. DOG Aviation is going to make a preemptive strike and use the higher torque setting of 30 pounds and ALSO ditch the smooth split lock washers and use Nord-Lock washers instead … something I can do now since the DOG Aviation RV-12 is being built under E-AB rules. And should a cap screw ever get a little lose (truly doubtful) … they will all get slathered with blue Loctite. 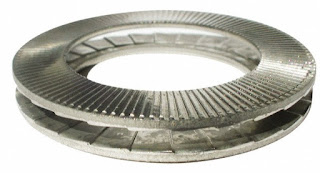 Photo of a Nord-Lock washer - they come as pairs, comprised of two thin washers with “ramps” that are placed back to back. The ramps lock with one another when the bolt is rotated in reverse keeping the bolt secure. They also have serrations on both sides and get a better purchase on the metal than an ordinary smooth split lock washer.

Unfortunately, prior to using the Nord-Lock washers for the Rotax 912 engine mount application, the washers need to be made slightly smaller in diameter so they will fit into the recesses in the engine mount. To do this, a metric bolt was used and electrical tape was wrapped around the shank so the Nord-Lock washers could be kept perfectly centered on the bolt. The Nord-Lock washers were sandwiched between some split washers and tightened on the bolt using a nut. The assembly was chucked up in a drill press and spun while a file was used to trim away some of the excess diameter. I filed away and checked with a micrometer until about 30 thousandths was removed bringing the diameter of the washers down to .630 thousands. 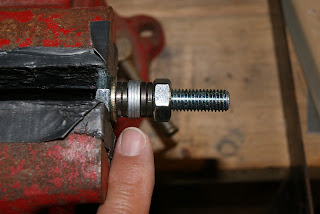 Fixture used to clamp to pairs of Nord-Lock washers so a file could be used to make the outside diameter a little smaller when the fixture was spinning on the drill press … my finger is pointing to the Nord-Lock washers.

Bernie came by to give me a hand with installing the engine but it was quickly realized the time spent shopping for parts to make the Nord-Lock filing fixture, checking the air gap on the trigger coil, sealing the FF-1207 air shroud with silicone and reassembling the engine meant there was no way the engine was going to get hung this work session. 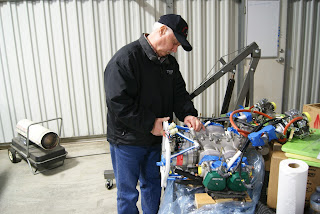 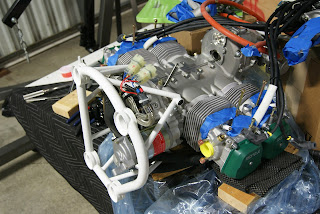 The WD-1220 engine mount installed and torqued ready to hang the engine onto the RV-12’s firewall.
Posted by John at 7:46 AM