Today was mostly spent bouncing around between a few unfinished tasks (most not worth mentioning) and at least getting one of the tasks totally completed … the modified throttle bracket. A cardboard template was made of the modified throttle bracket and marked with the desired location for the mounting holes. The template was placed on the instrument panel base so the holes could be marked from above using a #52 drill bit to make marks in the panel base ... then the cardboard was removed and all the holes subsequently drilled from above through the instrument panel base and into the throttle bracket. The holes were drilled one hole at a time … changing to a #40 drill bit once the #52 lead hole was through both layers of metal. This was done so each hole could be secured with a Cleco before drilling the next hole. 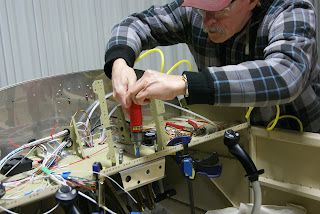 Drilling through the panel base and into the modified throttle bracket using a #30 drill bit.

The five mounting holes were drilled to a final size of #12 for the mounting hardware that will be used to mount the throttle bracket onto the bottom of the instrument panel base. This completes fabrication of the modified throttle bracket so it is now ready for powder coating. 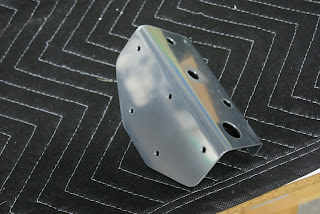 Completed modified throttle bracket … drilled and ready to be sent out for powder coating.

While the drills and drill bits were out, decided this would be the perfect time to drill the #12 and 5/16" holes in the firewall that will be needed to mount the modified B&C grounding block being added to the DOG Aviation RV-12.  I spent quite a bit of time trying to figure where best to drill the holes and ended up placing the ground block approximately 1 5/8" above the rivet line that secures the panel base to the firewall and centered under the manifold pressure sensor. A #52 lead hole was drilled through the firewall then enlarged to #30 so a step drill could be used to take the hole to a final size of 5/16" for the grounding stud. 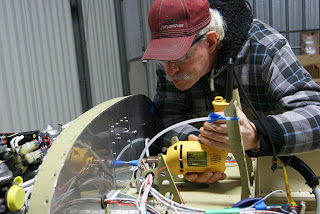 Using a step drill to enlarge the B&C grounding block’s mounting hole in the firewall to 5/16".

After the grounding block’s 5/16" mounting hole was drilled in the firewall, the grounding block was temporarily installed so the smaller mounting hole could be measured and drilled. Because of all the wires coming up in the vicinity of where the smaller #12 hole needs to be drilled, decided it best to drill the second hole from the forward side of the firewall. I just barely had enough room to drill the #52 lead hole … unfortunately, both the drills I had been using interfered with the engine mount when the longer larger drill bits were in the chuck … so an angle drill will be needed to complete the hole. By this time I was running out of time, so will use the angle drill to complete the drilling during the next work session and post photos of the completed B&C grounding block instillation.
Posted by John at 9:03 PM