Today was one of the most productive days at DOG Aviation in quite some time … got in a few hours of building in the morning and again in the afternoon while the drywall mud I placed on a kitchen wall dried. (Got to love slow drying mud … Gee Honey, can’t do anything more until that mud dries) .

Finished off installing the four nutplates on the forward spar which I had forgotten to countersink the nutplate rivet holes. Countersinking was a snap since the countersink cage was still set for #40 holes.  After countersinking, the nutplates which will be used to attach the upper and lower control horns were riveted in place. 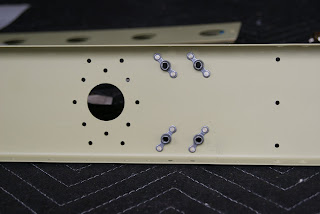 After the remaining nutplates were riveted onto the front spar it was time to move on to the hinge bracket assembly. There were two nutplates that needed to be installed on both the hinges. 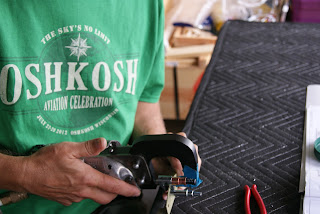 Riveting a nutplate on one of the hinge brackets. A Cleco clamp is used in
addition to a regular Cleco to help keep the nutplate flush to the bracket. 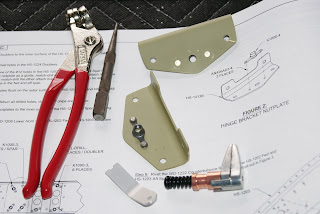 Once the hinge brackets were completed, work began riveting the two counterbalance brackets on the front and rear spars. The parts were pre-drilled a few days back and were already prepared and good to go. 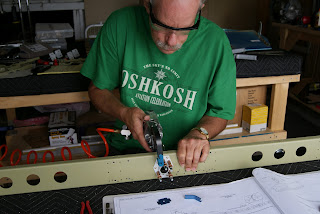 Riveting the counterbalance bracket to the front spar. 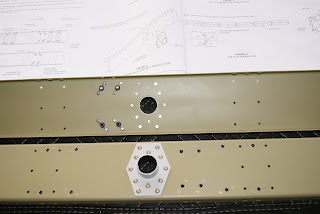 The next order of business for the day was another lesson in fluting.  In preparation for this moment I purchased a different type of fluting pliers from Bob Avery while at the Oshkosh AirVenture air show … glad I did because I needed them.  The ribs for the stabilator have very deep scallops and I discovered my original pair of fluting pliers placed gouges in the ribs because there was not enough metal for the tool to work properly.  The Avery tool has a more rounded end on it and was better suited for the task.
PATIENCE IS A VIRTUE HERE. 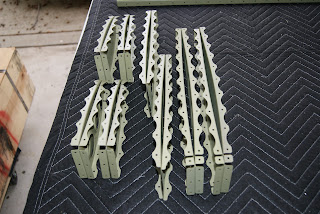 All the stabilator’s ribs placed back to back to illustrate the amount
of curve most all of the ribs had prior to fluting. 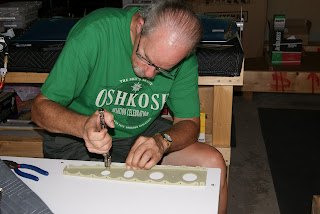 I also quickly discovered that it was best not to flute at the low point in the scallop
(dead center between the rivet holes) but up a little on either side of the low point. 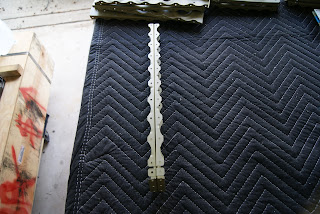 The first set of ribs I fluted - note the rib on the right was the first one I did before getting
smart and fluting higher on up on the curve where there is more metal to work with.


Fluting is an exercise in patience to be sure, because no two ribs act exactly the same. That said however, it is possible to get predictable results if starting an inch or two from one end and place downward pressure to hold the rib down to a flat surface just behind the area being fluted then use the fluting pliers a little at a time until the end of the rib begins to slightly rise from the flat surface with just a slight amount of pressure on the fluting pliers. Then move back 1 ½ inch or so and repeat the process until one side of the rib is fluted. Repeat the process on the other side of the rib. Now the rib should only require a little tweaking to get totally flat. I watched a YouTube video last year made by Allan Gilmore about this method ... here is the link to that video.
http://www.youtube.com/watch?v=jqNoVAQLo0M 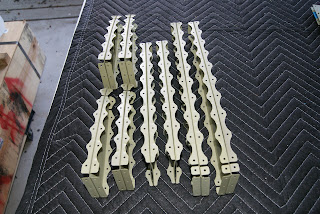 Finished pile of ribs … fluted and ready to install. Not bad for an amateur.