Yesterday, the canopy fairing was cut down to the final shape of the trim template. A piece of paper was cut 2 3/8" wide to bridge the gap between the left and right side template markings so a straight cut line could be drawn onto the  canopy fairing's bridge lay-up to connect the two sides. Once again, the Dremel outfitted with a cutting wheel was used to make the cuts. 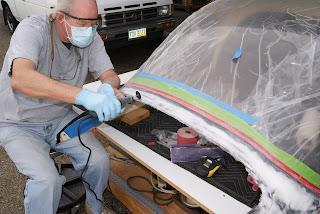 Using the Dremel outfitted with a cutting wheel to carefully cut the excess fiberglass material off the canopy fairing’s bridge lay-up.

If I were to pass along tips that worked for me, it would be to use a couple of clicks down from top RPM speed and once cutting, continually move the Dremel at a fair speed. It will cut through most of the fiberglass material on the first pass but likely will not go through all of it evenly. However, if you slow up you will be doing yourself a disservice, because the heat generated will melt the resin and the stickiness tends to bind the cutting wheel making it hard to move. I found it a lot easier to make a fast deep pass at a higher RPM then go back and spot tweak at a lower RPM until all the material was cut. By using a moderately lower RPM for tweaking the cut, if the material snagged the wheel, it would not tend to pull the Dremel out of your hands … instead, it would just stall the motor.

The cuts were made a little outside of the line and the remaining material was removed by hand sanding with the Dura-Block using 80 and 180 grit sandpaper. Have to say, the Dura-Block was all that was needed to shape the fairing to the cut line. Used the big round edge on the large curve, the flat sides on the straight edges and the wedge tip on the small inside curve. 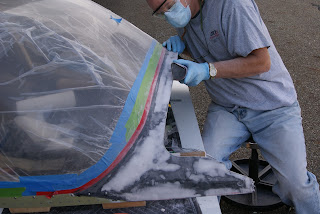 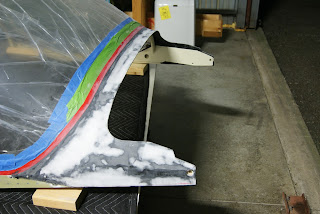 The completed canopy fairing cut to final shape. The fiberglass over the arms was left a little long so that area may require some trimming. Also still need to do a little smoothing where the fiberglass meets the canopy skirt … but at this point the canopy is airworthy and the project is a long way off from paint so will deal with that much later down the road.

The canopy assembly still needs to be placed back onto the fuselage and slowly opened so a check can be made to insure there are no areas of interference. If there is interference, the canopy needs to be removed and trimmed accordingly to remove fiberglass material from the interfering areas. Mike said he could give me a hand placing the fairing on the fuselage today. So hopefully with Mike's help, the canopy fit can be checked and fine tuned if necessary today to finish off this part of the RV-12's construction.
Posted by John at 5:47 AM