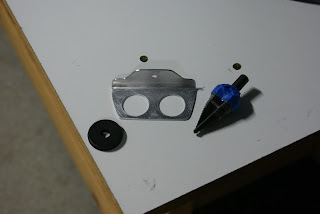 The fabricated dual sender bracket’s mounting holes for the two sending units were drilled to 1" and now ready for paint.

Awhile back, a preliminary test was made to determine if the two extra rocker switches for the fuel pump and left landing light could be installed in the area above the AV-50002 ignition start module … although not an abundance of room, it appeared as though they would fit.  Figured it was time to establish the final position and cut some holes for the switches. Played around with the positioning and decided upon centering the two switches directly above the left and right ignition switches. Measurements were made and lines drawn onto the F-00060 panel so a paper cutout could be placed onto the panel to verify the switches would indeed fit. For a cohesive look, the switch spacing was kept the same as the A & B ignition switches and positioned so there is enough room for labeling the switches. 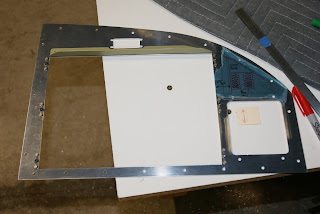 Locations for the two additional Otto switches were marked onto the F-00060 instrument panel. If one zooms in closely, the markings for the spacing can be seen.

Two #30 holes were drilled in the area of each switch location and then enlarged with a step drill. The two holes were then joined by using a Dremel with a cutting wheel and a file to enlarge the opening enough to allow access for the nibbling tool. 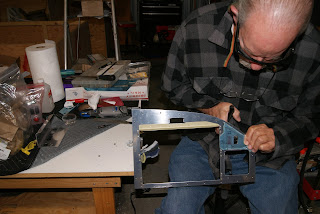 Using a nibbling tool to trim the opening just shy of the markings so a hand file could finalize the opening.

After shaping the switch mounting holes with the nibbling tool, the openings were brought to final size by hand filing and the switches were test fitted. 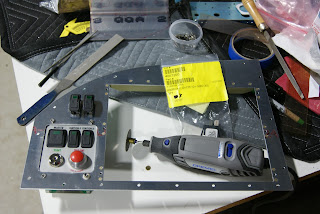 Completed openings with both Otto switches in position but not fully seated.
Did not fully install the switches at this time because the panel pieces will be sent out for powder coating soon.
Posted by John at 10:24 PM