Today, with the help of Mike and Bernie, the canopy was placed back onto the fuselage and bolted in place. The canopy was slowly raised while under careful supervision until interference with the upper forward fuselage skin was noted.  The forward portion of the lay-up on the canopy arms were hitting the upper fuselage skin (no surprise here I had left the lay-up slightly long). But what was unexpected is there was also a little snagging of the instrument panel as well. 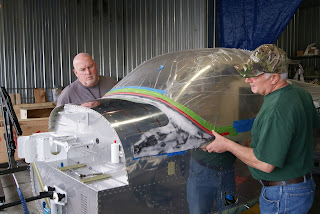 Bernie and Mike lending a hand with the fitting of the canopy fairing back onto the fuselage.

The canopy was unbolted then removed so the forward edge of the fairing that extended beyond the end of the canopy arm could be sanded a little shorter and the upper edge was rounded a little more. This needed to be done on both sides. Addressing the snagging of the instrument panel it was determined it was caused by a few small lumps of resin that had dripped down from the edge of the canopy glass forming tiny stalactites. These were easily sanded down to the level of the Plexiglas and fixed the issue.

The second test fit showed that the snagging of the instrument panel was solved … however, the canopy arm still touched the upper forward fuselage skin but this time the canopy was almost fully open. The canopy was removed again and the upper forward edge of both canopy arms were rounded down a little more to what should be the final shape.  Unfortunately, lost my helpers so will need to verify the fit later but feel it is good to go. 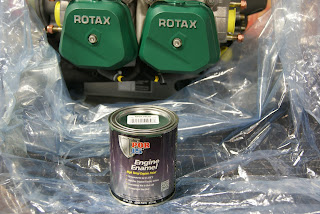 The POR 15 engine enamel in a Buick green # 42058 although not a perfect match it is close enough.

They say the POR 15 engine paint can be brushed on and the brush marks will flow out …. For the most part that is true. Not wanting to mess with the spray gun for only one piece opted to brush the paint on. This is the first time I have used the paint so like anything new, there is a learning curve. I knew not to work out of the can and to pour a small amount in a separate container. The paint is a little on the thick side and it should have been thinned a little because I quickly discovered the paint skins over very rapidly. Once brushed onto the surface to be painted, it set up so quickly it was almost impossible to keep a skinless wet edge or go back and touch up an area without leaving some marks. Thinning a little would likely have helped the skinning issue but spraying is probably the best route to go. 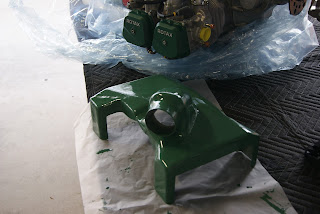 The cooling shroud after painting … the paint is still wet but one can tell the shade of the POR 15 Buick green is a little lighter green than the valve covers. Although not a really close match, I went for it anyway.

The DOG Aviation procurement department also picked up some POR 15 engine enamel in white for the firewall forward parts. Think I will spray it on those parts as opposed to brushing.
Posted by John at 10:36 PM