Yesterday, Bernie swung by the hangar to lend a hand with the final fitting of the canopy. We needed to remove and replace the canopy a hand full of times before the canopy could be opened fully without contacting any metal it was not supposed to touch. Most of the problem was interference from the bottom edge of the canopy lay-up  touching the longeron/ fuselage side skin as the canopy approached fully open. Not wanting to get too aggressive, the lay-up on the lower forward portion of the canopy arm was sanded a little, test fit and sanded some more until the fit was acceptable. Basically a curve was sanded into the lay-up. 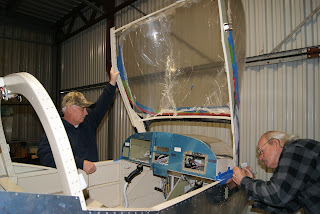 Bernie holding the canopy assembly open while I marked the area of interference with a Sharpie pen.

Now that the canopy is fitted, it will be set aside so there will be easier access for installing the instruments and wiring along with modifying each of the three panel sections. Not having the canopy fairing totally fitted has been holding me up some because all three of the panel sections will require some cutting … however, it has been necessary to keep the instrument panel sections screwed in place to hold the shape of the upper forward fuselage skin.

My original thought was to place the fuel switch above the AV-50002 ignition & start module and the left landing light switch in the glove box panel to the right of the existing switches in the center panel. However, upon review of “the look” … the left landing light switch would be an orphaned switch because of the spacing necessary to clear the mounting bracket for the panels. So have decided to install it above the ignition module adjacent to the fuel pump switch. A paper cutout was made utilizing the same switch spacing as the ignition A&B switches and there is just enough room for the two additional switches to be placed directly above the ignition switches. This should give the instillation a cohesive look and also provide sufficient room for switch labeling. 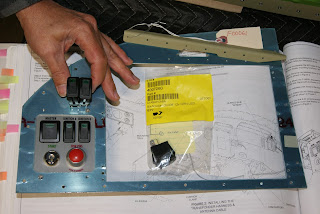 Planned mounting area for the two additional switches spaced the same and directly above the two ignition switches. 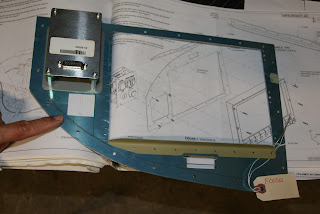 The paper cutout my finger is pointing towards represents the total space taken up by the existing two ignition switches including separation and bezels. As can be seen in the photo, there is enough room to place the two additional switches inline and directly above the ignition switches … this mounting location should create a cohesive look.

While having the F-00060 left instrument panel in hand decided to go ahead and countersink the #40 rivet holes for the nutplates and the F-00061 stiffener. Van’s calls for countersinking ALL of the panel’s mounting holes for flush #6 screws … however, I’m opting to change the look a bit and will either go with stainless Allen cap head screws or Torx pan head screws. 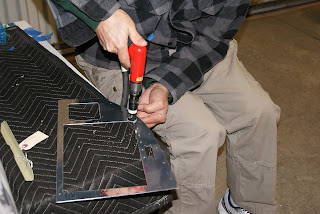 The plan is to get the instrument panel pieces powder coated so decided to have all the rivets in place prior to powder coating. The six nutplates and F-00061 stiffener were riveted onto the F-00060 left panel. 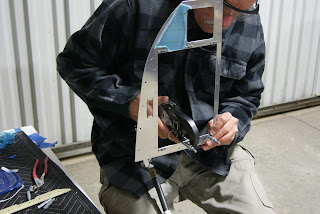 Riveting one of the six nutplates onto the F-00060 left instrument panel section. 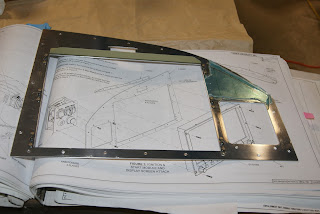 Completed riveting of the nutplates and F-00061 stiffener onto the F-00060 left instrument panel section.