The last few days had been a mixed bag of tasks at DOG Aviation … most of which not worth mentioning. Yesterday, with the help of Mike the canopy was lifted on and off the fuselage a few times as the canopy fairing lay-up over the canopy arms was slowly sanded down until the canopy could be opened fully without hitting the upper forward fuselage skin.  One area of concern was noted … as the canopy began opening further, the bottom forward edge of the canopy lay-up began to interfering with the edge of the side skin and longeron on both sides of the fuselage because of the angle of movement. Have decided to just radius the forward lower edge of the canopy lay-up on the canopy arms much the same as the top of the arms until the interference is cleared. Will likely begin the process of tweaking that later today.

Another item I wanted to get prepped for a top coat of paint is the frame for the oil cooler. The FF-1212 oil cooler frame receives dimples on the inside edge where it attached onto the FF-1214 oil cooler faceplate. The FF-1214 receives the most attention because the #40 rivet holes are to be machine countersunk on the forward surface and there the FF-1212 oil cooker frame mates in the inside edge of the faceplate. 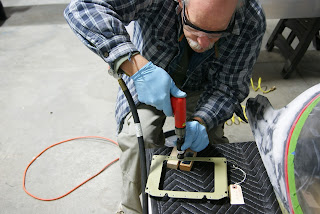 After the necessary countersinks and dimples were made, the two pieces were riveted together … the nutplate rivet holes are to be left open at this time. 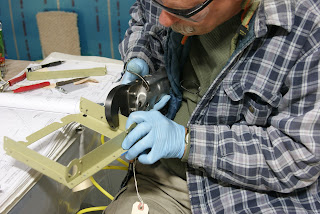 Now the parts are ready to be top coated with POR 15 white engine enamel ... if it stops raining long enough this afternoon to have a quick paint session for the small handful of firewall forward parts remaining to paint.
Posted by John at 8:36 AM