Yesterday, Mike and I went over to Steffon’s fabrication shop and used the metal brake to bend the dual mounting bracket being created for the oil and fuel pressure sending units. Also bent the new mounting bracket being made for mounting the throttle, choke and cabin heat cables so the center section of the instrument panel can be removed in the future without the need to remove all the cables from the engine compartment … gee, may as well add the parking brake cable as well. A special thanks to Steffon for allowing me to utilize the equipment at his shop to bend the metal. 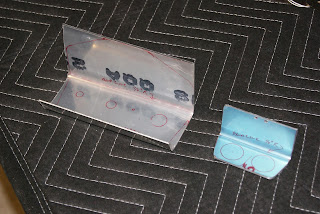 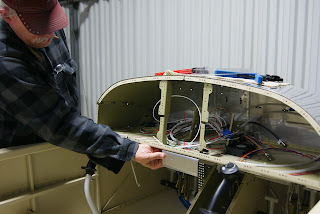 The throttle mounting bracket (which still needs shaping and holes drilled) will mount onto the underside of the instrument panel base. Still undecided about the mounting method, riveting it in place or using screws so it can be removed if desired ... leaning towards screws at the moment.

Upon returning from Steffon’s shop with the newly bent parts, decided to begin trimming and shaping the new dual bracket for the oil and fuel pressure sending units. One issue that needed to be overcome was the extra width of the new dual mounting bracket … it interfered with some rivets on the firewall. Instead of drilling relief holes in the bracket as one builder did, decided to just shape the bracket so it barely clears the rivets. 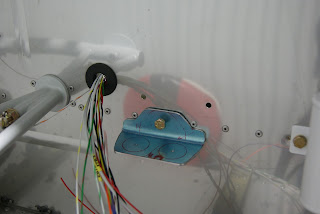 Partially completed bracket now clears the rivets on the firewall. Still needs more shaping on the edges and the two holes for the rubber mounting grommets drilled out to size.

After getting the bracket’s mounting flange to clear the rivets on the firewall, the holes for the rubber mounting grommets were drilled out using three step drill bits. The final size for both holes needs to be 1" to accommodate the rubber grommets both sensors will be mounted onto. 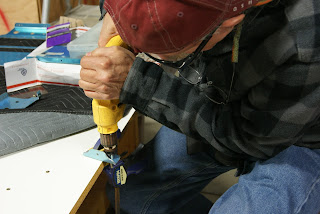 Using a step drill to enlarge the mounting holes for the rubber grommet the two sending units will mount onto.

My largest step drill only goes to 3/4", so on the way home this evening will pick up a larger step drill and bring the hole diameters up to the final size of 1" first thing during the next work session.
Posted by John at 8:02 AM