In addition to adding switches for the fuel pump and left landing light into the left instrument panel, and installing the airspeed indicator into the center panel …. a few more modifications are planned for the DOG Aviation RV-12.

Van’s designs a great airplane to be sure, but there are areas for improvement and the throttle quadrant is one of those areas. One of my dislikes in this area is the fact that all of the cables for the throttle, choke and cabin heat need to be completely removed from the engine compartment in order to remove the center section of the instrument panel. In my opinion, that is just totally daft. Sorry… just had to say it because it is true. Therefore the center panel is receiving some more attention and a plan is being devised that will separate the throttle quadrant from the center panel. 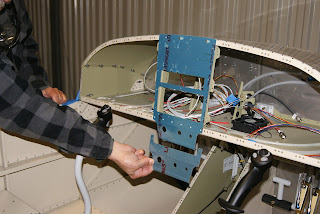 Proof of concept … creating a separate throttle quadrant piece that will mount under the instrument panel base.

While playing with my original idea of slicing the bottom off the center panel, I realized that Van’s had changed the hole diameter and position of the throttle cable hole when they recently began offering the upgraded McFarlane vernier throttle cable. It requires a much larger hole which is positioned lower to accommodate the larger body of the throttle cable and 1 1/4" lock washer … this I discovered while enlarging the hole in the old style center panel I was using as a proof of concept piece. 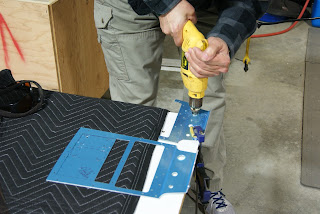 The new center panel is in the foreground. The old panel’s throttle hole is being drilled larger to 3/4" … it is hard to see, but the position of the throttle cable on the new panel in the foreground is lower.

My original thought was to slice off the lower portion of the panel and bend it to 90 degrees on a brake and use some of the existing holes to mount in onto the bottom of the instrument panel base. However, because of the clearance required for the new throttle hardware, I fear the bend would need to start around the first row of holes putting them too close to the edge of the panel to be useful as attachment points, this would only leave the rear row of holes to attach onto the bottom of the instrument panel base. I feel that the weight of an arm on the throttle and the constant pulling and pushing will require more stability, so will be building a replacement piece from scratch with a larger footprint. Measurements made and lines drawn on .063 aluminum to make a separate throttle quadrant piece with a larger footprint to be mounted onto the bottom of the instrument panel. If this piece ends up being a little flexi (which I doubt) a gusset can easily be added between the throttle and choke cable holes.

With the new throttle quadrant drawn up and ready to bend, moved onto another modification that will be made.  There have been issues in the past with the oil pressure sending units going bad with low hours of usage. One school of thought is that because they are mounted directly to the engine, they are receiving too much vibration and breaking down prematurely. Some builders have moved them to the firewall and mounted them using Adel clamps with good success. So the decision has been made to make a bracket for the firewall mounted fuel pressure sending unit that is double wide so the oil pressure sending unit can be mounted at the same location. Both sending units will be mounted in rubber washers on a single bracket mounted to the firewall with two holes in it. 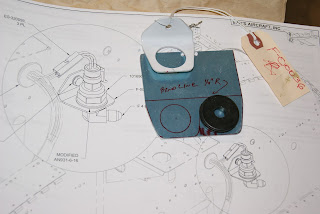 Will be away from the project for a few days but hope to get the pieces bent shaped and drilled by the end of the week.
Posted by John at 10:00 PM