Instillation Of Goodies In The Instrument Bay Begins

In the coming days there will be lots of work activities on both sides of the firewall. Part of this work session was spent amassing part numbers for various screws and hardware that will be needed to complete the RV-12. One such example … the decision was made to not countersink the instrument panel sections because I wanted to move away from the provided Philips screws and use button head socket cap screws in place of the Philips screws with nylon washers to protect the powder coating … think I will like the look better. In some cases, two different head styles were ordered to see which screw head was the most appealing overall. Also decided it would be best to install the backup instruments with all brass mounting hardware in the hopes that the compass will work better with less steel nearby, so an assortment of brass hardware was also ordered.


Not having a whole lot of time left for the work session but wanting to get something meaningful accomplished, some parts were pulled out of the large instrument kit box for instillation in the instrument bay. The first item pulled out of the box for instillation was the Dynon SkyView EMS 220 engine monitoring module. The EMS 220 module mounts on the left side of the firewall using four mounting screws … this module interfaces the information gathered from a host of various sensors in the engine compartment and passes the information on to the SkyView in a format that it can understand and ultimately display on the screen for the pilot to see. 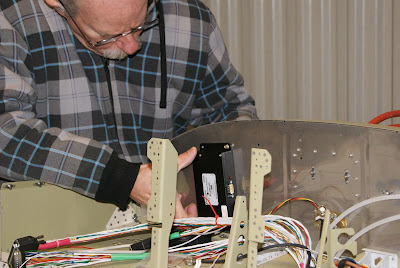 Attaching the Dynon SkyView EMS 220 module onto the instrument bay side of the RV-12’s firewall.


Next item out of the instrument kit box was the Dynon SkyView BAT-320 which is a backup battery pack for the SkyView system. The BAT-320 is designed to supply up to an hour of backup power to the SkyView display and associated modules … which should be enough to get safely to the ground should there be a total electrical failure on the ship’s power bus. The BAT-320 is mounted onto the F-1202B instrument panel base using two screws. 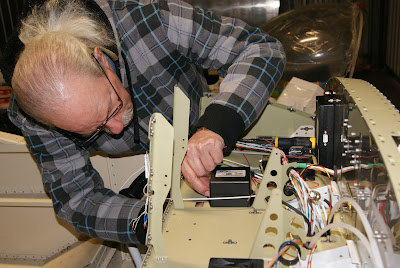 Installing the SkyView BAT-320 backup battery onto the F-1202B instrument panel base.


The last item installed onto the F-1202B instrument panel base for the work session was the Van’s AV-50000A RV-12 control module. The AV-50000A control module acts as hub for the RV-12’s avionics system. Instead of hand wiring the various connectors to each other like the GPS, transponder, radio, intercom, etc., the various sub components of the avionics system plug directly into the color coded connectors on the AV-50000A and the proper interconnects are made within the box between the various connectors. Along with making the necessary interconnects, the AV-50000A also has electronics inside it along with a row of adjustment potentiometers that control audio levels from various devices and sources … it also has the adjustment potentiometer that controls the trim motor’s speed.


To my knowledge there are two versions of the AV-50000A module R1 (mine) and the latest R2 version … the circuit boards inside them ARE different. The newer R2 version supports having a potentiometer mounted on the instrument panel to control the cockpit lighting levels which appears to be the method Van’s is using moving forward . With the older R1 version, the Dynon Skyview controlled the cockpit lighting level for night flights. I’m guessing the change came about when Van’s began offering the Garmin avionics package which, to my knowledge, does not have the feature of directly controlling cockpit lighting.  Moving the lighting photometer to the instrument panel allows lighting control regardless of which avionics package is chosen by the builder. I briefly considered sending my AV-50000A in to have the circuit boards changed out but sanity prevailed, I don’t really plan on flying at night anyway … so it would really be a total waste of funds in my case and the money saved will provide fuel for many many hours of flight time. 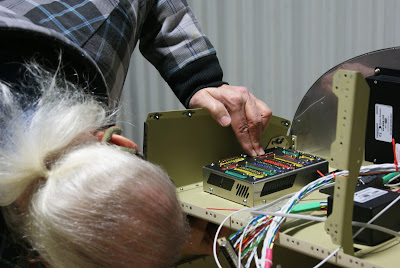 
RV-12 builders should take note … the AV-50000A receives its ground from the mounting screws and should NOT be unscrewed from the instrument panel base when power is applied because the circuit boards can become damaged. Since I now have a grounding block, my plan is to attach a ground wire directly to the AV-50000A using one of the case screws, which should alleviate this issue and make adjusting the potentiometers easier.
Posted by John at 9:23 AM