The WH-00020 wiring harness has a lot going on … in that, it has a multitude of various connectors spreading out from AV-50000A control module. One connector attaches directly to the AV-50000A control module and from there the wiring branches out … there are two connectors going to the Dynon EMS-220, a connector for the backup battery pack, two connectors that will plug into the back of the Dynon SkyView display and a panel mount USB connector. The USB connector will be used by the SkyView for receiving software updates, saving user preferences, data dumps of system parameters (these can be converted into graphs for analysis) and saving SkyView screen shots to name a few. 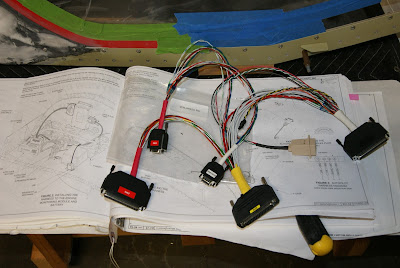 The many tentacles of the WH-00020 wiring harness. 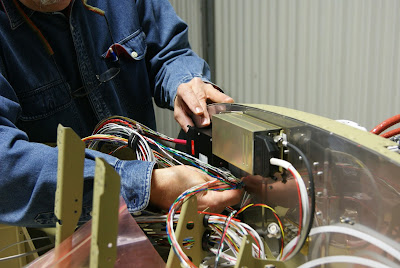 Attaching the second of two connectors on the WH-00020 wire harness that connect to the EMS-220 module.


When attempting to install the panel mount USB connector ran into a small issue in that the connector fit was so tight it would not slide into the slot in the instrument panel base. This was remedied with a few strokes of a jeweler’s file on both the panel base and the connector’s plastic housing. 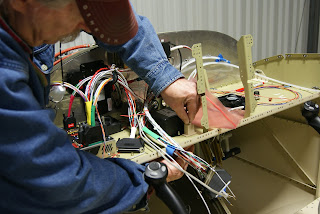 Installing the panel mount USB connector onto the rectangular cutout in the instrument panel base.


At this point in the work session, decided to switch gears and check something that has been on my mind for a very long time … possible interference between the ADS-B receiver and the backup airspeed indicator. Based on the drawings, have known there would likely be an interference issue with the backup airspeed indicator … this is because the ADS-B 470 receiver’s mounting brackets mount the ADS-B module directly above the Garmin GTR 200 radio. When choosing the position for the airspeed indicator a slightly higher mounting position was considered and could have been chosen … which, in all likelihood, probably would have alleviated the close fit. However, for panel symmetry and visual appeal, opted to mount the backup airspeed on the centerline of the AP and knobs panels … doing otherwise would have bugged me FOREVER. Figured if need be, the ADS-B module’s mounting position can be altered or relocated altogether.


So yesterday my curiosity finally got the best of me and time was spent on loosely mounting the Garmin GTR 200 radio’s mounting tray onto the instrument stack angles and com support brackets along with attaching the mounting brackets for the Dynon ADS-B 470 receiver. 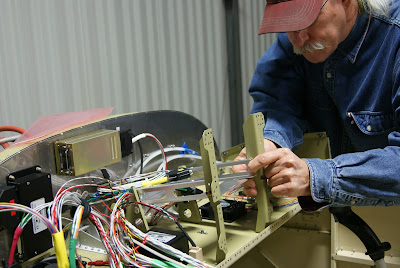 
After the Garmin GTR 200 mounting tray was positioned, the mounting brackets for the Dynon ADS-B 470 were set in place … each of the ADS-B mounting brackets share two mounting holes with the Garmin GTR 200's mounting tray. With the Dynon ADS-B 470 receiver placed on the brackets and clamped in place, the backup airspeed indicator was held in its approximate position and although the airspeed indicator’s body barely clears the case of the ADS-B module there may be an interference issue when the pitot and static air fittings are installed. Because the instrument panel pieces are not back from the powder coater yet, getting an exact fit is not possible at the moment … but it appears there likely will be some tweaking necessary. 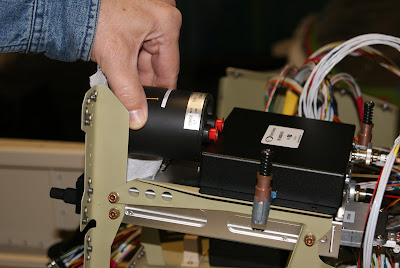 It appears to be a fit that is too close to call without the instrument panel to set the exact position of the airspeed indicator. But by all indications, the tubing fittings that need to be screwed into the back of the instrument may create an interference issue.


Quite a bit of time was spent on figuring out ways to create more room without totally relocating the unit. It is hard to see in the above photo but the ADS-B module could be slid forward up to about an inch before the antenna connector would begin interfering with the transponder case (which is barely out of view) so that is one possibility that would likely work if just a small amount of clearance is needed. Another thought that I kicked around was to mount the ADS-B module upside down which would instantly gain 5/8" of clearance as can be seen in the photo below. 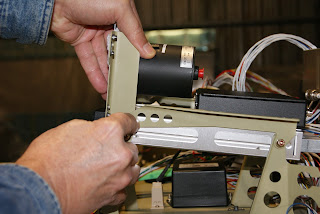 Mounting the ADS-B module upside down would require making some standoffs … but as can be seen in this photo, it would create approximately 5/8" of clearance … creating more than enough room for the two fittings on the back of the airspeed indicator. The Dynon instillation manual says the ADS-B module can be mounted in ANY convenient location … so an inverted mounting should not be an issue.


The verdict is still out until the instrument panel pieces return from powder coating enabling the airspeed indicator to be mounted so exact measurements can be made. If a tiny amount of clearance is needed, will likely just slide the ADS-B module a little forward by slotting or drilling new mounting holes. If a significant amount of clearance is needed, mounting the ADS-B module upside down and making standoffs to keep the unit barely off the radio’s mounting tray appears to be a viable option. Fortunately, mounting options are available without needing to completely relocate the ADS-B module.
Posted by John at 7:51 AM