Yesterday, the lower cowling was removed after letting the Epoxy resin cure for two days. The air duct and duct interface appear to be solidly bonded onto the lower cowl. There are a couple of spots that I will add a little more cloth to because one spot in a corner behind the duct interface has a small gap that air can get through and another location has an air bubble which is not to my liking, so will put down one more layer of glass over that spot. 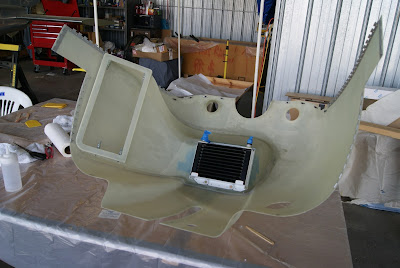 Completed bonding of the air duct and duct interface to the lower cowl.


There is still a little more work necessary on the lower cowl before it is totally completed. All the Cleco holes still need to be filled with a flox mixture, so will do that when I tweak the previously mentioned spots. In addition, there is a round gasket (looks like a round door seal gasket) that will be glued onto the perimeter of the duct interface using high temperature silicone. The gasket will create the air seal between the duct interface and the frame around the radiator. The last step is installing a protective foil heat shield in the high heat areas near the muffler and exhaust pipes.
Posted by John at 6:52 AM