Today the bonding of the air duct and duct interface to the lower cowling was completed without any issues … well for the most part. Photos of the process were not taken because there was just not enough time to spare … plus a camera should be nowhere near Epoxy resin.


Fortunately, Bernie was available to give me a hand with the job for which I’m grateful because we needed to move fast. Bernie was only available during the afternoon and by then, the temperatures were well into the 80’s … which, for those who have used Epoxy resins already know, means the Epoxy sets up rapidly after getting mixed … especially when in large batches due to an anomaly called exotherm.


Prior to mixing the Epoxy resin, we read through the procedure a few times and did a dry run so we had the entire procedure fresh in our minds. The cloth pieces for the three layup locations were precut to the appropriate lengths and all the mating surfaces were wiped with Acetone and Isopropyl alcohol (not at the same time).


The first step is to brush on a thin coating of Epoxy resin onto all the surfaces that will be mated or receive layups. Next a large batch of Epoxy resin is mixed with cotton flox until the mixture thickens to the point it will not pour out of the mixing cup. The flox mixture is to be placed in a Ziploc bag and the corner of the bag cut so the flox mixture can be applied like icing on a cake using the Ziploc bag like a pastry bag. This is where we had some issues in that the first bag got a hole in it while being wiped off … the second bag ripped when being twisted to move the flox mixture out of the bag. I’m not sure what brand of bags was being used, but fortunately I had three. My suggestion to other builders … don’t use the thin sandwich Ziploc type bags, instead, use the heaver freezer bags. My hands were getting plenty warm from the Epoxy resin kicking off so do not know if that also contributed to the bags breaking so easily.


The only deviation made from the instructions involved applying the flox mixture onto the lower cowl instead of on the flange edges of the air duct that mate with the lower cowl. There was a well-defined area where the pieces will mate … so felt this way was much easier because the air duct could be lowered directly in place while Bernie spread the lower cowling a little. After all the parts were in place Clecos were installed to hold all the pieces together. The three areas that receive cloth layups were quickly knocked out.


When the Epoxy work is completed, the lower cowl is to be installed onto the fuselage along with the upper cowling using screws in every hole and all the hinge pins. This way the Epoxy resin will cure in the exact position the lower cowling needs to be in when totally secured. 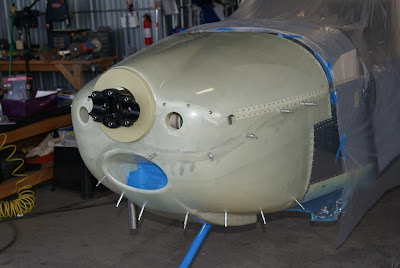 Both the upper and lower cowls are placed in position using all the necessary mounting hardware so the cowls are in their natural position as the Epoxy resin cures. 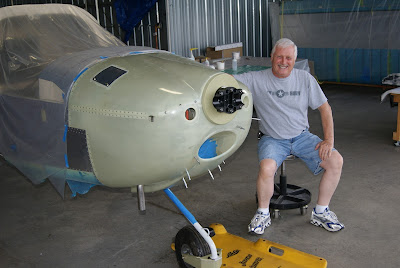 
It would have been nice if we could have been slightly neater and not had as many dribbles as we did, but as it was we just barely had enough time to finish as each batch of Epoxy was rapidly kicking off in the hot hangar.
Posted by John at 9:49 PM