Preparing The Spinner For Instillation 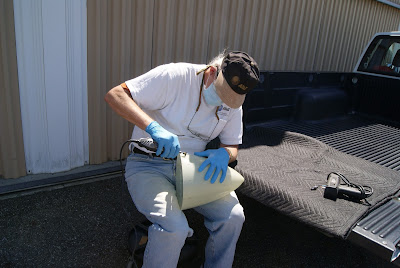 Cutting around the circumference of the spinner using a Dremel tool outfitted with a cutting wheel.


Next step involves cutting out slots for the propeller blades. Here is where care needs to be taken because the fiberglass material removed will be used later ... so Van’s suggests using a fine toothed hack saw to make the cuts up the sides to where the curve begins. I elected to use a hand held hack saw and had great results staying right on the edge of the cut lines. The curved portion of the cutout is not used, so step a drill can be used to make a grouping of holes. 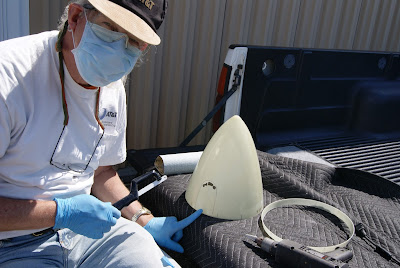 The area my finger is pointing towards needs to be removed as one piece. Prior to making the side cuts with the hacksaw blade in my hand, a few #30 holes were drilled as lead holes for a step drill which was used to make connecting holes in the area of the curve.


The hacksaw was used to carefully cut the sides of the slots in the fiberglass material up to where the curve begins so the fiberglass can be removed as a whole piece which will be used later. A sanding block and a bottle were used to sand the edges of the curve to the scribe lines. 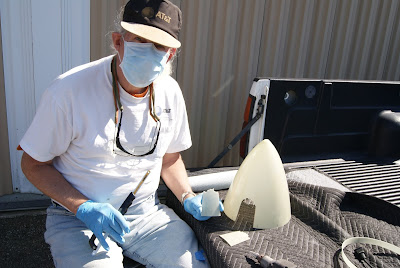 After making the cuts with the hand hacksaw, the two pieces like the one I’m holding in my hand need to be saved because they will be reused. later. 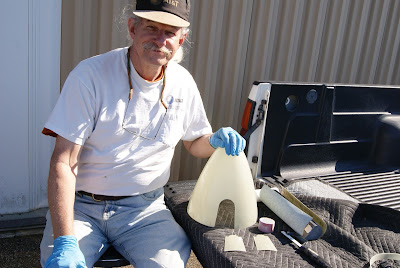 Finished spinner … both propeller cutouts have been sanded smooth to the scribe lines.
Posted by John at 10:04 PM