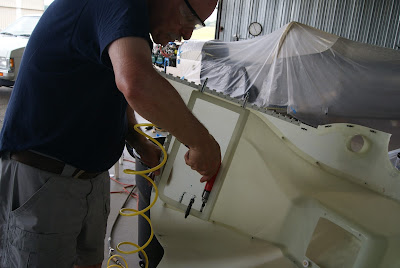 After clamping the lower flange in position as dictated by the previously drawn pencil line a second hole was drilled in the bottom flange of the duct interface. 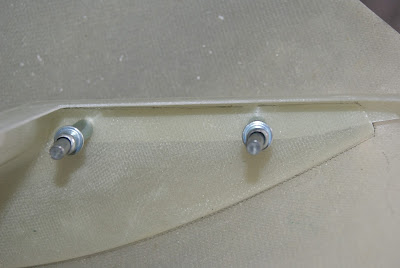 One can see the pencil line that was drawn when the cowl was on the fuselage. Having this line insured the duct interface was positioned correctly prior to drilling the second hole with the cowl off the fuselage.


Having the Cleco holes in the duct interface drilled, the lower cowl is removed so lines can be drawn where the flanges on the air duct meet with the lower cowl.  After the lines are drawn, the air duct and duct interface are removed for sanding. To insure a good epoxy resin bonding, 100 grit sandpaper is used to scuff up the areas that will be bonded or receive fiberglass cloth. I actually used 120 grit because it was handy and gave all the surfaces a good scuffing in multiple directions. 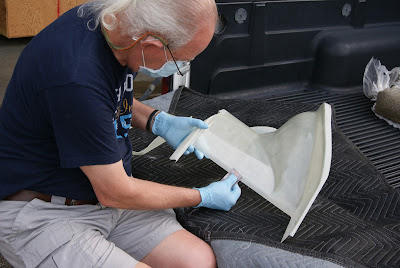 Scuffing up the air duct with 120 grit sandpaper. 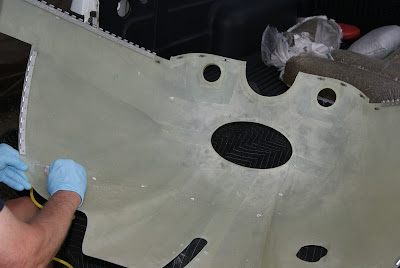 Sanding the cowling where the bottom flange of the air duct will sit. Looking closely at the photo one can see the faint pencil marks that trace where the layups or bonding will take place. 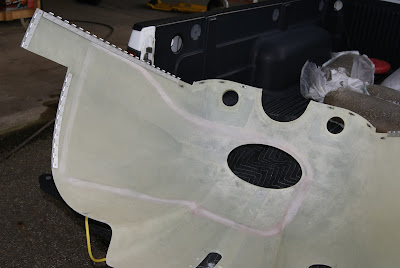 Sanding of the lower cowl completed at the areas where the bonding or layups will occur.


Now that the pieces have been sanded, tomorrow will be the day for the bonding the pieces together making the air duct, duct interface and lower cowl as one. Prior to applying the Epoxy resin, the surfaces will receive a good cleaning with Acetone.
Posted by John at 10:02 PM