Installation Of The Oil Lines Completed

Yesterday, completed the installation of the oil lines which connect the oil tank, oil cooler and engine together. The first line in the instructions informs the builder it will be necessary to remove the lower exhaust flange nut on the #1 cylinder to install the FF-1221 hose bracket for an Adel clamp. This is the kind stuff that drives me nuts … the exhaust system was just installed in the previous section of the plans … there is no reason that the builder couldn’t have been instructed to install the FF-1221 hose bracket at that time. But no … now the exhaust flange nut has to be removed, bracket added, proper torque value looked up, appropriate crows foot wrench found and of course dig out the torque wrench so the nut can be torqued down again on the exhaust flange. Fellow builders reading this should consider installing the FF-1221 hose bracket onto the lower stud of the #1 cylinder’s exhaust flange while installing the exhaust system … it will be a time saver. Fishing the VA-213 oil supply hose down behind the engine mount and under the engine to the general area where the oil cooler will reside. 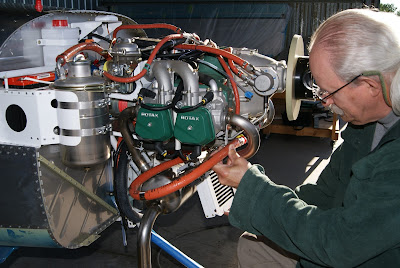 Checking the positioning of the oil cooler with the VA-214 hose more or less in position. 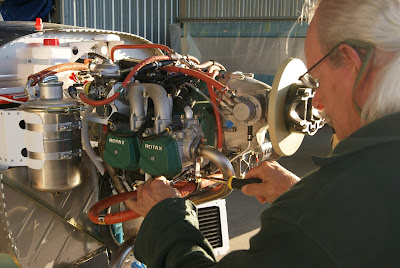 Installing the Adel clamp onto the FF-1221 bracket that will support the VA-214 oil cooler hose.


The final hose to be installed is the VA-215 oil return hose which connects the oil return nipple on the bottom of the engine to the in port on the oil tank. (For the time being the fittings for this hose are not going to be tightened because this hose needs to be removed from the oil tank during the purging process. Typically, the fitting on the bottom of the engine is tightened at this point but am thinking for the purging process it will be far easier to hook up a vinyl hose to the oil return nipple and capture the oil in a container set on the floor as opposed to trying to capture the oil coming out of the VA-215 hose where it had been disconnected from the oil tank). The routing of both the VA-215 and VA-213 hoses is somewhat critical in that there really is not any excess hose to play with … they are just long enough to do the job. One concern is to make sure there will be clearance between the air filter and the VA-215 oil return hose which loops over the air filter. The air filter was temporarily set in position to verify the VA-215 hose would clear … fortunately it did.


A test fit was made with the lower cowling in place and the hose fittings on the oil cooler lose. By reaching down and in from the right side, the oil cooler is lifted up and set onto the guides so it drops into position. At this point I reached in with a wrench and snugged the right fitting so it would stay in place when the cowl is removed to torque the fittings to 18.8 foot pounds which is the value recommended for the AN8 fittings on the oil tank in the Rotax instillation manual, so will use that value throughout for the rest of the fittings. 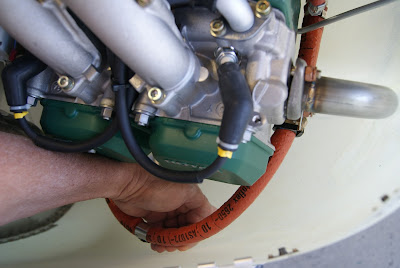 With the lower cowl in place and the VA-214 fitting clocked aft on the oil cooler, my fingertips could be placed between the cowl and the hose. This is OK, but when the cowl comes off the plan is to clock the fitting just a little more to improve this clearance.


After the VA-213 and VA-215 hoses are in place, a couple of wire ties need to be installed … one on the aft of the engine towards the left side where the two oil lines pass close to each other and another near the air cleaner for the right carburetor which will pull the VA-213 oil line away from the coolant bottle seen in the photo below. 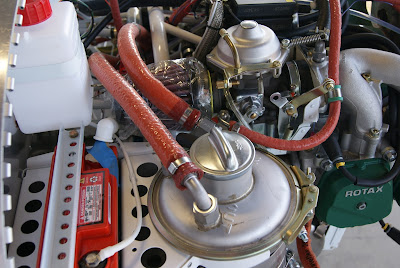 The VA-213 and VA-215 oil lines installed on the oil tank. I was concerned about the clearance around the air cleaner … there is clearance, but not an overabundance. Still need to install the wire tie to cinch the two lines together and pull the VA-213 oil line away from the coolant bottle. 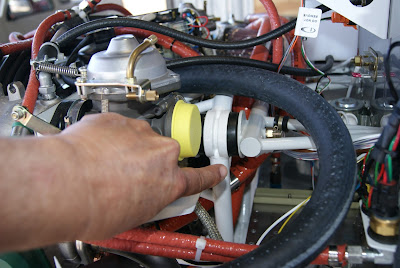 The second place that requires a wire tie is in the area my finger is pointing towards at the location where the VA-213 passes next to the VA-215 just a little above the metal identification tag (which should be moved a little lower). 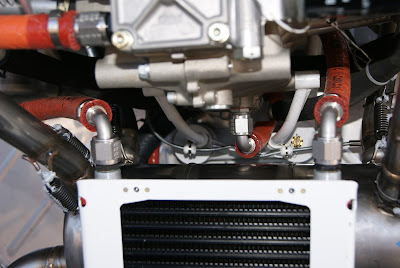 The return oil fitting on the bottom of the engine and the oil cooler connections. The fitting on the left side of the photo will be clocked just a little more aft to improve the clearance between the lower cowl and the VA-214 oil hose.


Return from the future: After removing the lower cowl to tighten the fittings on the oil cooler decided to clock the fitting for the VA-214 hose a little more aft to obtain just a little more clearance than finger tips between the hose and the right side lower cowling. As can be seen in the photo below, there is now room between the cowling and hose for a 3/8" socket to easily pass by. 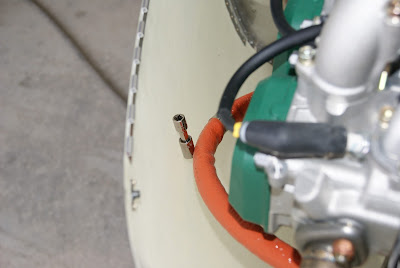