Yesterday’s work session at the hangar was a mixed bag of a bunch of small events knocking out small items … such as installing the cables for the shoulder harnesses, adjusting the stabilator cable tension and installing the split baggage bulkhead modification. The shoulder harness cables were a snap to install and after that Bernie was called to see if he could give me a hand with adjusting the stabilator cables. The stabilator cable tension is to be adjusted to between 35 and 45 pounds on a 70 degree day and that is just what we had, so decided it was the appropriate time to knock out this task. This can be done alone, but the first step which involves adjusting the upper stabilator cable’s slack to the point that the trailing edge of the stabilator just begins to move at about the same point the control stick begins to come off its stop is easier if there is a helper.


While I adjusted the slack out of the upper cable, Bernie was keeping an eye on the control stick’s stop for movement and I kept adjusting until we found the sweet spot where the trailing edge of the stabilator was down on the stops and any movement of the control stick off its stop would begin to move the stabilator off its stop. Had I not had Bernie’s assistance, I would have been crawling in and out from under the fuselage quite a bit … thanks Bernie. When the upper cable is adjusted as above, the slack is removed from the lower cable and the seat ramp now needs to be screwed down. Apparently, there is enough tension on the cables that without the seat ramp screwed down, the metal will flex enough to affect the true reading of the cable’s tension.


50 screws later, with the seat ramp screwed down, a piece of wood is used to traverse the cockpit and is clamped to the canopy deck so the control stick can be clamped approximately 10 inches aft of the instrument panel. With the control stick secured 10 inches aft of the control panel, the barrel adjusters on the cables are adjusted so the cable tension of each cable is between 35 and 45 pounds. A Burroughs tensiometer purchased last fall was used to make the measurements. 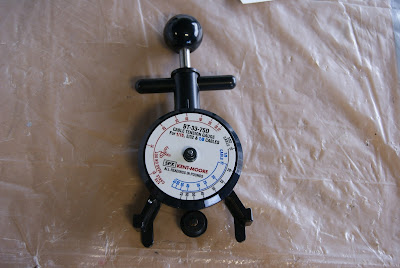 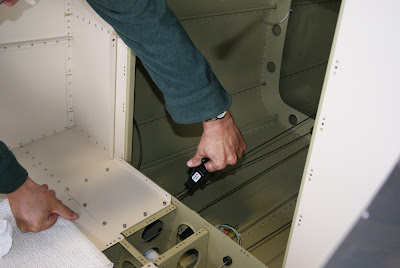 The tensiometer is clipped over each stabilator cable aft of the baggage bulkhead to read the cable’s tension by flexing it and showing the result on a dial indicator. The acceptable range on a 70 degree day is 35-45 pounds.


After the tension is set correctly, the clamp is removed from the control stick and a verification is made to insure when the control stick is moved fore and aft, the stabilator hits its stops in both directions of travel before the stick hits its stops. Fortunately, did not have to mess any further because the stabilator hit its stops in both directions prior to the stick hitting its stops … time to move on.


Because installation of the fuel tank is right around the corner, figured it is time to finish off this two year old modification … no point in rushing things right? To complete the bulkhead modification a bunch of nutplates needed to be riveted onto three angles that have been previously cut, drilled, deburred and painted. One angle attaches to a baggage rib and the other two angles attach onto the cutout from the baggage bulkhead’s access cover. 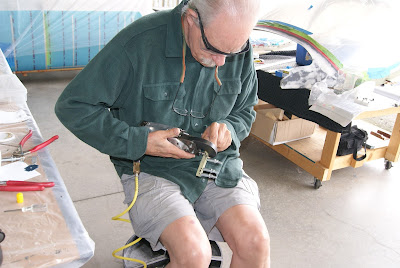 Riveting nutplates on an angle that will be riveted onto the aft portion of the baggage rib to the right of the center tunnel. 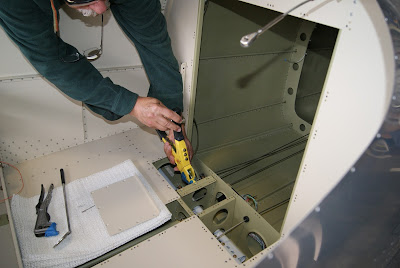 Riveting the modification rib onto the baggage rib to the right of the center tunnel. This angle will allow the baggage floor access cover to be split. The panel in the photo will cover the location where I’m riveting and the fuel tank will sit above it. 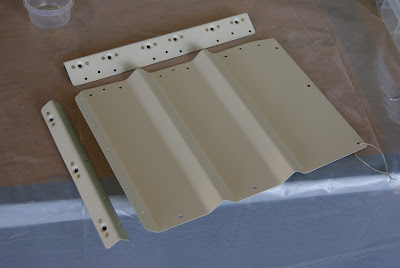 The cut-away section of the baggage bulkhead access panel and the angles that will be riveted onto it. 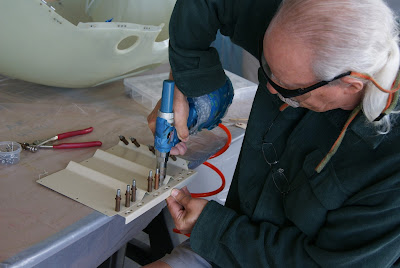 Riveting the angles onto the cut-away section of the baggage bulkhead access cover. With all the riveting completed for the modification, the panels were set in place and screws were installed. 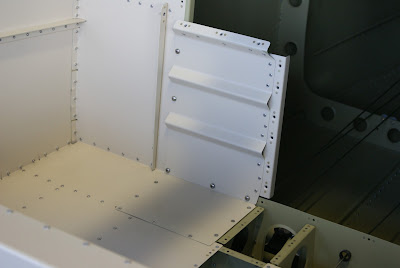 Completed baggage bulkhead modification.
Posted by John at 6:19 AM