Yesterday’s work session became a day of resolving issues. Now that the bonding of the air duct to the lower cowl is completed, the cowlings have been removed to continue with the instillation of the cabin heat control cable … which, by all rights, should be an easy task, but ended up being far from that. The cabin heat Bowden cable instillation was suspended at the step where the comb is installed … the comb is now painted, so it was installed on the Bowden cable and the last remaining pair of Adel clamps were tightened. 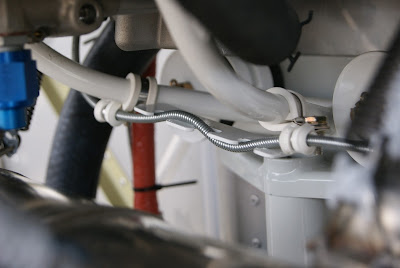 The comb is now installed on the cabin heat Bowden cable. The comb will add just enough friction to counter the effects of air pressure on the cooler door so the cable will not creep.


With the cabin heat cable in place and secured with Adel clamps, the next step in the plans involves cutting off the excess cable. Following Van’s instructions for cutting the length of the Bowden cable that controls the cabin heat cooler door led to an issue that took a little creativity to overcome. With the Bowden cable installed along the bottom of the engine mounts, the plans call for removing the center cable and cutting the Bowden cable’s outer housing at a point 2 27/32" from the Adel clamp closest to the cooler box. 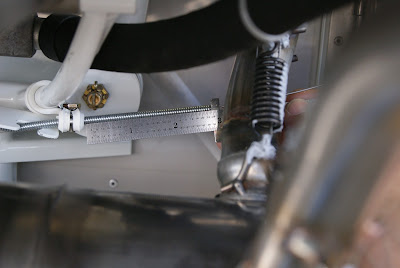 Following Van’s plans, as one can see, the cable housing was cut to 2 27/32" from the Adel clamp.


The design is overly simplistic (in fact, too simplistic) … basically, the FF-1210 cable end is a hollow rod with threads at one end and a hole for a cotter pin drilled through the tube that captures a loop placed on the center cable. A rod end is then screwed all the way into the tube and wedges the center cable into the cotter pin thus locking the center cable. Even though the rod end is threaded, it is not used to make fine adjustments because it needs to be screwed all the way down to compress the center cable into the cotter pin. As the cabin heat knob is pulled the FF-1210 cable end slides up the Bowden cable pulling the cooler door open as it moves. Below is a photo that shows the parts and the drawing. 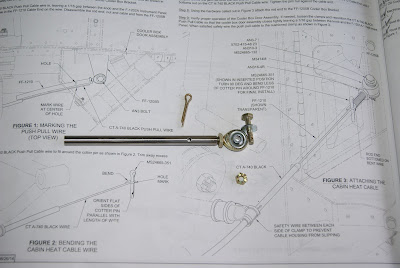 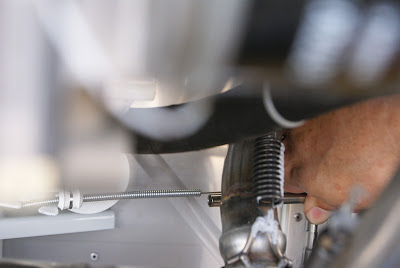 The outer housing of the Bowden cable should already be barely inside the FF-1210 cable end when the cooled door is fully closed. As one can clearly see, that is not the case.


What to do … what to do? I finally came up with an idea that worked remarkably well and has the added benefit of allowing the rod end to be adjustable. I measured the gap between the end of the cable’s outer housing and the FF-1210 cable end and added a little extra and purchased a set screw that was about that dimension, which was 5/16". The set screw was screwed into the FF-1210 cable end and used to secure the inner cable to the cotter pin …doing this allowed the rod end to be adjusted so the cooler door closed then the cabin heat knob in the cockpit is pushed in. 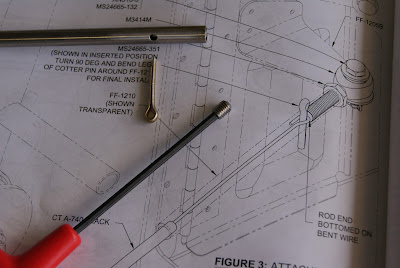 Parts prior to assembly … everything is the same except the set screw will be threaded into the FF-1210 cable end to secure the center cable to the cotter pin. This will allow the rod end to be adjustable to keep the cooler door closed when the cabin heat knob in the cockpit is pushed all the way in. 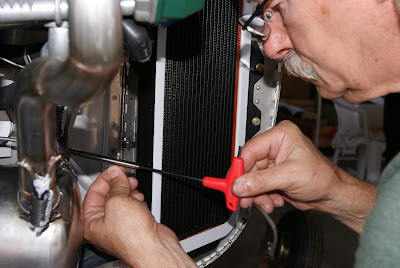 Installing the set screw that will push the Bowden cable’s center cable tightly against the cotter pin locking it in place. 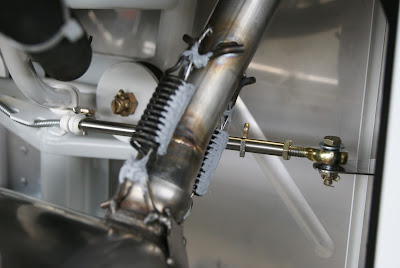 
With the cabin heat cable issue resolved, attention was turned to my other pressing issue … making the support for the coolant hose. Frequent readers of the DOG Aviation blog may recall it was discovered a threaded hole was missing in the nose gear weldment and a plan was devised and sent to Van’s for evaluation and subsequently approved by Van’s to use a hose clamp with a hole drilled in it so a washer head screw could be welded onto the inside of the clamp leaving a threaded stud protruding for attaching the Adel clamp which will support the coolant hose.


Have not taken any photos yet, but have amassed all the items necessary and did a mock instillation of the hose clamp to mark a good location to drill the #12 hole in the clamp. The hole was drilled so will take the hose clamp and an AN525 washer head screw to a welder today so the screw can be welded onto the hose clamp.
Posted by John at 6:00 AM