The decision has been made to take the road less traveled and build the RV-12 as an EAB (Experimental Amateur Built) airplane as opposed to an E-LSA (Experimental Light Sport Aircraft). All that will be a topic for another post in the near future.

From the beginning there has been a desire to build the RV-12 using flush rivets as opposed to using the low profile rivets that come with the kit. Why? Mostly aesthetics … plus the ease of cleaning a smooth surface as opposed to a surface with thousands of bumps on it. Originally, there was hope of using solid rivets on all the skyward facing flight surfaces. However, that poses unique challenges because the materials used in all aluminum LSA’s is a rather thin .020 inch for skin and ribs typically. The RV-12 is no exception and the thinness of the materials is not conducive to riveting 1/8” solid rivets the conventional way (rivet gun and a bucking bar). That said, back riveting appears to be a viable option and I seriously looked into it. Unfortunately, even that option has compromises … as an example, the RV-12 stabilator utilizes an enclosed box spar which is assembled prior the skin being installed. There would be no way to back rivet the skin to spar rivets, thus necessitating using blind (pop) rivets at those locations. The results would be a hodge-podge of solid and countersunk blind rivets … functional and airworthy to be sure, but tough on the eyes.

Using solid rivets on the wings would pose an even greater challenge because the bottom skins are designed to go on first … they also wrap around forming the leading edge and continue back about a foot. In order to back rivet the wings, one would have to deal with keeping those large skins suspended overhead to allow access, plus build a solid gig that would have to be moved to each rivet to be back riveted without interfering with the Clecos holding the skins to the ribs. I still feel that it is doable, but it would be a daunting task for a single builder … and quite frankly, a daunting task for two builders. I feel the time involved would be immense and offer really no advantage to justify the time involved.

In light of the above issues and taking into consideration DOG Aviation has a staff of one, a compromise has been decided. Moving forward all rivets that make up the outer surfaces of the airplane will be countersunk blind rivets. 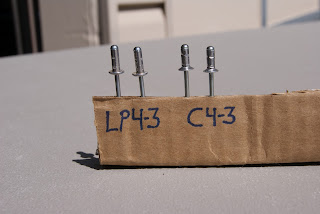 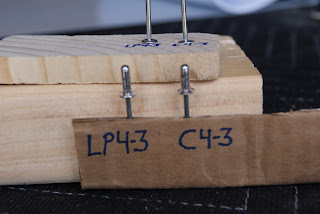 By clicking on the photo to enlarge it one can easily see how the countersunk
on the right sits flush as opposed to the low profile rivet on the left. 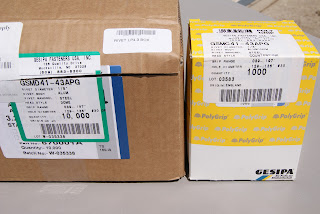 The LP-4 rivets Van’s uses are manufactured by Gesipa as one can clearly see on the left hand box. The Gesipa part number for what Van’s calls the LP-4 rivet is GSMD41-43APG. The D in the part number denotes a Dome or low profile rivet. The box on the right contains the countersunk or flush rivets I will be using on the RV-12 build. They are also manufactured by Gesipa and according to Gesipa, the countersunk version has the exact same specifications for shear and tensile strengths as well as the same grip range as the LP-4 rivets Van’s supplies. The Gespia part number for the countersunk version is GSMC41-43APG. As one can clearly see, the part numbers are identical except the D that denotes dome (low profile) is replaced with a C that denotes countersunk.
Posted by John at 6:29 PM