Originally an inexpensive Harbor Freight spray gun was purchased to spray the primer … but then I figured gee, after priming hundreds of square feet of aluminum during the build, I may just get good enough at spraying to want to try tackling spraying the outer finish coat as well. (Plus the tip that came with the HF spray gun is larger than the tip size recommended by the primer manufacturer and various sized tips are not available at my local HF store).  That said, the DOG Aviation procurement department went into action and found a seemingly great little HVLP gun that has a lot going for it. 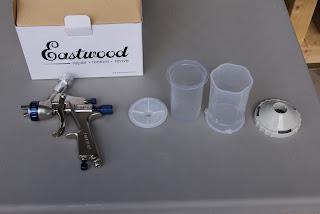 Eastwood’s  Concours HVLP spray gun and the DeKups disposable spray system made by DeBliss. A special adapter is screwed on the gun to accept the DeKups system. The spray gun has four different sizes of tips available and the gun only uses 4 CFM of compressed air, so most any home air compressor will work well. Also the DeKups system is made in at least three sizes ... my initial choice is the 9 oz cup because most of the priming will be done in small batches.