Yesterday afternoon was spent analyzing the best (or if not best, easiest) approach to resolve the interference issue between the backup airspeed indicator and the Dynon SkyView ADS-B module. Because the ADS-B module almost fit to begin with, rather than flipping it upside down and fabricating new mount or making a flat mounting plate that would allow the module to be offset, decided to make the attempt to lower the ADS-B module by cutting slots in the F-00045B ADS-B mounting brackets.


Because of the way the brackets were made, instead of making a vertical slot it was necessary to make the slots on an angle to keep the hole to edge distance acceptable. A Dremel tool outfitted with a cutter bit was utilized to freehand the slots. In addition to cutting the slots for the mounting screws, it was also necessary to relieve the forward end of the F-00045B brackets so they would clear the top of the F-00057 com support brackets. The right bracket was done first to see if it would work out …. as can be seen in the photo below it worked. 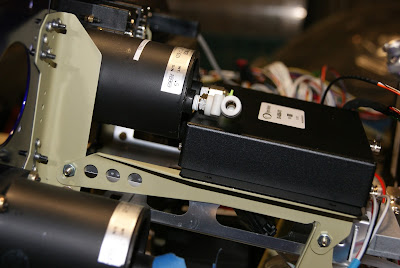 The right bracket was slotted as a proof of concept to see if the ADS_B module would fit under the fittings for the backup airspeed indicator …. as can be seen, slotting the bracket worked. The area that needed relieved was just to the left of the right mounting nut the bracket still touches a little so a black pen mark can be seen where more material needs to be removed.


Now knowing that the modification of the brackets would work, the left bracket was slotted as well. A keen eye on the photo below will reveal the right bracket was slotted deeper than the left this is because the airspeed indicator is on the right side of the instrument panel section so it needed a little deeper slotting to achieve the desired clearance. 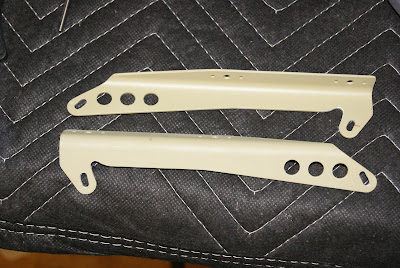 Both the right and left F-00045B ADS-B mounting brackets after slotting.


After the brackets were slotted, the rivet holes for the nutplates were countersunk and the nutplates riveted in pace. By lowering the brackets I did create a minor issue ... in that the two mounting screws for the left side of the ADS-B module will need to be shortened a little because there is only about 1/8" of clearance between the nutplate and the frame for the Garmin GTR 200 radio. 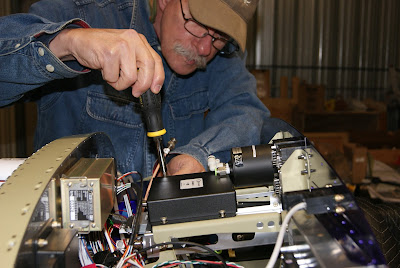 Installing the ADS-B module … the two mounting screws sticking up will need to be shortened a little to clear the mounting frame for the Garmin GTR 200 radio.
Posted by John at 6:04 AM