Friday work on the upper and lower cowling halves began by preparing the cowling pieces for trimming. Van’s plans calls for trimming the upper and lower cowling pieces to within 1/8" of a trim line that has been scribed into the pieces then hand sand the pieces down to the trim line. The scribed trim line on the upper cowling was easy to see and mark using a mechanical pencil with a fine lead to fill in the scribe line so it was well defined. That was another story on the bottom cowl … there were places where the scribe line could not be easily seen, especially inside the hangar, or felt since it is typically a score. The only way to make out the trim line was to have the cowling outside and angle it in such a way the faint “line” would become visible so it could be marked. This was a real pain in the keister. 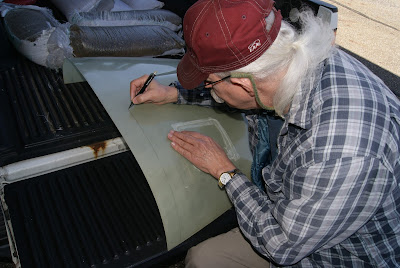 Using a pencil to highlight and darken the cut line on the upper cowling half. 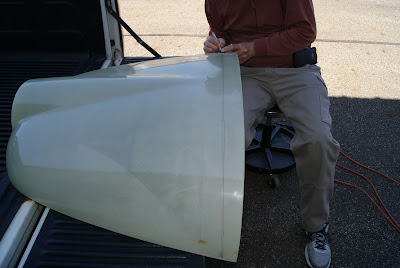 Marking the cut line 1/8" away from the trim line using a red Sharpie pen.


Was about to begin cutting the cowlings when Mike and Bernie rolled up towing a trailer with a John Deere lawn tractor in it.  It had an interesting problem in that once started, it would not shut off by turning the key to the off position. That seemed like more fun at the moment than getting all itchy cutting fiberglass, so for the remainder of the afternoon and evening we were trying to figure out the ignition issue with Mike’s tractor. At one point, seemingly everyone around the airport ended up at Mike’s hangar trying to isolate the cause of the issue. We ran out of time, but isolated the problem to one of two items after finding a wiring schematic on the Internet. All that is left to do is remove a wire from a connector to truly isolate the issue.


Saturday turned out to be a nice day and was spent outside slicing and dicing the cowling halves. A Dremel tool outfitted with a cutting wheel was used to cut the excess material off both cowling halves to a 1/8" away from the trim line as per the plans. The lower cowling receives some extra attention in that there is a joggle and a flange that the upper cowling needs to fit over. The plans call for cutting the flange on the lower cowling down to a length of 5/8" and to sand the joggle so there is no extra material in the joggle or on the flange to prevent the upper cowling from seating tightly to the lower cowling when mated. A round hole for the gascolator needed to be drilled into the cowling … (think it ends up being 1 1/16") I used two step drills which easily did the job. 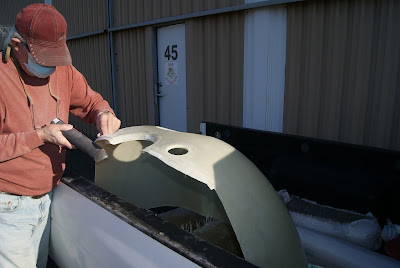 Smoothing the edge of the flange on the lower cowling half using a sanding block after cutting off the excess material so the finished length of the flange is 5/8" from the joggle. The flange closest to the viewer has not been sanded yet.