After doing a little fine tuning of the joggle on the lower cowling, as per the plans the lower and upper cowling halves were mated and clamped so two #40 holes could be drilled. This was accomplished by using a piece of wood for the lower cowling to sit on so the long tabs would stay flat to the floor and aligning the side edges of the two cowling halves so they could be held together with duct tape. After the two halves are clamped together, measurements are laid out for 6 screw holes … three on the front surface of the cowlings on either side of the hole for the propeller flange. HOWEVER, only the two inboard screw holes on either side of the center prop flange hole are drilled to #40 and Clecoed at this time … the remaining four holes will be drilled much later. 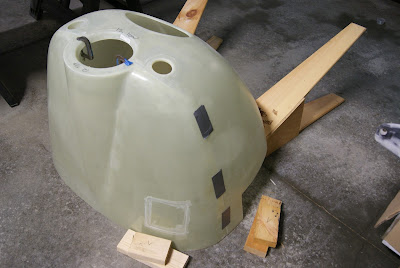 After securing the two cowling halves together with duct tape and clamps, as cab be seen in the photo, measurements are to be made for three screw holes on either side of the center prop flange hole. 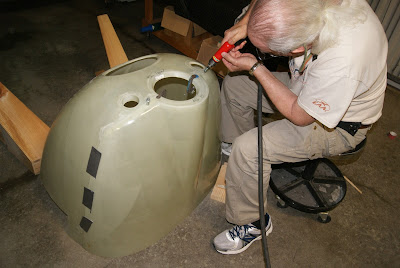 For now, only the two screw holes closest to the prop flange hole are to be drilled. The first hole has been drilled and Clecoed and the second hole is being drilled to #40.


Moving on, the next step is to cut out the slot for the nose wheel gear leg. The Dremel was outfitted with a cutting wheel and used to make the rough cuts followed by hand sanding down to the scribe lines.


After the rough cuts were made for the slot but prior to separating the two cowling halves, Bernie and Mike were available to help me do a test fitting while both cowling halves were still held together with Clecos and duct tape. As expected, the cowling touched the spinner back plate because the cowling halves are still 1/8" too long since the aft edges have not yet been sanded to the scribe lines. If taken to the scribe lines all the way around, the cowling appears it may be skewed slightly left of center … by having a little extra material to work with, the hope is to improve on that a little when the lower cowling half is fitted. At this point the two halves were separated and the lower cowling half was carried back outside to finish sand the rough edges of the slot. 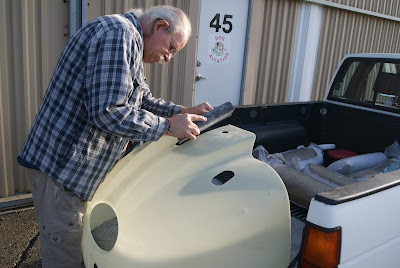 Sanding down the edges of the slot for the nose wheel gear leg. 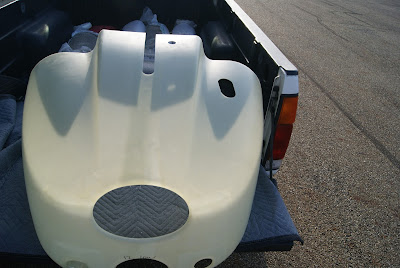 Almost there … the slot needs just a little more tweaking to get down to the scribe line.


The lower cowl will get fitted first after six pieces of hinge material are fabricated to length. Eventually the hinge material will be riveted onto the inside edges of the fiberglass cowling halves … the end result is typical the Van’s Aircraft fleet in that the cowling halves will be secured to each other and the firewall with hinges sporting removable pins.
Posted by John at 6:09 AM