Yesterday, the work session took an unexpected turn when it was realized it would be best to install the custom made mounting bracket for the controls before mounting the Switch & Fuse module. Then it was realized it would be best to install the labeling that was engraved for the controls now so they could be squared up using a jig of sorts. I opted to make separate labels for the controls so more of the powder coating would show, but that makes good alignment critical.  If I had it to do over I would consider making one large label with all the holes drilled in it. One of the down sides to the separate labels being used is the adhesive on the back is industrial … once it touches a surface for all intent and purpose it is ”there” not to be moved without destroying things.

A trip was made to the local big box store to pick up some dowel rods that match the diameter of the holes so the label could be slid down the dowel rod to stay centered on the hole. A piece of wood was used to align the top edge of the label before it was pressed onto the surface of the bracket. 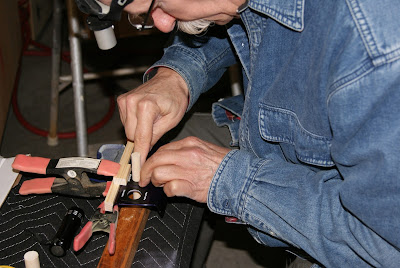 The labels turned out OK, but visually it may have been better to make one large plate instead of separate labels that ended up at various heights. But when the controls get mounted, it may not be as noticeable as it is now with nothing else to distract the eyes. 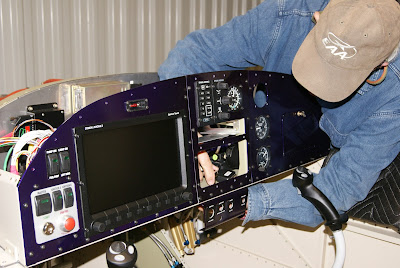 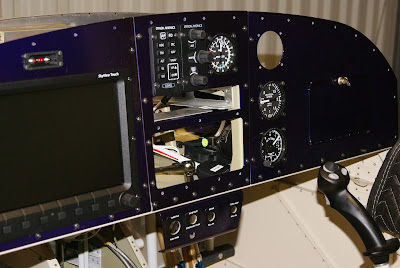 In order to install the AV-50001 Switch & Fuse module the center panel section needed to be removed, yet again, because the module sits behind the center panel section. About this time Mike came by to loan me his battery charger so it can be placed on the battery when powering up the avionics for the first time. There have been quite a few upgrades made to the SkyView software which will need to be installed from a flash drive along with a few configuration files … so it is best to have the battery on a charger while all this is being done … not to mention the time that will be spent getting acquainted with the SkyView menus. While Mike was at the hangar he helped hold the Switch & Fuse module in place while I got a couple of screws into it to hold it. 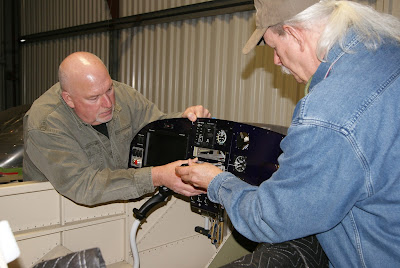 Mike helping to hold the AV-50001 Switch & Fuse module in place while I get a couple of screws into it.

Once the AV-50001 module was screwed in place, the power connector was inserted and the WH-00031 connector was screwed in place on the back of the module. The fuse slots were populated with the correct fuses which, by doing so, revealed a discrepancy on the drawings. One drawing showed a 5 amp fuse used for the radio and another showed a 7.5 amp fuse. If installing the Garmin GTR 200 radio, as will be in the DOG Aviation RV-12, the builder should use a 7.5 amp fuse and NOT a 5 amp fuse as seen on some of the drawings. Section 42G-04 of instillation manual is for the Garmin GTR 200 radio and is the source of the info for the correct fuse size. (The older Garmin SL40 radio uses the 5 amp fuse). 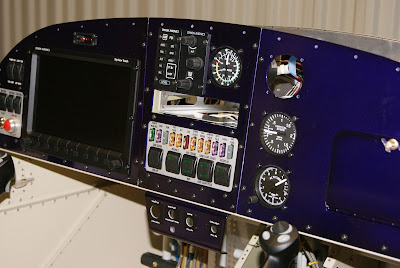