The weather was nice enough yesterday to allow for more trimming & cutting of the RV-12’s lower cowling outside. Some material needed to be removed from the inside edge of the large oval opening in the lower cowling. I had a very difficult time finding the trim line … it was very faint and could only be seen if the cowling was studied very closely while being moved around at various angles to get the light and shadows just right so it would appear. There were a few places the trim line just could not be made out at all, but fortunately enough of the line was marked that it was easy to fill in the gaps. 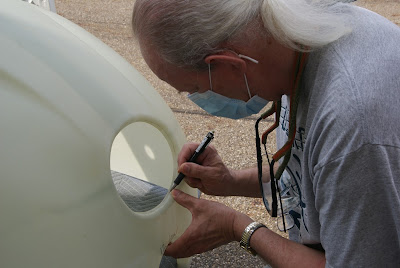 Marking the cut line on the inside edge of the oval opening on the lower cowling with a mechanical pencil.


Once again, the Dremel tool outfitted with a cutting wheel was used to trim off the excess material from around the oval opening on the lower cowling. At this time, the oval opening for the exhaust pipe was also cutout. After making the cuts, the edges were sanded down to the trim line. I ended up wrapping sand paper around a small bottle to sand down the areas where the cutout for the exhaust pipe is rounded then switched to a PVC pipe about the same size as the curve ... worked quite well. 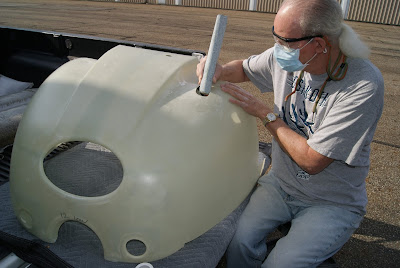 80 Grit sandpaper wrapped around a small bottle did a great job of getting down to the trim lines in the areas where the exhaust cutout is rounded. 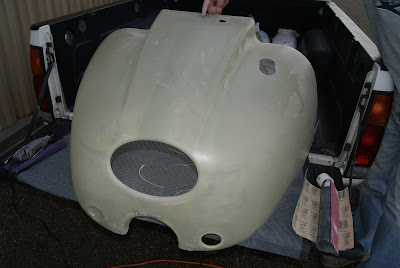 Lower cowling after sanding the areas where material was removed. My finger is pointing to the area where another cut needs to be made … but only after the lower cowl is mated with the upper cowling and a couple of holes drilled.


As can be seen in the above photo, my finger is pointing to a long slot that still needs to be cut. Prior to doing so, the instructions have the builder mating the upper cowling with the lower cowling so a couple of holes can be drilled where screws will eventually go. Cutting the slot out now will likely make the lower cowling much more flexi …. So will hold off on doing that until after the holes have been drilled … hopefully later today.
Posted by John at 6:14 AM