The task for the afternoon was to finish up fussing with the instrument panel so the upper forward fuselage skin can be screwed in place ... allowing for the fitting of the cowling halves to begin. Mike had some self-adhesive cable tie mounts that he was willing to donate to the cause so basically, the wiring was cinched up with wire ties and anyplace where it looked as though a wire could chafe, such as on the firewall, self-adhesive cable tie mounts were used to both secure the wires and to raise them off metal surfaces.

While playing behind the instrument panel, decided to rearrange the way the static and pitot lines connected onto the airspeed indicator. It was determined the lines would fit better and make for a neater instillation if the two fittings on the back of the airspeed instrument were flip flopped. The Y fitting for the static lines running to the backup instruments was secured to the side of the map box by using one of the self-adhesive cable tie mounts. 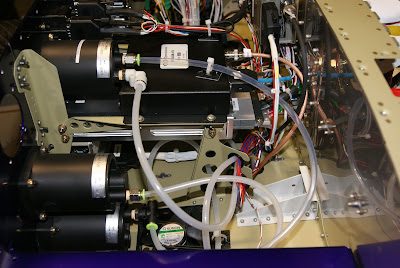 Photo of the new way the static and pitot lines run to the backup airspeed indicator. 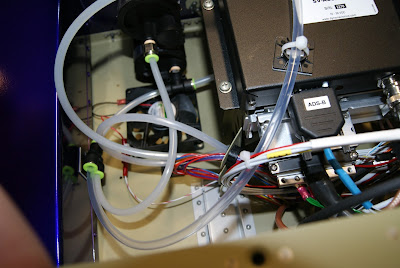 The Y for the static lines can be seen on the left of the map box attached to a self-adhesive cable tie mount with a wire tie. 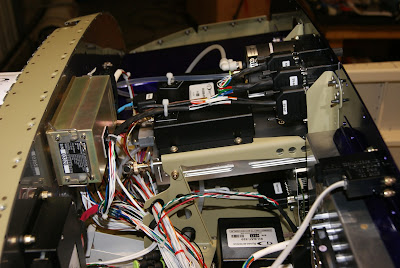 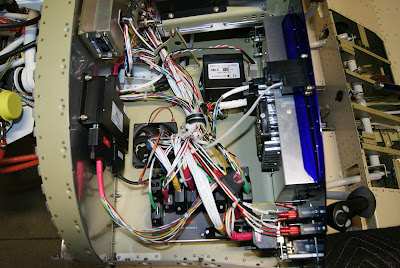 Photo of the instrument panel wiring all dressed and ready to be closed out by the upper forward fuselage skin.

The last task necessary to finish up the instrument panel was the instillation of the backup PAI 700 vertical card compass. The compass ships with black brass screws already screwed into it that are to be used as the mounting screws for the compass if it is panel mounted. Not sure if I mentioned this or not before, but all of the screws that have been used to mount the backup instruments have been brass and the screws used to mount the three instrument panel sections have been 18-8 black stainless screws. This was done in the hopes of reducing the amount of magnetic metals in the vicinity of the compass. 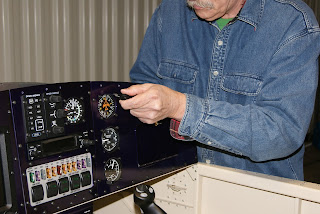 Savvy builders may have noticed there are no slots cut into the instrument panel to allow access to the compass’s two adjusting screws. This was done intentionally because of not being sure if the vertical card compass will work at all mounted where it is. Vertical card compasses can be finicky, so did not want to slice holes in the panel for the adjusting screws only to find out it won’t work there and needs to be replaced with another type of compass that likely won't use those adjustment holes . I have already purchased three inch brass screws so when attempting to “turn the compass” or adjust it, I’ll just switch over to the longer screws and push the screws forward, which will push the compass away from the panel enough to gain access to the two adjusting screws. Once the compass is adjusted as best as possible, the long screws will be replaced with the much shorter mounting screws that came with the compass. 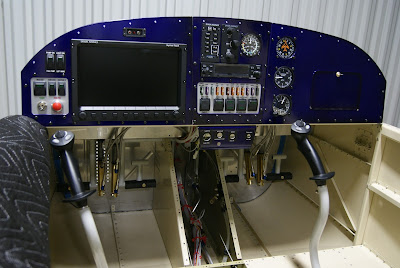