Now that the Van’s version of SkyView 14 and associated configuration files have been successfully loaded, the maps and associated databases also need to be updated as well. Dynon offers a downloadable file they call the “US quick update package” that, in addition to containing the already installed SkyView version 14 software, the file also contains the following:


The “US quick update package” file makes it easy to install the map databases after the initial loading of the Van’s supplied files without losing any of the settings. This is because the SkyView will not install the SkyView software unless the version on the flash drive is newer than the version already in the SkyView system … and in this case, it is not newer it is the same. When installing this file, the version 14 software is immediately skipped over and only the additional data base information is installed in the SkyView.


In addition to the above quick update file, there are two additional files that Dynon recommends the user loads during initial SkyView instillations … they are the High Resolution Terrain database for North America and the Base Map for North America so they were added onto the flash drive as well.


The flash drive with the US quick update package and the additional two database files was inserted in the USB port and buttons 7 & 8 were pressed to enter the setup menus then using the same methods covered in the previous post, navigated to the Load Files menu where the files on the flash drive could be seen. The first file selected was the Skyview 14 US package .DUC file that is the US quick update package file. 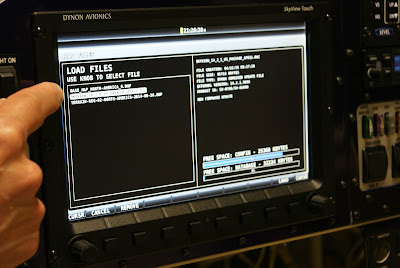 Selecting the SkyView 14 US package .DUC file to load … because the SkyView is already up to date, the version 14 software will not be reinstalled … however, the additional map database files contained in the US quick update package will be automatically installed.


Next the Base Map for North America was loaded … not sure if this was necessary because I think the Skyview is ships with this file already installed … but I installed it anyway because there was an update around the time I purchased the Avionics kit so wanted to make sure the latest version was installed. The base map instillation was followed by installing the High Resolution Terrain database. 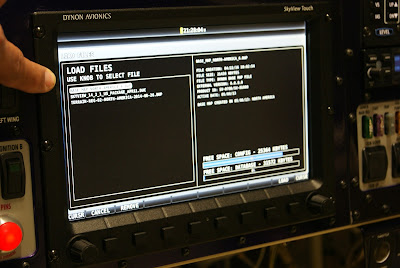 Selecting the Base Map for North America to be installed when the Load button is pressed. 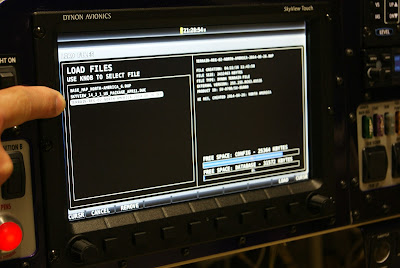 Selecting the North America High Resolution Terrain database to be installed when the Load button is pressed.


After loading all the map database files, the SkyView began showing much more detailed information on the map along with airport information for my current location. 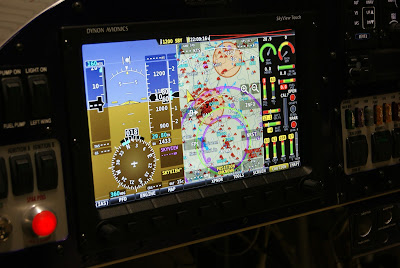 After loading the map database files, the map began showing much more detailed information as can be seen here. Much more informative than a big red X.
Posted by John at 7:27 AM