Yesterday, was another momentous milestone at DOG Aviation … the electrical system was powered up for the first time followed shortly thereafter by the avionics. Happy to report there was no smoke or blown fuses and all the electrical components and Dynon Skyview Modules appear to be playing nicely together. More on that later.


Prior to powering up the system a few tiny tasks were completed beginning with completing the instillation of the static and pitot lines to the backup instruments. Once a final routing for the lines was established the fittings for the poly lines were screwed into the instruments. The lines can be run in no particular order. 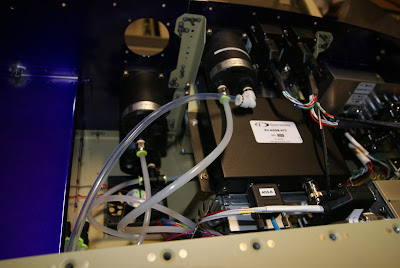 Photo of the static and pitot lines running to the backup instruments. 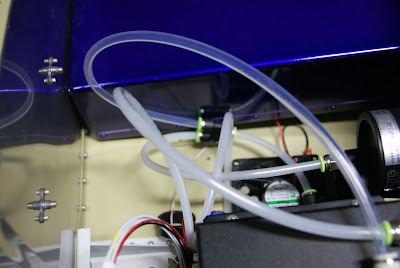 Another view of the static lines.


As can be seen in the above photos, the static line from the tail cone goes into a T on the altimeter (located above the fan) from the T a line is run to a Y that is barely visible along the edge of the map box.. From the Y static lines are run to the vertical speed indicator above the altimeter and over to the airspeed indicator mounted in the center panel. The pitot tube only goes to the airspeed indicator and is attached to the port on the right side of the instrument (the one with the straight fitting).


The last two remaining items left to install for the avionics was the transponder antenna and the Garmin GTR 200 radio. With Mike’s help the transponder antenna was a snap to install after a little paint and primer was removed in the area where the grounding washer sits. The short stubby antenna is secured by one nut onto the belly of the fuselage. Mike inserted the antenna from below and I placed the lock washer on the threaded shaft that entered the center tunnel and then tightened down the screw and placed the antenna wire on the BNC connector. The Garmin GTR 200 radio was also a snap to install it just slides into its mounting tray and is locked in place by placing a 3/32" Allen wrench (think that was the right size) into a tiny hole on the front panel near the right edge of the radio and turning the locking screw clockwise. You will see the radio get pulled in a little farther then the screw gets tight. For those builders wondering why the radio was installed last, it was only because the static line was looped around under the radio and needed to be installed into the T fitting on the altimeter. It was very convenient to be able to reach down through the opening in the radio’s mounting tray to insert the static tubing into the T.


The moment of truth …. “The smoke test”.  First the master switch was cautiously flipped On (with a fire extinguisher nearby) and there was no smoke or blown fuses! The SkyView went through its boot process and displayed three big X’s across the screen one for the ADHARS, one for the EMS and one for the GPS.  Not to worry this is normal because the hardware has not been configured yet. Prior to configuring the hardware the Dynon system FORCES the user to set up the N number for the airplane ... without establishing the N number the setup menus are grayed out and won't allow the user to get to the configuration menus. I don't have an official N number so I entered one of the two I have reserved and most likely to use.  After configuration of the hardware, the screen will look like the one below. I still have a red X for the GPS because I was inside the hangar due to rain and snow outside and the GPS can't acquire satellites. 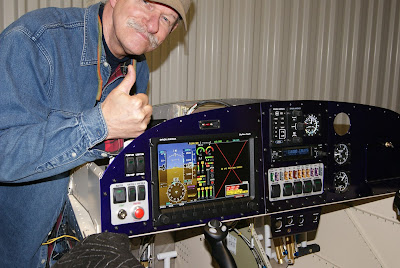 The results after configuring the SkyView hardware and loading the updates and associated settings files.