Work continued on prepping the stabilator parts because life once again got in the way of aircraft construction. There was not enough time for the Sanchem metal treatment process so decide to move on and prep more parts.

I was able to get in a few hours of work through the course of the day and worked on deburring all the surfaces of the parts that make up the spar box. After that, looked ahead in the plans and the next items to be made were hinge stops, so I decided to go for it and made them.

The plans call for the four tubes that make up the hinge stops to be made from a single piece of 5/16” aluminum tubing which is precision cut into four tubes each 21/32” long. The tolerances are stated to be -0 and +1/32”. This just begs for a lathe but that is out of the question, so DOG Avaition used the poor man’s lathe method of sizing the tubes.

The tube was chucked up in the drill press and spun into a coarse file then onto a smooth file to square up the end. Next the pipe was marked a 1/32” longer than the desired 21/32” and carefully cut on the band saw. The freshly cut slightly oversized hinge stop was then placed back into the drill press and the fresh band saw cut was worked into the smooth file to the proper size. I split the difference for the oversize tolerance and made the four spacers a 1/64” over the required 21/32”. 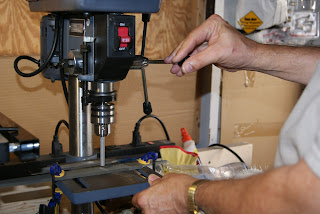 Hinge stop tubing chucked into drill press about to be worked
into a file to square the end of the pipe. 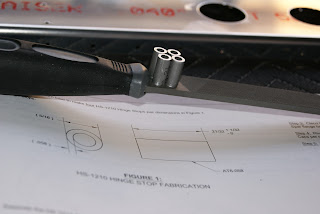 The four hinge stops on the file are all the same length … although looking at
the photo they don’t look that way because of the angle of the camera.