The only items worked on during this shop session were the F-1270 left and right fuselage skins. The spar cutout was completed on the F-1270-L fuselage skin using the same procedure that was used to make the cutout on the F-1270-R skin yesterday …. a nibbling tool to remove the metal and a file to smooth out the edges.

Now that the spar cutouts have been completed for both fuselage skins, each skin received a deburring along the edges with files, followed by a final smoothing with the Scotch-Brite wheel and a 3M sanding sponge. 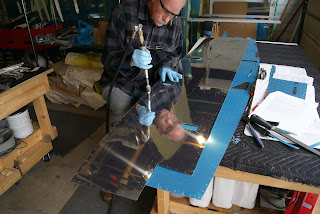 Smoothing the edge of the F-1270-L fuselage skin with a Scotch-Brite wheel.
After both F-1270 fuselage skins were deburred and smoothed, they were dimpled using the #30-120 degree dimple dies in Pete’s C-frame. Three areas were purposely not dimpled at this time:
1. The previously mentioned NDZ (no dimple zone) where the F-1270A stiffener will be located. This area will not receive any dimples because it will be hidden by the wings.

3. The rivet holes surrounding the air vent are undersized and are to be match drilled into the vent assembly … that assembly may not be ready before priming, but hoping to complete the air vent parts tomorrow so the match drilling and dimpling can be accomplished before Tuesday … which is the target day for spraying primer. 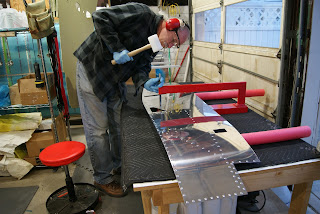 Dimpling the F-1270-L fuselage skin with Pete’s C-frame outfitted with
#30-120 degree dimple dies for the flush rivets being used on the RV-12 project. 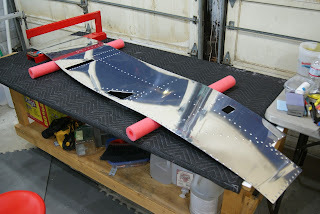 Dimpled F-1270. Looking closely one can see the top row of rivet holes were not dimpled for flush
rivets at this time, nor were the holes around the rectangular air vent port on the far right.
Posted by John at 7:37 PM