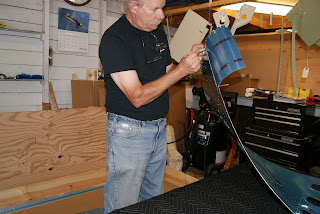 Marking the area where the W-1276 fuselage bottom skin overlaps one of the W-1274 side skins.
Once the overlapping areas were marked, the blue protective film was removed from the edges of the W-1274-L&R skins by using a soldering iron to melt the plastic film. While the soldering iron was still hot, it was used to melt the outlines of the doubler plates that were drawn onto the bottom skin weeks ago. The reason for this is because the doubler plates were too thick to dimple and were machine countersunk for flush rivets ... therefore all rivet holes in the W-1276 fuselage bottom skin associated with the W-1268 doubler plates will not be dimpled for the flush rivets being used to build the RV-12. 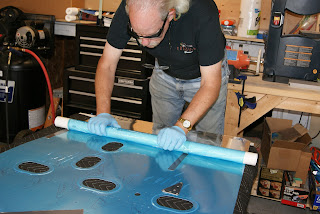 Using a PVC pipe to aid in the removal of the blue plastic film from the W-1276 fuselage bottom skin. 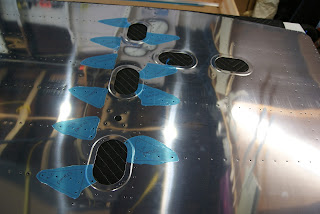 Remaining blue film shows the areas where the rivet holes in the W-1276 are associated with the W-1268 doubler plates. No dimples will be created in these areas because the W-1268 doublers have been machine countersunk for flush rivets.
After removing the blue film from the W-1276 bottom skin, the dust was blown off Pete’s C-frame (which has not been used since last fall) along with the mallet. The C-frame was outfitted with #30-120 degree dimple dies for the flush rivets being used on the project. After donning eye and hearing protection, the pool noodles were placed under the W-1276 bottom skin to elevate it to the level of the dimple dies and the W-1276 skin was beat into submission … leaving perfectly formed welts at every rivet hole. 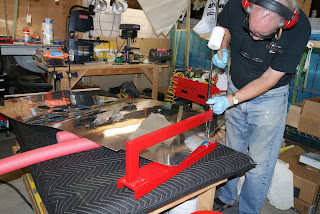 Whacking the C-frame plunger (outfitted with 120 degree dimple dies) with a mallet to create dimples in the W-1276 fuselage bottom skin for flush rivets. 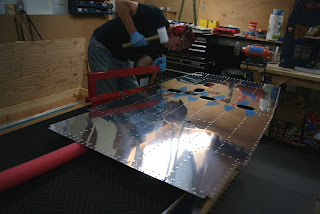